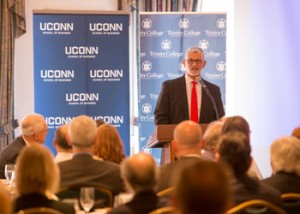 Paul Assaiante addresses the crowd at the Hartford Club. Photo by Tom Hurlbut

Paul Assaiante, Trinity College’s men’s squash and tennis coach, author, and motivational speaker, was the featured speaker at the annual Bradley, Foster & Sargent luncheon at the Hartford Club on May 7.

This was the sixth year that Hartford-based investment advisory firm Bradley, Foster & Sargent has sponsored an annual luncheon and lecture in partnership with Trinity College and the University of Connecticut School of Business. Each year, a featured speaker addresses a topic of interest to the local business and finance community, and the audience includes students from Trinity and the UConn School of Business who have participated in Bradley, Foster & Sargent’s internship program. This year’s luncheon was attended by a crowd of more than 200.

In his talk, “Coaching to Overcome Fear,” Assaiante shared lessons from his years of building and coaching teams of champions at Trinity − lessons that pertain equally well for leaders striving to encourage daily effort and focus under pressure with teams in the business realm. He also let the crowd in on the news that his book, Run to the Roar: Coaching to Overcome Fear, will be made into a movie, though casting has not yet taken place.

Assaiante, who has been the coach of the U.S. national squash team as well as the U.S. Olympic Coach of the Year, talked about his infectious passion for squash, his successful coaching philosophy (face your fears head-on), and how he recruits talented young men from around the world, molds them into a team, and drives them to achieve unparalleled success.

As head coach of Trinity’s men’s squash team, Assaiante led the team to its 19th consecutive College Squash Association National Championship this year, where they won their 15th national title. The team holds the longest winning streak of any college team in any sport in history under Assaiante’s leadership: 13 consecutive NCAA national titles and 252 consecutive match victories. His men’s tennis teams have consistently been ranked both regionally and nationally.

Because the business environment can be as unpredictable as the squash court, Assaiante said, preparation, mentoring, and teamwork are important factors in both realms. “I’ve come to believe in the importance of preparation – and in my case, that means practice,” he said. “I also encourage our young men to live every day as if it’s your last. Whether they’re preparing for a chemistry lab, practice, or dinner at Mather Hall, I tell them to make it the best lab, practice, or meal ever.”
​
Assaiante said he is concerned about the new millennials. “We’re not letting our kids fail enough, not giving them enough ownership over their journey.” But he said that workplace internships, such as the ones students in the audience have participated in with Bradley, Foster & Sargent, go a long way toward providing college students with the real life lessons they need to experience.

A member of the Trinity College faculty since 1994, Assaiante’s early career included coaching squash and tennis at the U.S. Military Academy at West Point and the Princeton Club of New York. He is a graduate of Springfield College with a master’s degree from Long Island University.