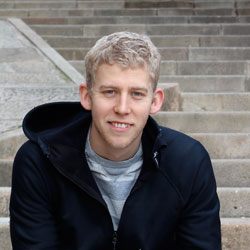 Research by Trinity College Assistant Professor of Mathematics Per Sebastian Skardal on dynamical systems, with many possible biological and technological applications, was published August 21 in the online journal Science Advances.

Titled “Control of coupled oscillator networks with application to microgrid technologies,” the paper was written in collaboration with co-author Alex Arenas, who served as Skardal’s postdoctoral research adviser at the Universitat Rovira i Virgili in Tarragona, Spain. Their research has implications as widely varied as developing small, independently operating power grids and stabilizing dangerous heart rhythms.

Skardal is an applied mathematician with a particular interest is dynamical systems – which he describes as systems that evolve in time – and their ties with complex networks. “I use the example with students these days of Facebook. Everyone goes on Facebook; it’s a social network, so you have these links connecting different people if they’re friends,” he said. “I study how different groups of people or objects interact and how those interactions lead to particular behaviors. I’m particularly interested in when something big happens in the network, when all the objects start behaving similarly, or when an epidemic grows into a big thing that affects a lot of people.”

This line of research led Skardal to many examples of complex networks in nature that sometimes synchronize and sometimes don’t. “For example, we can observe fireflies in Southeast Asia. The males will actually synchronize their flashing,” he said. “This is actually a pretty phenomenal thing that’s going on.”

Another biological example can be found in cardiac pacemaker cells, which Skardal said have to synchronize so they can send signals to the rest of the heart, and in regions of the brain that need to synchronize for brain activity to work. “And we all synchronize our biological clocks – our circadian rhythms – to the sun or whatever light you see,” he said.

The power grid is one example of mechanical synchronization that is generating a lot of interest now and is one of the theoretical applications that Skardal said inspired the paper.

This new research posits what Skardal calls a cheap and easy method to control synchronization. “What we are interested in here is that these systems generally won’t be automatically synchronized,” he said. “We used what has been discovered in these types of systems and found a nice way to build in a cheap control mechanism. It’s a mechanism of building a descriptor for the system and then being able to identify oscillators – or in this case, sources or loads – that require some sort of intervention to stay synchronized with the rest of the population.”

To put it simply, he said, “We’re adding a little discipline to the poorly behaved oscillator.”

Skardal hopes that this research could contribute to the continuing development of microgrids, which he said are smaller power grids that can operate in isolation from the larger power grid. “They can be connected, but they have the functionality of operating on their own,” he said. These may be used in less-connected parts of the world, and they tend to use more green energy, Skardal said, because they don’t need to be fueled by large power plants.

While this paper focuses on the power grid application, Skardal said he is looking forward to exploring many more theoretical and practical applications for his research. “What we really believe and hope for is that these ideas are actually much more general,” he said. “For instance, when a heart is beating asynchronously, in a ventricular fibrillation sort of state, we could use these ideas to synchronize systems using as little control as possible.

A new member of the Trinity College faculty as of July 1, 2015, Skardal holds a B.A. from Boston College and an M.S. and Ph.D. from the University of Colorado at Boulder.

Science Advances is an online-only open-access journal established earlier this year by the American Association for the Advancement of Science, the publisher of Science. The peer-reviewed journal rapidly publishes high-quality, original research in all disciplines of science.

An article about Skardal’s paper has been published by IEEE Spectrum here.