Trinity College is hosting an exhibition by 2015-2016 McGill Visiting Assistant Professor in International Studies Anida Yoeu Ali called “The Red Chador: What Is It You Fear?” The exhibition, which runs from November 3 to December 14, 2015, at the Widener Gallery at the Austin Arts Center, features videos and photos of performances in both Paris and Hartford.
​ 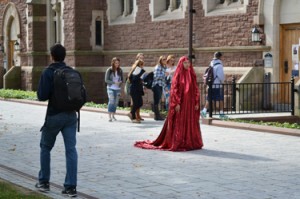 ​The Red Chador on the Long Walk at Trinity College. Photo by Andrew J. Concatelli

The purpose of Ali’s performance project is to pose the question, “What do you fear?” by using religious aesthetics to provoke ideas of otherness. Ali said she wants to make her audience aware about the perpetuated fear toward Islam, and she is committed to transforming those perceptions through her performance art. For this exhibition, the artist walked silently through public spaces in Paris and Hartford wearing a bright red sequin chador, or “Muslim” headdress, and documented reactions to her presence.

While earning her master’s of fine arts degree, Ali was fascinated by the concept of visibility and invisibility. As the concept has undergone change, so has Ali’s medium of art. She began as a spoken word artist, but moved into performance art. “Performance art is an intervention,” she said. “It has an element of surprise and shock that creates authentic reactions.”

To begin work on this piece, the artist went through a scouting process to select the spaces for her performances. Ali spoke to her colleagues, friends, and students to understand the local flavor of the environment. For instance, the exhibition includes a photograph of the Red Chador praying at an abandoned coal factory because she interprets the dome structure as a mosque. Ali said the image is rather absurd and humorous, but it touches on the concept of feminism within Islam.
​
The exhibition consists of photos and recordings of the Red Chador in public spaces, including Trinity College. Ali received a variety of reactions from the Trinity community as she walked in the chador around campus on October 21. Specifically, she said that she sensed a lot of tension on the Long Walk, and she heard a lot of profanity from students in the dorms of Jarvis Hall. Many wondered who she was and why she was dressed like that. These are the types of reactions that Ali seeks to provoke. Contrastingly, she was greeted by young women rapping on a bench, and she sat down to listen to them, nodding her head.

“The Red Chador: What Is It You Fear?” is on display at the Widener Gallery at the Austin Arts Center through December 14. The gallery hours are 1:00 p.m. to 6:00 p.m., Sunday through Friday. The gallery is closed on Saturdays, and November 25-29 for Thanksgiving. For directions and a map of the Trinity College campus, please click here.

Anida Yoeu Ali is an artist, scholar, and global agitator. Ali is the 2015 winner of the Sovereign Asian Art Prize and is currently the 2015-2016 McGill Visiting Assistant Professor in International Studies at Trinity College. Ali utilizes an interdisciplinary approach to artmaking, so her installation and performance works investigate the artistic, spiritual, and political collisions of a hybrid transnational identity. Ali’s works have been exhibited at the Asia Pacific Triennial, Palais de Tokyo, Fukuoka Asian Art Museum, Musée d’art Contemporain in Lyon, Southeast Asia ArtsFest in London, Malay Heritage Centre, and Singapore International Photography Festival. She has received grants from the Rockefeller Foundation, Ford Foundation, the National Endowment of the Arts, and the Illinois Arts Council. She earned her B.F.A. from the University of Illinois at Urbana-Champaign and an M.F.A. from School of the Art Institute Chicago. She is a collaborative partner with Studio Revolt, a trans-nomadic artist-run media lab whose controversial works on deportation have caused White House interns to be fired. www.anidaali.com