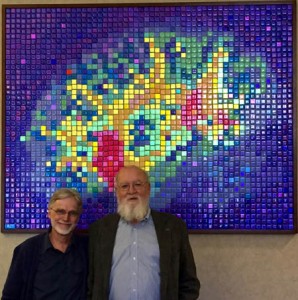 Probably we’ve all met people whose brilliance is so apparent that we exclaim, “Wow, I wish I had that brain!” My personal list of admired brains is headed up by philosopher Daniel Dennett, director of the Center for Cognitive Studies at Tufts University. Dennett has written extensively on the mind, evolution, and religion, and is one of the leading public intellectuals of our time. In addition, Dan Dennett has been a mentor and friend, beginning during my short stint as a graduate student adjunct instructor at Tufts. His books are worthy of admiration, but it’s in conversation that his brilliance shines brightest. His advice to me has always been, “Be bold!”

A few months ago, my wish to acquire Dennett’s brain was fulfilled – in a manner of speaking. With the help of Dr. Michael Stevens at the Olin Neuropsychiatry Research Center (part of the Institute of Living, two blocks from Trinity), I peered into Dennett’s brain using functional Magnetic Resonance Imaging (fMRI), the technology behind many of the glowing brain images that we all have seen in the media. Fortunately the scan left Dennett’s actual brain intact; my takeaway consisted of 12 gigabytes of 3-d snapshots of his cranium, taken about every half second.

What can you see in a scrapbook with 8,000 images? To ask what you see may not be quite the right question. Instead, what do you hear? My current research at Trinity is informed by the radical hypothesis that brain dynamics resemble the dynamics of music. There are many ways to explore this idea (click here to read an empirical study of the idea). But a more entertaining approach is through “sonification,” the process of converting data to sound. Sonified data can have a variety of sonic properties. In my work I favor data translations that use familiar musical scales and instruments. I’ve taken this path because we are all extremely sensitive data filters (i.e. listeners) in musical idioms we know well. Ultimately, I imagine an “fMRI stethoscope” that could be a diagnostic tool for mental disorders like schizophrenia or ADHD. Trinity has uploaded a podcast and slideshow of my recent talk on this subject here.

All brains are musical – you and I are symphonies. Dennett’s brain is symphonic, too; you can listen to it here. Is his brain different from others’? That’s a question for further research. (As I write, software is crunching through the numbers from the scan.) 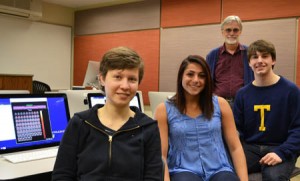 I like that a past teacher of mine is still sharing his thoughts, even though the medium is strange and new. I, in turn, am sharing Dennett’s brain (and what I’ve learned from him) with my current research students: Naty Bush ’19, Nadine Taghian ’17, and Mike Zarra ’19. These young scientists might take some ideas from my research and run with them. Even better, they will hatch new ideas, marching toward their own bold horizons. From teacher to student to student, the torch passes.

Written by Dan Lloyd, Brownell Professor of Philosophy
For other examples of Lloyd’s brainmusic, visit his YouTube channel.