Research by Trinity College Associate Professor of Physics Brett Barwick contributed to a breakthrough in the field of imaging nanoscale optical fields that was published in the journal Nature Communications earlier this month. 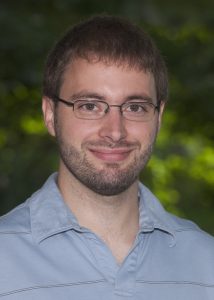 The project was led by Fabrizio Carbone, a researcher at the Swiss research institute and university Ecole Polytechnique Fédérale de Lausanne (EPFL), and exemplified international collaboration. Scientists made contributions from institutions around the world, including the University of Glasgow, EPFL’s Interdisciplinary Center for Electron Microscopy, Boston University, the Barcelona Institute of Science and Technology, and the Institució Catalana de Recerca i Estudis Avancats. The project was funded by the European Research Council (ERC), the Swiss National Science Foundation (NCCR-MUST), Trinity College, the Connecticut Space Grant Consortium, and El Ministerio de Economía y Competitividad (Spain).

Barwick and the team of researchers developed a new technique that can track light and electrons through a nanostructured – very tiny, very thin – surface. The silicon nitride membrane array used in the project was only 50 nanometers thick (one nanometer is equal to one billionth of a meter) and was covered with an even thinner layer of silver. When light couples with electrons, they move together as a single wave guided by the shape of the surface itself. These waves of light and electrons are called “surface plasmons” and could potentially be useful in the future of telecommunications and computing, where data can be moved across processors using light instead of electricity. Before this breakthrough, there was no way of tracking the guided light, or plasmons, as they move across the surface buried under the thin silver layer. Now, there is a way of seeing and tracking these buried plasmons, which move at speeds close to speed of light.

The scientists working on this project created a tiny antenna array that would allow the plasmons (light and electrons) to travel across the buried surface. They then punched microscopic nano-holes into the array, which would act as the antennas, or hotspots for the plasmons. Using the ultrafast technique they developed, the researchers were not only able to see the propagation of the guided light, but they were also able to film it – even when it is bound to a buried interface.

This breakthrough and subsequent research paper pave the way for designing and controlling confined fields of plasmons in multi-layered structures where interfaces might be buried underneath one another. This is important for creating future devices that combine light and electronics, commonly referred to as the field of optoelectronics.

Lead researcher Carbone explained the project using an analogy. “Trying to see plasmons in these interfaces between layers is a bit like trying to film people in a house from the outside,” Carbone said. “A regular camera won’t show you anything; but if you use microwave or a similar energy-tracking imaging, you can see right through the walls.”

Barwick travels yearly to work with Carbone and his group members in Lausanne, Switzerland, to complete collaborative experiments. This particular project started during Barwick’s sabbatical there in spring 2014. Barwick said, “Future optoelectronic devices based on these very tiny and sensitive nanostructures will likely need to have protective layers coated on them.  The technique that we have developed allows us to see through those layers and capture the circuit’s dynamics, which would otherwise be invisible.”

Barwick joined the Trinity physics faculty in 2010 and his research interests include experimental studies of fundamental quantum mechanics using ultrashort packets of electrons and probing interactions between photons and electrons on the nanoscale. He teaches both upper level and introductory level courses in the Physics Department and has published numerous scientific articles, some with Trinity students as co-authors, in publications such as Review of Scientific Instruments, Nature Communications, and Optics Express.