A research paper co-authored by Trinity College Assistant Professor of Mathematics Per Sebastian Skardal and summer research students Mariam Avagyan ’18 and Shufan Wang ’18 was published recently in the online journal Applied Network Science. Avagyan, who is from Yerevan, Armenia, is pursuing a double major in mathematics and engineering, with a concentration in electrical. Wang, from Zheng Zhou City, He Nan Province, China, is majoring in mathematics. 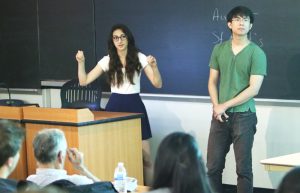 The research paper, titled “Evolving network structure of academic institutions,” explores and illustrates the complex structures that dictate interactions between the administration, faculty, and student body at Trinity. Skardal, Avagyan, and Wang used the majors and minors of graduating students to track the changing relationships between different academic departments over time. The results, the researchers said in their paper, provide practical insights and applications for Trinity, and also serves as a general framework for colleges and universities to better understand their own structural makeup in order to better inform academic and administrative policy.

The students lived on campus during the summer as they worked with Skardal throughout the research process as part of the Summer Science Research Program, offered through Trinity’s Interdisciplinary Science Center. (Click here for a video about the Summer Science Research Program.) Skardal said, “It really gives the students a chance to use what they have learned in the classroom in a practical setting and learn about some cutting-edge mathematics and science.” Skardal, who came to Trinity in 2015, added that he valued the knowledge of Trinity that Avagyan and Wang brought to the project.

Avagyan first became interested in Skardal’s work with fractals, dynamical systems, synchronization, and networks during one of the Math Department’s colloquiums, where professors talk about their areas of research. An independent study with Skardal for Avagyan and Wang in the spring 2016 semester led to their summer research.

Throughout the summer the group worked together on brand new applied mathematics and techniques. Skardal said one of the best aspects of working with Avagyan and Wang was their drive. “They were incredibly motivated the whole way,” he said. When he was an undergraduate student at Boston College, Skardal had the opportunity to do some research in computer science and described it as a “wonderful experience” that encouraged him to offer the same opportunities to students at Trinity. “It sounds cliché, but teachers learn just as much from their students as students learn from teachers, and this is equally true in the context of research,” said Skardal.

Avagyan and Wang described Skardal as supportive and encouraging. Avagyan’s time working with Skardal has even shaped her future aspirations. “He made me love applied math to the point that I want to continue my post-graduate studies in this area,” she said. “Being credited as an author on a published study with a brilliant person and professor like him is an honor.”

Both Avagyan and Wang expressed appreciation for their experience and excitement for gaining authorship of the published paper. Wang, who is studying this semester at Dartmouth College to do more work in math modeling and machine intelligence as a part of the Twelve-College Exchange Program, said, “It showed me what it is like to work in academia and led me into thinking about becoming a researcher.”

The students recommend summer research work to others at Trinity. Avagyan said, “Working with professors over the past two summers was the best thing I’ve done at Trinity. It gave me a jump start in academic research as a first-year and helped me develop essential skills such as working in a team, solving a problem even though it seems to be impossible, working with established professors in the same lab, and more.”

Skardal also encourages Trinity professors to offer more research opportunities to students. “It is always fun to see our students ‘graduate’ to the point of taking on some really new, interesting problems outside of the typical classroom,” he said.