Hartford, Connecticut, January 19, 2018 – Trinity College Associate Professor of International Studies Janet L. Bauer has received a Fulbright Global Scholar grant—an award designed to support multicountry, transregional projects—for her research project on The Social Geographies of Islam in Diaspora: Race, Gender, Generation, and Place. With this $25,690 Fulbright award, Bauer is engaged throughout the 2017-18 academic year in research at sites in Canada, Germany, and Trinidad and Tobago.

Bauer’s area of specialization is the ethnography of mobility and gender in Islamic societies, a focus that began when she was a graduate student at Stanford University, where she earned both her M.A. (1976) and Ph.D. (1981) in anthropology. During the past 25 years, she has continued to address questions about Muslim women in diaspora through her longitudinal research, following the same populations over several generations in different Muslim-minority societies. This includes ongoing collaborative research with her Trinity students working among refugee groups in the metro Hartford area. 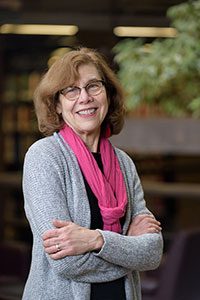 “The Fulbright research represents the culmination of my work on Muslim diasporas in which I am focusing on women’s activism and their engagement—or nonengagement—with Islamic heritage,” said Bauer. “My goal is to increase our understanding of how immigrants—in this case, Muslim women and youth—use both local and global ties to successfully negotiate places of belonging for themselves and their communities. Using a comparative approach has allowed me to contrast the role of different contexts—of multiculturalism, of specific places, and of immigrant histories—in shaping this process.”

Bauer, a Trinity faculty member since 1984, completed the first segment of her Fulbright project during fall 2017, conducting research in Trinidad and Tobago, hosted by the Institute for Gender and Development Studies at The University of the West Indies. Beginning in February 2018, she will be based for three months at the Institute on Globalization & the Human Condition at McMaster University in Hamilton, Ontario. Then, from May to July, she will be in Germany, where her host institution will be the Max Planck Institute for the Study of Religious and Ethnic Diversity in Göttingen.

“Each of these sites provides a unique set of circumstances for better understanding the challenges faced by Muslim women in Muslim-minority contexts,” Bauer said. “This includes anxieties that can arise within Muslim communities because of ethno-cultural differences in religious traditions or generational differences, as well as pushback from non-Muslims.

“Across the globe, Muslims are confronting an onslaught of negative stereotypes and a fear of Islam,” said Bauer. “It’s important to avoid generalizing about Muslims, especially Muslim women, and to remember that most of our Muslim neighbors are an integral part of our communities, leading productive lives.”

Bauer’s current Fulbright project builds upon her prior research projects, which include: “The Americanization of Muslim Refugees in a Majority-Minority City: Understanding Black-Latino-Refugee Relationships in Hartford;” “Race, Gender, and Community in Muslim Trinidad;” and “Iranian Women and the Politics of Exile.” Her current research, she noted, will further inform her work with Trinity students and with Muslim communities in Hartford and elsewhere around the world. She plans to produce a book-length monograph on gender and race in Muslim diasporas following her return to Hartford from Germany.

Since 2014, Bauer has served as a commissioner on the City of Hartford’s Commission for Refugee and Immigrant Affairs. She is a moderator for the “Honest Conversations with Your Muslim Neighbors” program of the Connecticut Council for Interreligious Understanding. She also is active with local organizations supporting immigrants in Hartford, including the Asylum Hill Neighborhood Association Welcoming Committee, the South Marshall Interfaith Coalition, and Hartford Public Library’s Immigrant Advisory Group.

The Fulbright Program is the flagship international educational exchange program sponsored by the U.S. government and is designed to increase mutual understanding between the people of the United States and the people of other countries. The Fulbright Program is funded through an annual appropriation made by the U.S. Congress to the U.S. Department of State. Participating governments and host institutions, corporations, and foundations around the world also provide direct and indirect support to the program, which operates in more than 160 countries worldwide.