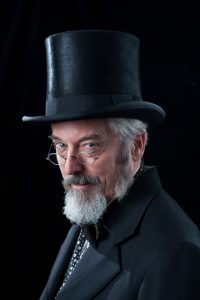 Hartford, Connecticut, November 17, 2017—Trinity College Associate Professor of Theater and Dance Michael Preston’s favorite thing about playing Ebenezer Scrooge in A Christmas Carol at Hartford Stage is undergoing the miserly character’s transformation. “I love Scrooge because he gets redemption,” Preston said. “It’s a great journey because I get to make that switch. Scrooge becomes the positive, and that’s the thing that we all crave—for things to change in a positive way. The story never gets old.”

This year’s production of the classic Charles Dickens story, which opens on November 24, marks the play’s 20th anniversary at Hartford Stage. Preston is taking over the lead role from Bill Raymond, who had performed as Scrooge since 1998 before retiring last year. “The main thing I’m taking from Bill is that you have to care about Scrooge; you have to want him to change. Bill did that in a lovely way,” Preston said. “The audience needs to care enough about Scrooge so that when the change comes, it resonates.”

Preston has been involved with A Christmas Carol at Hartford Stage since 2011, playing the inventor Mr. Marvel. Last season he had the opportunity to serve as an understudy for the role of Scrooge. “I learned the part and had two half-days of rehearsal with the cast. I didn’t know if I would enjoy doing it, and I had a really good time,” Preston said. “I was surprised how mean and vicious I got and how I enjoyed exploring the dark side along with the humor.” He was offered the lead role after Raymond’s retirement was announced.

Preston said that he finds himself relating to Scrooge’s confrontation with mortality. “The ghost that really causes him to change is the ghost of the future and seeing his own gravestone, which tells him that it’s time to wake up, that this life isn’t infinite,” Preston said. “I had a heart attack five years ago—it was a minor one and I’m okay, but it certainly raises those questions. When one gets to this age, there’s the fear of the unknown and the fear of ending your life, which is the great common fear that we all have and that we all don’t know what to do with.”

Preston, who teaches acting, stage production, and playwriting at Trinity, has been sharing a teaching position with his wife, Associate Professor of Theater and Dance Barbara Karger, since 2004. He was first introduced to the theater when his mother got a job as the registrar at the Yale School of Drama. “I was 13 or 14, and when they needed a kid, they called upon me,” Preston said. “I was terrified on opening night of my first show. I didn’t want to go on. But I did it, and I fell in love with the students of the drama school at the time—Meryl Streep, Sigourney Weaver—and it was the most magical world. I acted in high school, and I tried to give it up in college, but I kept getting drawn back into it.” Preston studied mime, circus, clowning, and comedy while living and working in New York City. From 1991 to 2000, he toured the world as one of the juggling Flying Karamazov Brothers, which included three different runs on Broadway.

The opportunity to teach at Trinity came from Professor of Theater and Dance Emerita Judy Dworin ’70, with whom Preston had worked during his time as a member of the Shaliko Company, founded by Leonardo Shapiro. “She needed a teacher, so my wife and I came up and did four classes,” Preston said. “We had said, ‘Let’s try it for a year.’ That was 13 years ago.” He said that balancing teaching and a career in theater is challenging, but he believes students benefit from having working professionals as instructors. “I think students get our passion about it being an option for their life and that they can do this,” he said. 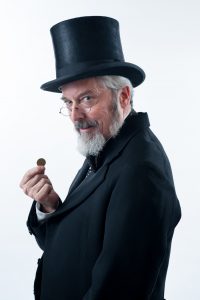 To Preston, learning to create and appreciate art is an integral part of a liberal arts education. “The arts add an immeasurable amount to the life of a college and to the life of the students,” Preston said. “The arts are about what make us human and about opening yourself up to your full potential. We want people coming out of a liberal arts college to be the most human they can be. We’re lucky to have a place like Hartford Stage—one of the best regional theaters in the country—right here. They’re doing incredible work all the time.”

Rachel Alderman, the director of A Christmas Carol, said that Hartford Stage is thrilled to welcome Preston to his new role. “The fact that Michael has been involved for the past six years and that he’s going to take the lead in the show this year is just another wonderful way that Hartford Stage and Trinity are able to help knit the city together and also highlight the city’s cultural capital,” Alderman said.