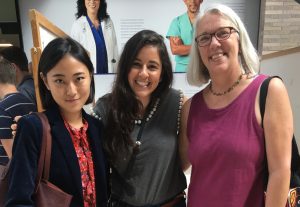 Student Nicole Duan ’18 (left) and Trinity College Research Associate Professor Terri Williams (right) with Trinity alumna Sara Khalil ’15 at a symposium where Duan presented a poster in the fall of 2017.

This NSF grant was provided to Williams in collaboration with Lisa Nagy, a professor at the University of Arizona. A portion of the funding will be used to give students the opportunity to go to Arizona and conduct research during the summer. “Students can perform experiments and use laboratory equipment not otherwise offered through science research programs at liberal arts colleges,” Williams said. “The students will film live Tribolium embryos using a confocal microscope, which allows them to observe development in real time.”

Williams provides each of her students with individual attention and comprehensive training when she works with them on research projects. Nicole Duan ’18 has been working with Williams since her sophomore year. “She doesn’t train all of her students the same way. She makes adjustments according to how each student works in the lab,” Duan said of Williams. “For me, every time I accomplish something, she gives me more responsibility. I feel like I have learned a lot over time.”

By doing research with their professors, students supplement class lectures with experiences in the lab. “I had the opportunity to experience what a scientist actually does, and I’m now in the process of applying to Ph.D. programs,” Duan said. “Through my experience working with Professor Williams, I have a good idea of the work I want to do in the future.”

Williams holds a B.S. from Duke University and a Ph.D. from the University of Washington. She first began studying arthropods as an undergraduate student. While pursuing her Ph.D. in biomechanics, Williams wrote her thesis dissertation on the mechanics of swimming in shrimp. During her research, she was interested in how these mechanics changed as the animals developed and added segments.

“Studying beetle segmentation seems very specific, but humans are segmented, too,” Williams said. “While we see segmentation more clearly in arthropods like beetles or shrimp, it turns out that a lot of the animals on Earth are segmented.” The prevalence of segmentation throughout the world makes it a popular area of study for scientists. “The basic design of a body plan made of repeated parts has proven to be a successful strategy for animals throughout evolution,” Williams said.

The National Science Foundation is an independent federal agency created by Congress in 1950 “to promote the progress of science; to advance the national health, prosperity, and welfare.”