Hartford, Connecticut, May 23, 2018—Excellence in faculty research and scholarship was on display at the 21st annual Shirley G. Wassong Memorial Lecture in European and American Art, Culture, and History at Trinity College on April 23. This year’s presenter, Cheryl Greenberg, Paul E. Raether Distinguished Professor of History, traced the political collaborations between black American and Jewish American organizations during the 20th century on issues of civil rights and civil liberties, as well as their tensions and struggles. Her research works to draw lessons from this narrative, determining what worked and what did not in this powerful coalition.

Johannes Evelein, professor of language and culture studies, chair of German studies, and co-director of the Trinity Institute for Interdisciplinary Studies (TIIS), introduced Greenberg by expressing her commitment to Trinity, her long-standing scholarship, and her capacity to enlighten even her fellow faculty members through her contributions to her field. Greenberg brought her unique perspective to what was both a historical exploration of engagement with the civil rights movement and a political primer for coalition building today. Greenberg’s work underscores the richness of an interdisciplinary approach to complex historical topics and the breadth of study that is happening on Trinity’s campus. 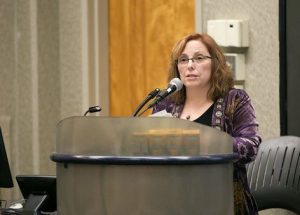 Greenberg began with the pronouncement that she would be “violating every rule in the historical profession by using the past in service of the present.” Throughout her presentation, she gave insight into the methods employed in black and Jewish communities as they sought to improve their circumstances in American society.

At key times in the 20th century, Greenberg explained, black and Jewish people moved forward together, spurred by a mutual self-interest that benefited from collaboration. While there was nothing special about both being minority groups, Greenberg argued, they did have some shared experiences to draw from while working together. At the turn of the 20th century, the coincidence of the Great Migration of African Americans to the North and the arrival of millions of Jews from Europe meant that American cities had new populations to consider. Both black and Jewish groups formed organizations to help meet their own needs in this landscape. Later, they would seek the support of one another, with the Jewish community reaching out for support during the crises in Europe, and black Americans seeking to make strides in civil rights following decades of oppression. For both groups, it was about “rearticulating their agenda in a more universalist way” to ensure they reached a broader audience in their organizing.

Greenberg emphasized the historical relevance of this activism in our current time—and the lessons to be learned from the obstacles along the way. In postwar America, “coalition building between blacks and Jews was spurred and shaped by new liberalism.” While this liberalism fueled a generation of organizing, by the mid-’60s, liberalism seemed to fail civil rights. In spite of greater desegregation, black Americans were still relegated to lower social and economic status than their white counterparts. As Jewish Americans could operate in America as white, they did not take these economic and class disparities into account. As a result, “Jews fundamentally misunderstood the frustration of black activists,” leading to a widening fissure between the communities. As Greenberg explained, “Theoretical liberal race blindness was not enough,” and they failed to recognize the structural limitations faced by black Americans. As these factors came to a head, Greenberg reminded the audience that when advocating for change, “Positionality matters … positionality really matters.”

Greenberg asserted that contemporary activists can look to the past to understand how to collaborate to support mutual interests. “We must work to dismantle those invisible barriers—changing individual hearts and minds is not enough … discussion is not enough,” she said. This resounds in an age of new protests, causes, and challenges to connect seemingly disparate communities.

The lecture was preceded by the annual dinner and reception, attended by students, staff, faculty, alumni, and members of the public. The Shirley G. Wassong Memorial Lecture was established in 1996 in loving memory of Mrs. Wassong with the support of friends, family, and her husband, Joseph Wassong ’59. Since 2010, the Trinity Institute for Interdisciplinary Studies has been honored to organize this annual event.