Laura Cadavid ’19, Claire Pritchard ’20, and Gwen Sadie ’21 are three crew members who go above and beyond in their roles as student workers in the Austin Arts Center (AAC). Put your show face on and get to know these three Bants and their experiences being a part of the #TrinArts community!

What are you studying at Trin, and what involvement did you have in the most recent production of “Little Shop of Horrors”?

CADAVID: I am a neuroscience major, and although I am not working the “Little Shop” musical, I am helping to build the set.
PRITCHARD: I am a biochemistry and theater major, and I am a costuming assistant for AAC.
SADIE: I am double majoring in music and sociology, and I am part of AAC’s front of house staff, which includes working the Box Office and ushering for shows and musicals like “Little Shop.”

Tell us a little bit about what the most recent musical, “Little Shop of Horrors” is about—for those who might have missed the production.

PRITCHARD: “Little Shop of Horrors” is a story of ambition, love, and tragedy, but in a fun way! An employee, Seymour, at a struggling flower shop on Skid Row discovers a new plant that brings attention and customers to the shop, but also has a price, as Seymour has to compromise his morals for his newfound fame.

Would you say there is a strong theater community at Trin? Do you have any advice for Bants that are interested in joining the community or working with AAC?

PRITCHARD: The theater community at Trin has been one of the defining factors of my experience here. I love being involved with productions through acting and through working backstage in costuming. I think the theater major community is tight-knit, and I’ve met some of my best friends in the department. AAC productions welcome students of all majors, so I’ve also been able to meet and get to know people I never would’ve met just in my classes. If you’re interested in theater at Trinity, I say just dive in! The classes are really accessible to people of all skill levels, and they’re really rewarding. And, the productions are a lot of fun no matter how much experience you may or may not have.

What else are you involved in on campus?

CADAVID: I am a member of the neuroscience club and the president of Nu Rho Psi, the Neuroscience National Honor Society.
PRITCHARD: I am a supplemental instructor for biology 183 and a chemistry TA (teacher’s assistant). I also teach Trin Recreation Trin-Cycle classes, I’m a Cinestudio coordinator, and I am an intern with Planned Parenthood of Southern New England.
SADIE: I am a member of the Trinity College Chapel Singers, The Trinity Pipes, Gospel Choir, Cleo of Alpha Chi, Trinity Film Festival, and I am a Cinestudio volunteer.

When did you decide to get involved in the theater scene at Trinity, and what sparked your interest?

CADAVID: I actually only became involved in the theater scene last spring when I started working as a stage technician. I wanted to find a job on campus that was very hands-on and where I could learn a lot. I have always wanted to work in a theater since high school, but I never got a chance to do it and figured this would be the perfect chance.
PRITCHARD: I got involved with Trinity theater as soon as I got here freshman year when I was in “The Laramie Project.” I did theater all throughout grade school, and I knew I wanted to pursue it in college, so it was a no-brainer for me.
SADIE: I started working in Austin Arts my freshman fall, so for the past two years my involvement in the theater scene has primarily been as a promoter and usher. As a front of house employee, I get the inside scoop on all our upcoming performances and then I work the shows. In that sense, I don’t really miss any AAC performances, which is one of my favorite things about the job.

What do you like most about working in your current AAC position?

CADAVID: I think when I first started the job, I really liked that it was very hands-on, and I got to learn so much about carpentry, electrics, painting, etc. As I spent more time in shop, I showed an interest in learning new things, and I was always willing to ask for help (or provide it when I could), which is why I think my supervisors made the decision to make me a project lead.
PRITCHARD: I love the diversity of roles you play as a costuming assistant, from sewing to makeup application, to calming performers’ nerves and helping them with quick changes. Costuming assistants have an opportunity to make a big difference in the show by making sure that the cast can focus on performing.

SADIE: I love seeing people coming and going from AAC. It’s nice to see many of the same faces during my weekly shifts, but there are always new faces as well. Also, when you work in the Box Office, you get to pick the music, which is very important. Coming in as a freshman, I knew I wanted to get involved in music both academically and through extracurriculars so when I found out there were job openings at Austin Arts Center, I jumped at the opportunity. I knew that working in AAC would help me establish and maintain relationships with more of the faculty and staff who work in the building. Now that I’ve been working here for the past two years, I’m really grateful for those relationships.

What is your fondest memory or greatest accomplishment so far during AAC’s most recent production?

CADAVID: When we started building the set it looked kind of clean, and then as we worked more on it, especially the painting it started to look more like an old, dirty store which I was pretty proud of.

PRITCHARD: Two of the costuming assistants are taking night classes this semester, so we’ve had to work around them being gone and still be able to do everyone’s makeup and hair, and so far we’ve been able to do it!
SADIE: I put a group of twelve students on the wait list for a Thursday performance, which hardly ever happens, so that was pretty exciting! It’s always fun to get to the point of selling out all or most of our shows because there is a sense of anticipation and excitement in the air that everyone feels together.

How do you work within your team to achieve your goals on a regular basis?

SADIE: When everyone does their part to the fullest of their abilities, no matter how big or how small it may seem, whether it is on or behind the stage, things tend to go extremely smoothly. We are all working towards a common goal; having a sense of community and knowing that we are all here to help and support each other is a key part of what makes the job so enjoyable and successful.

Do you hope to continue work at AAC in the future—even after your time at Trin?

CADAVID: I would love to continue working at a theater somehow, maybe this summer, however, since I am not a theater major, this may not be the route I pursue. I have definitely learned a lot of skills that I will use in the future when it comes to any kind of handy work (shout out to Elisa, Ritz, and Jessie for all of their help).

PRITCHARD: I plan to work at the costume shop until I graduate, and I would love to stay involved in theater after Trinity.
SADIE: Yes, definitely!

How have you grown as a production crew member?

CADAVID: Every time we build a new set, we do something new or different, so I get to learn something from each one. “Little Shop” specifically, taught me a lot about set design and adding wear and tear on purpose which was really cool.

Do you find it is hard to juggle your academic work along with your positions on the crew? How do you balance your social and work lives?

SADIE: Don’t sleep. Kidding, of course! In all seriousness, it is all about staying on top of my work and finding a good, healthy social dynamic that enhances my quality of life rather than stresses me out. When I surround myself with people who support me, and when I choose to study things that genuinely interest me, that balance works itself out. I find that my social life in many ways meshes well with my academic, extracurricular, and work related interests, which softens the distinction between “work” and “play” and helps me have a fulfilling day to day life.

If you could choose a show for AAC to do in the future, what would it be? 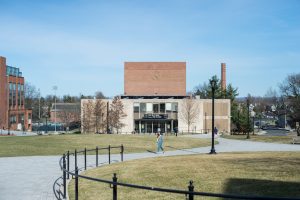 Is there anything else you would like to say or advice for other Bants looking to get involved in #TrinArts?

CADAVID: I have learned so much and have met a lot of awesome people at AAC, we’re so lucky to have such great people running things around here!

If you’re interested in getting involved as a student worker in the AAC for future semesters, reach out to Alexandra Fischbein, Administrative Assistant for Academic Arts and Production at Trin, via email: alexandra.fischbein@trincoll.edu