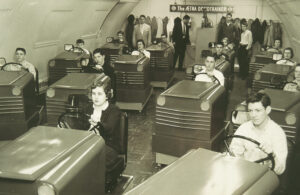 Trinity Library is excited to  partner with JStor and a select few institutions in an  initiative for sharing local digitized collections. The new JStor Open Community Collections platform now hosts a growing number of Trinity College digitized image and text collections sourced from Trinity College Archives and Libraries.  Totaling over 20,000 items and spanning more than a century, it includes Ivy yearbooks, Tripod newspapers, archival photos, postcards, playbills, prints, manuscripts, and more. The collections which are public may be accessed directly on our Trinity College portal in JStor, but Trinity users may choose to authenticate for access also to other JStor content. Searches of our collections can be conducted from the Trinity portal or from the JStor database, with search capabilities to expand in future. 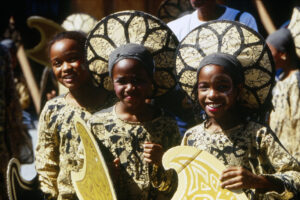 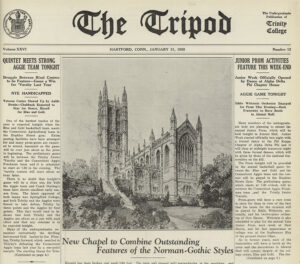 All pay-per-view access to unsubscribed content from Elsevier’s ScienceDirect has been discontinued.  All requests, including our Elsevier print holdings, will be filled via regular ILL.

In July the Trinity Library switched from an instant access model to a mediated access model for the Kanopy Film Streaming Library.  While the immediate access to films in Kanopy was very appealing, rapid increases in use and associated costs made the service financially unsustainable for the library. Trinity is not alone in this: other institutions who are going to a mediated or very restricted access include Stanford, the University of Michigan and many others.

Kanopy’s pay-when-viewed model charges the library an annual licensing fee when a certain percentage of the film has been viewed or the film has been viewed three times.  The mediated access model gives viewers the option to request access to films that that library has not purchased a streaming license for in the last twelve months.  These requests are sent to the librarians for evaluation, who will look for the most cost-effective way to provide the film.  In most cases when a request is made during normal business hours it will be processed within 24 hours.

Because of costs the library will only authorize use of Kanopy films for academic use.  For any other film requests we will do our best to direct the interested user to an alternate viewing method.  We encourage you to browse the media collections of the Trinity, Wesleyan, and Connecticut College libraries.

What does this mean for you?

If you have any questions about these changes please contact Kim Rinaldo (kimberly.rinaldo@trincoll.edu) or Katie Bauer (kathleen.bauer@trincoll.edu)

Late in the fiscal year, the Library reviews ‘wish list’ requests, and makes decisions based on available funds, relevance to student assignments, and faculty teaching & research.  A one-time purchase is preferred, even though it may require an annual service fee.

For questions or comments about e-resources or journal subscriptions, please contact Jennifer van Sickle at Jennifer.vansickle@trincoll.edu

1885 map of Rockville, CT, from the Sanborn map collection

The influx of dissenting ideals forming in the American populace in the 60’s is best exemplified by the emergence of a wave of alternative press.  Published by feminist groups, anti-war activists, Black Power advocates, campus radicals, and members of the LGBT communities, among many others, these newspapers, magazines, and journals focused on spreading the tenants of these radical new ideas.  From 2013 to 2017 Reveal Digital made it a goal to digitize a large number of these alternative press publications and make them available in an open access format as a part of their Independent Voices collection.  To complete this goal Reveal Digital partnered with libraries that held copies of these publications as a part of their collection and with 107 other academic libraries that provided financial support.  The Trinity Library is proud to be a supporter of Independent Voices and we are even more excited to report that the digitization of publications has been completed and the collection is now available online!

Independent Voices is the largest digital collection of alternative press publications; containing over 1000 publications divided by subject into seven series.  Included in this are the five original Underground Press Syndicate titles, East Village Other, Los Angeles Free Press, Berkeley Barb, The Paper, and Fifth Estate.  Follow the links below to view a list of publications included in each series.

Don’t wait to take advantage of this fantastic historical resource!  You can search or browse the collection today by visiting the Independent Voices Archive.

We are excited to announce that we now have a site license to The Chronicle of Higher Education. There are no limits on the number of simultaneous users, no special logins, and no more need to use the ProQuest archive or wait for the print version.

If you’re on campus, you can go directly to www.chronicle.com; if you’re off campus, our proxied link has you covered!

We’ve arranged trials of two databases. We’d like to hear your opinion:

Please try these databases and let us know if you think the library should consider a purchase by sending email to kbauer@trincoll.edu.

As was announced in our Information Services Fall 2015 Update, we are changing our authentication method for library e-resources to eliminate the need for our off campus users to download a VPN client.  This initiative takes advantage of Trinity’s new Shibboleth authentication server, a product called EZProxy, and a rewrite of our local web links to provide a smoother transition from our library discovery systems to the e-resource.

The most noticeable change is that many of our web links now have “ezproxy.trincoll.edu” in their address.  The first time you click on one of these resources you will be asked to login to the College’s new Shibboleth authentication server and then passed onto the resource.    If you allow your web browser to store cookies, you will only need to login once per session.

Further details are at http://www.trincoll.edu/LITC/Library/servicesinfo/spacestech/Pages/network.aspx

The Library has two systems updates scheduled between January 7-9th that may affect user access:

The Library catalog will be down Wednesday January 7th, but should be back up by mid-day Thursday, January 8th.

ILLiad interlibrary loan access will be down Thursday January 8th, but should be fully restored by the afternoon of Friday, January 9th.

The Library is expanding its access to online videos with over 2,000 feature and educational films from major producers including California Newsreel, Criterion Collection, Green Planet Films, Kino Lorber, and others.

The service is provided by Kanopy Streaming, a company specialized in bringing digitized films to colleges and universities.  To explore what the Library now makes available with this new service, please go to:   http://trincoll.kanopystreaming.com.  Records for titles in Kanopy have also been added to the Library’s catalog, with direct access to the video.