Skip to content
The word mammon represents wealth, money and material which are contradictory to the reasons rap was started. However, it is important to consider when looking at some of the paths many rap artists have taken in recent years. Entertainment media has made fame and materialism the beacon by which their companies and artists thrive and make money. In the new testament of the Bible, there is a line that says, “You cannot serve God and Mammon.”  I see this as analogous to the original passion and purity of principles that rap was founded upon as compared to where it is now.
The left side of my graffiti collage holds symbols of unity and peace, along with DJ Kool Herc and NWA, two artists that have stood out to me and who have impacted the art of rap. I drew a street sign of the Cross Bronx Expressway representing the hardships the Bronx (the birthplace of hip-hop) went through. Along with this, I implemented the elements of which gangster artists have promoted…  a Hollywood star representing fame, a marijuana leaf, and whiskey bottle to represent substance, and various other symbols. I also chose to implement a police car siren representing police brutality, and three artists who have either changed their path to more of a political message or who have been known for their activism as rappers in recent. 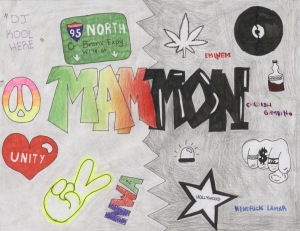