Enjoy Your Civil Liberties While You Kill My Father 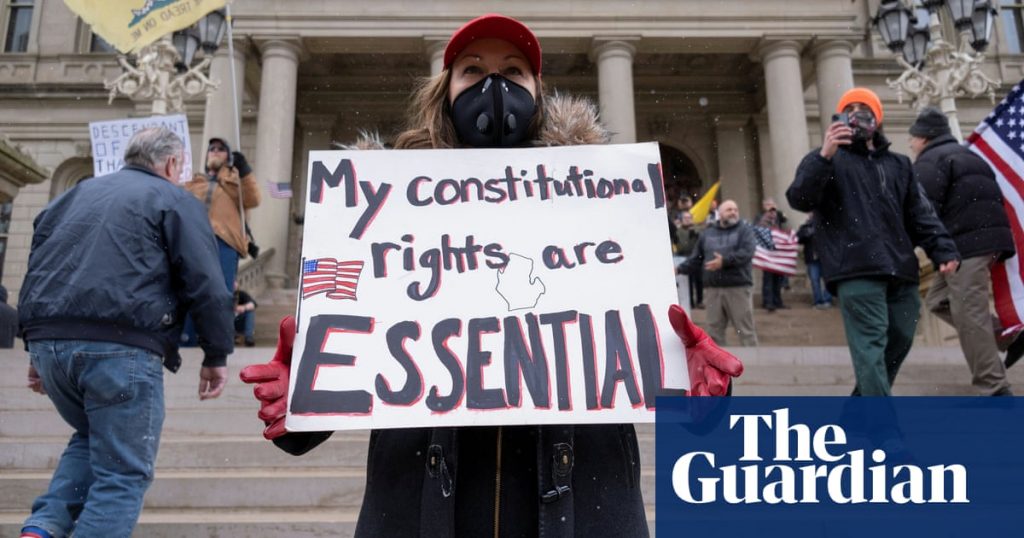 A woman wearing a face mask holds a placard as supporters of the Michigan Conservative Coalition protest against the state’s extended stay-at-home order. Photo courtesy of Seth Herald/Reuters.

Pandemics are not new to this nation. Since its founding, the United States has had its fair share of health emergency crises. This country has experienced the loss of billions of American citizens to illnesses like Smallpox (1633), the Spanish Flu (1918), SARS (2002), the Swine Flu, H1N1 (2009), and now, the new “novel” coronavirus or COVID-19. Although the idea of quarantine and shelter-in-place isn’t new either, the most powerful country in the world was not prepared for the pandemic we are facing today.

What went wrong? Who is to blame for the loss of so many lives? And why isn’t the federal government doing more to try to save the American people? Under the Commerce Clause, in matters of public health, the federal government has the right to prevent the spread of a disease. However, according to the Center for Disease Control and Prevention (CDC), state governments, not the federal governments, have most of the power to place people in isolation or quarantine under specific circumstances. It is important to note that in some cases, federal-state officials have overlapping roles: a national emergency is one of those cases.

Furthermore, under the Welfare Clause, Article I, Section VIII, Clause I of the U.S. Constitution, on issues of public health, the federal government has the power and the authority to act on behalf of the American people’s well-being. Unfortunately, Congress has been silent about its powers or how to proceed during the COVID-19 crisis we are facing. In addition, the current administration has not issued a nationwide quarantine or shelter in place order forcing many states to establish such policies to mitigate the spread of the coronavirus. Nevertheless, there are still several states that have not adopted these types of policies, and the government’s failure to impose their power over those states will be catastrophic. The problem with states having most of the power is that some states have decided not to enforce closings, social distancing, quarantine, or shelter in place policies. Thus, how can a pandemic like the one we are experiencing ever be stopped without the coordination of the federal government? While I understand that a nationwide lockdown might not be necessary, a statewide federal quarantine and isolation recommendation or executive order could save thousands, if not millions of lives.

In a country like the United States, the idea of social distancing or sheltering-in-place is not possible for many citizens. Many workers are considered essential; some must work to survive, some are homeless, some lack paid family or sick days, and some feel that the state’s recommendation to shelter in place is a threat to their civil liberties. The latter one is one I cannot sympathize with, and it is hard to comprehend. The reason? My elderly father, a 78-year-old man with a severe heart condition who could potentially die if exposed to COVID-19 thanks to an irresponsible person who wants to enjoy his “civil liberties.” If it is true that we, as Americans, have rights, we also have responsibilities. During a national epidemic crisis, one of those responsibilities is to use the honor system and do whatever we can to help the most vulnerable. In the absence of strong federal government actions during a health crisis emergency, we must exercise these responsibilities. If on the contrary, you decide to exercise your civil liberties right, whether you are ill or not, you might – without knowing it – be killing my father, along with several hundred more Americans.

While a federal mandate might not entirely stop people from gathering with family and friends or wandering the isles of a Walmart, perhaps a cautionary word about social distancing from the federal government might encourage citizens to follow the honor system and help save the lives of those we love. The life you help save could perhaps be one of your loved ones.

A national health emergency such as this one should not be considered merely a state issue, and a federal response federal is required. This crisis is one where we need a strong leader providing guidance and encouragement, sadly, this is not the case. In the absence of a competent leader, it is up to us, to each one of us, to take the lead, to help our neighbors, and to lift each other up. Without a capable government, it is our duty and our responsibility to take charge and do whatever we can to stop this virus.

Please practice self-distancing, stay safe and healthy, and please, please, do not kill my father just because you want to enjoy your “civil liberties.”

This entry was posted in "Why Declare PBPL?", Current Events, Policy Voice Contributors. Bookmark the permalink.