Kirkpatrick has taught at Trinity since 1969, five years after he earned a B.A. in religion from the College. He holds a master’s degree in comparative religion from Columbia University and Union Theological Seminary and a Ph.D. in religious studies from Brown University. Kirkpatrick specializes in three areas: the philosophy of religion, Christian social ethics, and the history of Christian thought in the West. In the classroom, Kirkpatrick sought to engage students in the ongoing conversations about religious and philosophical ideas that have influenced western civilization. He exposed his students to the original writings of major religious thinkers, having them discuss and debate the conflicts inherent in those ideas and helping them to come to their own understandings and creative responses. Kirkpatrick served as interim dean of the faculty from 2004 to 2006, received the Dana Research Professorship for 1993-1995, and was given the Brownell Prize for Teaching Excellence in 2011. 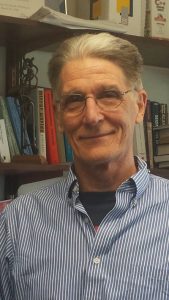 Morelli came to Trinity in 1985, the same year the computer science major was established. Over the years, he has taught many of the courses in the major and has done research in areas such as expert systems, artificial intelligence, and historical cryptography. Recently, Morelli’s teaching and research has focused on mobile computing. In summer 2011, he led a team of Trinity students that developed a mobile application for a food security organization in Haiti as part of the Humanitarian Free and Open Source Software (HFOSS) project. For the past several years, Morelli has served as the principal investigator of the Mobile Computer Science Principles project, a National Science Foundation-funded initiative to help broaden access to computing among underrepresented groups, including girls, African Americans, and Hispanic Americans. The Mobile CSP project provides both a professional development course for U.S. high school teachers and an Advanced Placement course that introduces high school students to computer science by engaging them in building mobile apps that serve their communities. In fall 2015, Morelli taught “Mobile Computing with App Inventor,” one of Trinity’s first MOOCs (massive open online courses) on the edX platform.