Which course has been your favorite? Why? My sophomore fall I took an upper-level philosophy course on Adorno with Professor Vogt. It introduced me to an entirely different way of thinking about the world and the interconnections between aesthetics, politics, and more. Ultimately, it was this class that convinced me to major in philosophy.

Which professor has influenced you the most? Why? Professor Vogt in the Philosophy Department and Professor Cruz-Uribe in the Math Department have contributed the most to my intellectual development. Professor Vogt’s courses are always very challenging — in the material, but also in the way he pushes his students to really engage with it and think both to understand the texts and to critically evaluate them. I did research with Professor Cruz-Uribe starting my freshman fall, and the exposure I got to mathematics from this experience fundamentally changed the way I thought about the discipline, the way it is used in the world, and the way it develops. These two professors ultimately shaped what I chose to study and how I went about studying it.

What is the most important thing you have learned at Trinity? To consider a text with an open mind. It is really easy to read a text at a cursory level, come up with enough evidence to disprove to yourself what you think the author is saying, and then disregard it. To really learn — especially in literature and philosophy — you need to commit yourself to a charitable interpretation of the text, to do your absolute best to put the text together in such a way that it is strong and coherent, even if you do not like what it is saying. 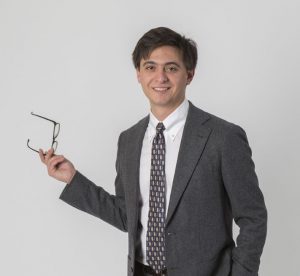 What has been most important to you outside of class? My involvement in the Fred Pfeil Community Project has been my most important experience outside of class. It is a really nice place to live: people always say hello — sometimes we get e-mails saying there are leftover cookies and to help yourself. Generally people leave their doors open so that others will come in and hang out. It’s like living in a small town where you know your neighbors. The events on Friday nights and multiplicity of groups (with focuses such as board games, rom coms, and poetry) are a plus.

Where do you hope to be in 10 years? I’m unsure — but, at the very least, to be making a difference in the world.