Is that growing crack along the basement wall the result of water damage or the start of something much, much worse? 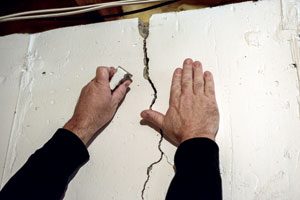 For the past several years, homeowners across northeastern Connecticut have been caught up in the unfolding crisis of concrete foundations crumbling to pieces, causing homes with the telltale maplike cracking patterns on their basement walls to slowly collapse. The culprit is concrete with high concentrations of the mineral pyrrhotite [PEER-row-tight], which has proven difficult to detect in concrete core samples.

According to Tim Heim, founder of the grassroots organization Connecticut Coalition against Crumbling Basements (CCACB), “Up to 33,000 homes could have the problem. We’ve got to test these homes and find out what the scope of the problem is.” There is no way to repair the crumbling concrete; the only remedy is to replace the entire foundation, which could cost more than the home is worth and often is not covered by insurance.

Working with the CCACB, faculty members in Trinity College’s Environmental Science Program have developed more affordable and definitive tests for pyrrhotite to benefit homeowners whose foundations are showing signs of deterioration or those whose homes may be at risk. 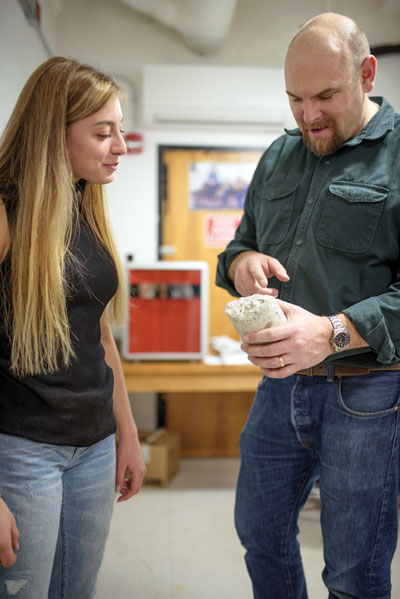 Jonathan Gourley, senior lecturer and laboratory coordinator in the Environmental Science Program, lives in the small town of Bolton, Connecticut, which is among those with houses that have crumbling foundations. After friends and neighbors who knew of his expertise in geology asked him about his knowledge of testing for the notorious pyrrhotite, Gourley took the question to his colleague, Professor of Environmental Science and Physics Christoph Geiss, who conducts research in geophysics.

“It’s really hard to test for pyrrhotite in concrete with regular geological methods,” says Geiss, who also serves as director of Trinity’s Environmental Science Program. “In the concrete, there’s maybe a half a percent of pyrrhotite, so you’re looking for a needle in a haystack.”

But then came the lightbulb moment or, rather, the magnet moment.

“Pyrrhotite is magnetic,” Geiss says. Gourley and Geiss decided to test concrete samples that they knew contained pyrrhotite and samples that did not, as well as to compare the magnetic measurements of the samples at different temperatures. Geiss explains that a normal concrete sample becomes nonmagnetic at 580 degrees, but pyrrhotite becomes nonmagnetic at 325 degrees, producing a specific result that can be used to recognize the mineral’s presence. “The application is new,” Geiss notes, “but the technique is not.” The result, Gourley says, is that “we have created a test that is more reliable for homeowners, and we can do it at a lower cost than what engineers were charging.” 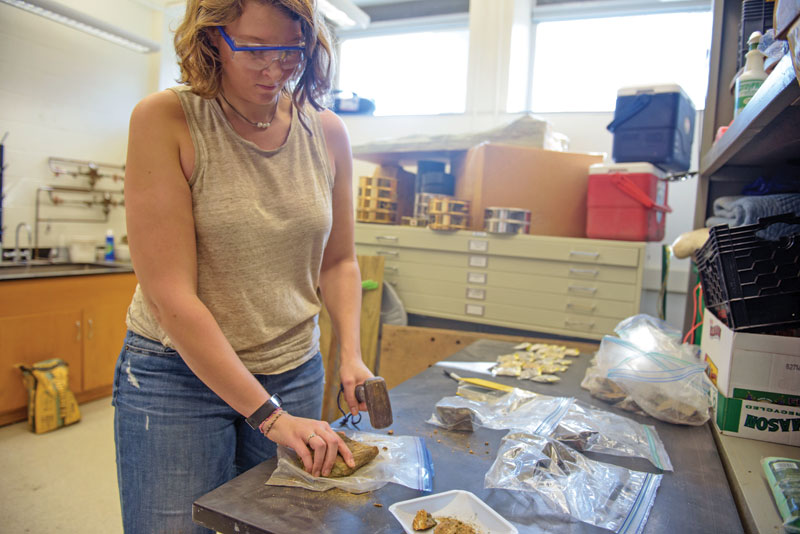 With homeowners facing so many challenges and costs, Heim says he is grateful to the Trinity scientists for developing this less expensive method of testing for pyrrhotite. Through the Capitol Region Council of Governments (CRCOG)—a federation of towns in the Hartford region—homeowners can be reimbursed for 50 percent of the testing costs up to $2,000, Heim says. “With the CCACB and Trinity in their partnership doing coring samples and testing, the cost will be $1,900, which is below that maximum,” he says. “Before this, the testing could cost $3,000 or $4,000.”

Gourley says that another tool used in their analysis looks at the amount of sulfur in a sample. “Pyrrhotite is not only magnetic, it’s an iron sulfide, so it contains iron and sulfur,” he says.

Geiss notes that it’s the sulfur that does the chemical damage in the sample. “Because the sulfur turns into sulfate and the sulfate makes all sorts of minerals that expand and are a little bit bigger than the original ones, it breaks the concrete apart from the inside out,” he says. This is called “internal sulfate attack,” or ISA, and it’s what creates the signature maplike cracking pattern in the concrete. 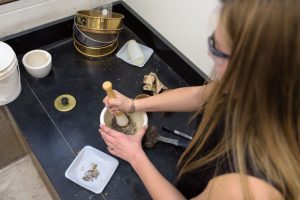 Sam March ’21 crushes concrete to ready it for testing.

Homes currently showing signs of ISA are largely concentrated in northeastern Connecticut around a quarry in the town of Willington where the pyrrhotite-rich pieces of rocks used in the concrete mixture originated. Heim says homes built from the early 1980s up to last year could be impacted and notes that homeowners would want their foundations tested for pyrrhotite for many reasons. If the concrete is already showing signs of cracking, a positive result can make the homeowner eligible for grants funded by the state government. Concrete with pyrrhotite could take years to show signs of cracking, so a negative result can bring peace of mind to homeowners and reassurance about the longevity of the foundation to banks, real estate agents, home inspectors, and insurance companies.

“My house was built in the early 1990s, and I am a victim,” Heim says. “My basement walls get worse every single day. The homeowners here did nothing wrong to cause this, and when you’re told that everything you’ve worked for is now worthless, it’s devastating.”

The CCACB manages the collection of the samples, and Trinity faculty and students complete the testing and provide written reports. “We involve our students in everything,” Gourley says. “They do fieldwork, collect samples, and contribute to the research.” 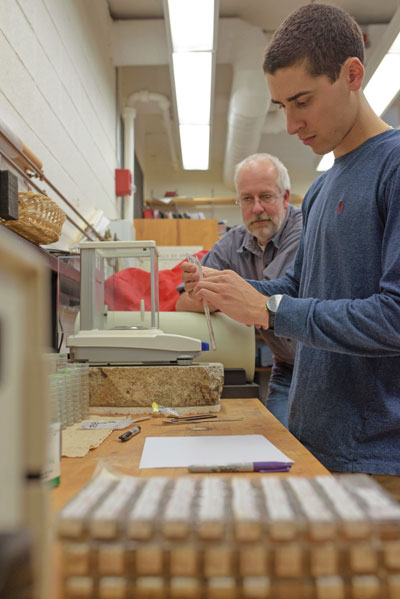 Professor of Environmental Science and Physics Christoph Geiss watches as Joe Ruggiero ’19 prepares a concrete sample for a magnetic measurement.

Joe Ruggiero ’19, an environmental science major and history minor from Manchester, Connecticut, has been working to determine the lowest concentration of pyrrhotite that will affect concrete. “Several of my neighbors have experienced extensive cracking, so I have seen the financial burden that this issue carries,” Ruggiero says. “I believe creating a cost-saving, comprehensive guide for homeowners will ultimately reduce the stress on families and lead to better legislation protecting homeowners.”

Sam March ’21, an environmental science major from Glastonbury, Connecticut, is gathering rock samples from across the state to test their pyrrhotite and sulfur concentrations. “This project motivates me because it’s applicable to the real world,” March says. “I believe that as this research progresses, we can begin to explain why basements are crumbling and eventually prevent this from happening in the future.”

Geiss and Gourley estimate that with the help from students, Trinity can process five to 10 concrete foundation core samples per week. Geiss says, “It’s a perfect combination of scholarship, teaching, and outreach to the community because we are providing a service that did not exist and that may help people quite significantly.” They hope to teach their methods to engineering firms and inspectors who will continue to run these tests.

The two attended a community forum in Ellington, Connecticut, last November when they told concerned homeowners about their testing methods and the new partnership between Trinity and CCACB. Heim says, “It’s been an honor working with Trinity and with Christoph and Jonathan. They have such passion in creating a more affordable means of testing so that the victims are not victimized again.”

Editor’s Note: Connecticut’s crumbling concrete foundation problem and the potential financial help for those affected continue to make headlines in the Hartford area. The number of homes involved, the funding available for homeowners, and other facets of the story may have changed by the time you read this.