Since you’re writing about Mr. Trinity [Jerry Hansen, in “Mr. Trinity Himself,” spring 2020], my father, John A. Mason ’34, also was known as Mr. Trinity. He was alumni secretary, and he coached two sports—golf and squash—and restarted Trinity crew with the help of Norton Downs.

He was beloved by numerous alumni over his many illustrious years at Trinity.

Editor’s Note: Thanks to Mr. Mason for writing about his father. Trinity College in the Twentieth Century by Peter Knapp ’65 notes: “In September 1960, John A. Mason ’34, formerly Associate Director of Development, became the College’s Alumni Secretary, and proceeded to develop the potential of that position through an emphasis on personal contact with hundreds of alumni, an effort that soon led to his informal designation as ‘Mr. Trinity.’ ”

Hansen ‘A Role Model For All’ 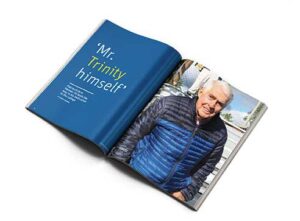 I have just now seen the tribute to Jerry Hansen in the spring 2020 issue of The Trinity Reporter (Yes! A year later.) The Reporter has done a great service in recognizing Jerry’s incomparable achievements and dedication to the college and its alumni. There are few who have done so much for so many. Most moving is his complete selflessness. Others, not Jerry, were always first in his hierarchy of values. He is a role model for all. The very best in knowing what makes life most worthwhile.

Bring Back Full ‘In Memory’

It was with great surprise that I found my hard copy of the spring Reporter without the obituary section but just a list of the deceased. For those of us who are older, that is one of the most important sections. Looking that up on the internet, which is very difficult for me and many older alums, is penny-wise and pound-foolish. Please return to printing the obituaries in hard print. Given you have 34 pages devoted to items not generally of interest to many older alums, certainly the few pages of death notices could be returned to the print edition.

For older alumni (I am Class of 1967), reading about classmates who are now deceased and whom we know, along with the Class Notes, is what we most need and connects us to Trinity. If there is a future constraint, it is the feeling of people that I know that priority should be given to respectfully include those sections.

Editor’s Note: Your point is well-taken, and we’ll aim to keep obituaries in print. Please see the full section of obituaries—“In Memory”