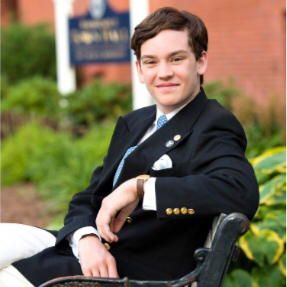 Brendan W. Clark ’21 was Editor-in-Chief of The Policy Voice from 2017 to 2021 while at Trinity and graduated with honors in May 2021. Brendan is now continuing his education at law school in the coming year. Brendan was a Public Policy & Law and History major from West Barnstable, Massachusetts. Within the department, Brendan’s focus was on Law and Society, but he was also interested in financial law, municipal law and property law. Brendan is currently a Law Clerk at Rose Kallor, LLP, an employment defense and labor law firm in Hartford, Connecticut, and was previously an intern at the Office of Connecticut Attorney General George Jepsen, working in the Antitrust and Government Program Fraud Department. Outside of academia, Brendan enjoyed reading literature on the history of law (his favorite being Blackstone’s Commentaries on the Laws of England) and watching his favorite film Casablanca.

Taylor Denson ’13: Taylor, a Public Policy and Law major and Medieval and Renaissance Studies minor from Indianapolis, Indiana, graduated from Trinity in the Spring of 2013.  In addition to working on The Policy Voice, Taylor was a Head Writing Associate in the Writing Center. He also wrote a senior honors thesis on Major League Baseball’s antitrust exemption and its effect on competition in today’s game.  Taylor has also served as a teaching assistant for Introduction to American Public Policy and has interned for State Representative Jason Rojas in the Connecticut General Assembly.

Matthew Picard ’14: Matt was a double-major in Public Policy & Law and Economics, and hails from Wayland, MA. He focused on health policy and economic policy analysis. Matt’s dream job is to work in an analytical Major League Baseball capacity, where he would finally be able to put the countless hours he spends scrutinizing the sport to actual use. Other common activities include running, playing softball and basketball, watching The Wire and Breaking Bad, and cherishing every bit of the Red Sox resurgence.

Suzy Wang ’13: Suzy was a double-major in Public Policy & Law and Economics from Brookline, MA.  She has a strong interest in education reform and hopes to do work in the field before pursuing a law degree. Other interests include rapping Nicki Minaj, watching West Wing marathons, and preserving her winning streak on Words with Friends.