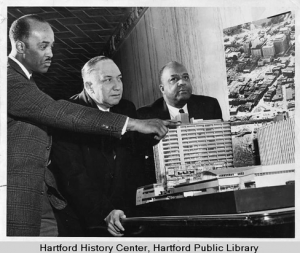 In 1955 the principal planner for the Hartford Redevelopment Agency applied to rent a two-room garden apartment from McKinley Park Homes in Hartford but was deceitfully informed that there were no more vacancies. This young man, Samuel J. Cullers, was African American and believed that he was being barred from the housing development on racial grounds by being “deceitfully” informed that there were no vacancies. Cullers filed—and won—a discrimination complaint against McKinley Park Homes but the Connecticut Supreme Court later overturned the ruling. The court declared that there was “insufficient evidence of bias” to prove that McKinley Park Homes discriminated against Cullers by failing to supply him with an apartment.

Samuel Cullers, who was born in Chicago, Illinois, graduated from Fisk University with a bachelor’s degree in sociology and economics in 1950. Right after graduation Cullers attended Massachusetts Institute of Technology as a John A. Whitney Fellow where he earned his masters degree in city planning in 1952. Shortly after, Cullers became the principal planner for the Hartford Redevelopment Agency as well as the City Plan Commission (“Samuel Cullers Appointed to Redevelopment Post.”). In 1955, when Cullers filed a racial discrimination complaint after applying to rent an apartment from McKinley Park, it appeared that this highly accomplished city planner could not secure the housing he desired solely because he was African American.

On March 12, 1956 a public hearing called by the State Commission on Civil Rights in the case of Cullers vs. McKinley Park Homes was held a the State Capitol at 10 a.m. Attorney Cyril Coleman represented McKinley Park in the dispute, while Assistant Attorney General Raymond J. Cannon represented the Commission. The Connecticut Civil Rights Commission appointed a three-member fact finding board to study and file briefs on the case. The case stated that Samuel J. Cullers, an African-American Hartford resident as well as chief planner in the Hartford Redevelopment Agency, filed a complaint that he was denied entry into McKinley Park Homes twice because of his race. These occasions took place in 1954, and April of 1955. The commission entered the case because McKinley Park was under “publicly assisted housing,” receiving a tax abatement from the city. With this 10-year tax moratorium on its buildings, the development paid only $350,000 when the total assessment of the property was set at $513, 471.  Because McKinley Homes had another year to run its abatement during the time of Cullers complaint, this apartment complex was still subject to anti-discrimination policy under the Public Accommodations Act (“McKinley Park Told to Give Negro Home.”).

During the time of Cullers complaint there were no African Americans residing in the McKinley Park Homes. Diane Shumsky, manager of the apartment complex, denied that African Americans were unwelcome as tenants to the apartments stating, “Anybody can live in these apartments as long as they qualify.” On further questioning Shumsky explained that these qualifications had to do with the prospective tenant’s credit rating. At the hearing Cannon presented evidence that McKinley Park submitted leases to two tenants shortly after Cullers was told there were no vacancies, which supported the claim of racial discrimination. Cullers visited the company on April 18, 1955 when a woman clerk told him there were no more applications available and later informed him that there were no apartments vacant, but on June 8 and June 20 of 1955 two tenants were admitted to McKinley Park Homes respectively. Although Cannon gave evidence that two tenants were admitted to McKinley Park after Cullers applied, Robert W. Gesecus, N.Y. president Presidential Management Corporation, which manages the McKinley development, said under cross-examination that there were no vacancies at the time of Cullers application. He also testified that personal interviews were necessary before applications were seriously considered. Although Cullers applied for an interview he did not receive a letter in return confirming his request, like other applicants had received. Gesecus claimed that he did not know why that was. When asked if the personal interview had something to do with determining the race of the applicant, Gesecus said it did not (“Hearing Ends in Case Charging Discrimination.”).

After the court ruled in favor of Cullers on June 19, McKinley Park homes appealed the board’s findings to the Connecticut Superior Court. Superior Judge John P. Cotter did agree that Cullers’ rent application was dealt with in a way that “creates a suspicion” but that the findings must be based on “substantial and competent evidence, not on a mere scintilla of evidence.” Judge Cotter points out that Culler sent his first application in 1954 by mail and made other contact through telephone. The fact that Cullers did not appear in person, Cotter argued, gives evidence that McKinley Park Homes was most likely unaware of his race. When Cullers did visit the company office on April 18, Judge Cotter said that from the evidence it seemed like Cullers was already “apprehensive and suspicious” that he was being barred on the basis of race when he entered the building. Furthermore, Cotter argued that based on the actions of the woman clerk, “we cannot infer an intent to discriminate against Cullers.” Based on this supposed rationale, Judge John P. Cotter overturned the Civil Rights Commission ordering McKinley Homes to rent an apartment to Samuel Cullers on the reasoning that there was insufficient evidence of bias (“Evidence of Bias Ruled Insufficient in Rent Case.”), even though there was a severe lack of evidence to prove that there was no racial intent behind denying Sam Culler from home in McKinley Park.

Cullers vs. McKinley Park Homes was not an exceptional case of racial housing discrimination, as there is much evidence of other instances of such practices that African Americans living in Hartford faced during the 1950s (“Where can a Negro Live?”). This case makes it evident that during this time affluent African Americans were confronted with housing discrimination, not just lower class African Americans. Furthermore, the case gives evidence that even after anti-discrimination laws were put in place, African Americans continued to be challenged with housing barriers. The two different rulings in on the Culler’s case exposes the difficulties of documenting and proving more subtle forms of racial bias at the time. This burden of proof can be seen as one reason why anti-discrimination laws alone did not eradicate unfair practices in housing.

How and why I revised my work:

In my revision of the CT History essay I fixed the opening paragraph by sharpening the assertion that Sam Culler was deceitfully informed there were no more vacancies. I also looked through the essay and made grammatical corrections as well as made sure that there was no repetition and that I stuck to the past tense throughout the entire piece. I further analyzed how I agree with the first ruling and found fault with the second ruling by adding that there was a lack of evidence as to how their was no racial intent behind denying Sam Culler a house in McKinley Park. Lastly, in the conclusion I added more information about the significance of the case by including the idea that maybe the burden of proof is a reason unfair practices continued even after anti-discrimination laws were put into place. The reasons behind many of these changes is to do a better job of convincing readers that the second ruling was unjust because previously it seemed as if the entry could have been concluded to readers that the verdict of the Supreme Court seems pretty reasonable.