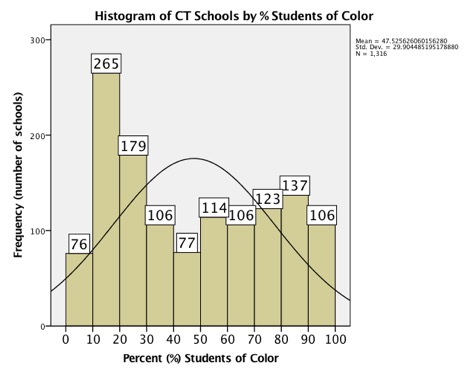 A common mistake is to think of racial segregation of schools and housing as a natural or normal condition. Over the last several years, renewed attention on racial segregation in housing and education largely as a result of State policy has tried to correct this mistaken idea.

In common language, we think of normal as the usual, typical, or expected. In our daily lives, the consequences of a system of racial classification might be so common that the process is barely noticed. Other times, the resulting conditions are hard to miss. Like in the case of racially segregated schools or neighborhoods, people might come to understand and/or accept these conditions as normal. Most importantly, racial segregation of schools is one method of hoarding resources on the one hand and reducing access to resources on the other.

Another way of looking at racial segregation of schools is to look at the distribution of schools’ racial composition. In statistics 101, they teach you that observations of a random variable tend towards a normal distribution for sample. This normal distribution has most data in the middle around mean (within two standard deviations) and two, symmetrical and extended tails on each side, or something like the curved line in the image above. In Connecticut, the distribution of children of color in public schools is not “normal” from a policy perspective, nor should it be seen as some random or naturally-occurring condition either.

From a policy perspective, State laws and policies that shape the housing market have concentrated people of color into certain towns and cities, thus their schools have higher proportions of students of color than the surrounding, and more exclusive, suburbs and schools. As the Cities, Suburbs, and School Project has explored and Dr. Sekou put in his blog last summer, “schools in racially and economically segregated communities were created by white flight, decades of FHA mortgage insurance requirements that utilized redlining, the use of racially restrictive covenants to prevent people of color from purchasing homes in white neighborhoods, exclusionary zoning practices that limit the availability of affordable housing in the suburbs, and the use or threat of violence to keep black or brown families brave enough to try to cross the color line out of white communities.”

These policies and the segregated conditions they produce are often seen as “natural” or “normal”. Sociologist Eduardo Bonilla-Silva explains in his book that thinking of segregation as normal or natural, for example, is one of the ways that racism persists without individual racist or bigoted acts. And if there are no individual acts of racism, but rather supposedly race-neutral policies, then claims can be made that racism no longer exists. If racism has vanished, as this logic goes, then the State and others can cite individual choice, preference, or merit as the cause of conditions like racial segregation rather than taking social responsibility and then seeking to remedy this condition.

In a statistical sense, we can also see this play out in terms of racial composition of schools. In Connecticut, the distribution of students of color in public schools is neither random, independent, natural, or some sort of “normal” condition  Instead, the distribution is not normal.

In Connecticut, children of color make up about 45% of all students in public schools combined. So we might expect most individual schools to be around that point of 45% if kids were evenly distributed by race.

But there is some other data that should make us look more closely.

The standard deviation for this group of schools (n=1,316) is almost 30 percentage points (of students of color in a school) above or below 48%. This is very large spread from that average (mean) of 48%, which suggests a wide variation in racial composition for this group of Connecticut schools.

In these two histogram charts (Chart 1: SPSS, Chart 2: Google Sheets), you can also see a strange pattern. Although you would expect most schools to be around that 48% mark, which is the average (mean), there is a dip in the number of schools in that range. And most schools are on either side of that point rather than clustered around it.

In this case, the distribution is positively skewed. In other words, there is a long tail to the right. Although most schools have below 43% children of color, there is something pulling up the average and this distribution to the right side of the chart.

The histogram charts illustrate what’s happening. There are a group of schools with much higher percentages of children of color in Connecticut that pull the average (mean) and the appearance of this chart to the right. These extreme values are from schools that are highly segregated, mostly Black and Latin@ schools and they skew the distribution. These schools can be considered moderately to highly segregated by race compared to the majority of schools in Connecticut.

For example, there are 106 schools between 90 and 100%, 137 schools between 80-90%, and 123 schools between 70 and 80% children of color. In terms of extremes, there are 241 schools with 80% or more students of color and there are 341 schools with 80% or more white students. That’s almost half of all schools (44%) in the State that have very high concentrations of either 8 out of 10 white or students of color in a school. If the distribution were random or independent, then you might see more schools bunched up together around a similar average in the middle of this chart, not so many schools on the extreme ends.

So what is a regular person supposed to make of this?

This is all just another way of showing that even though most schools in Connecticut have a slight majority of white students, there are a conspicuous number of schools that have a much higher concentration of children of color that distort the overall distribution. If this were some random, independent, or  “normal” condition, then we might expect to see a distribution of schools much closer to that curve line in the chart above, bunched around a mid-point with smaller symmetrical tails on both sides.

This skewed distribution of students by race in public schools is shaped by State and local laws in terms of housing and school assignment, so this isn’t just a random, natural occurrence.  This isn’t de-facto, but policy-based segregation. Racial segregation of schools is not normal.

Notes: In some cases, I had to estimate the white or student of color enrollment because the State suppresses counts of students at five or below. If you’re interested in learning the process, I might be interested in discusssing the method.