It was with apprehension that first-year student Mariam Avagyan attended the first class of Assistant Professor of Physics Brett Barwick’s Physics 141 “Physics I – Mechanics” course last fall. The high school physics class Avagyan had taken in her home country, Armenia, had consisted almost entirely of lectures. “I’d never done any physics laboratory work,” she says, “and I was feeling uncomfortable about it.” 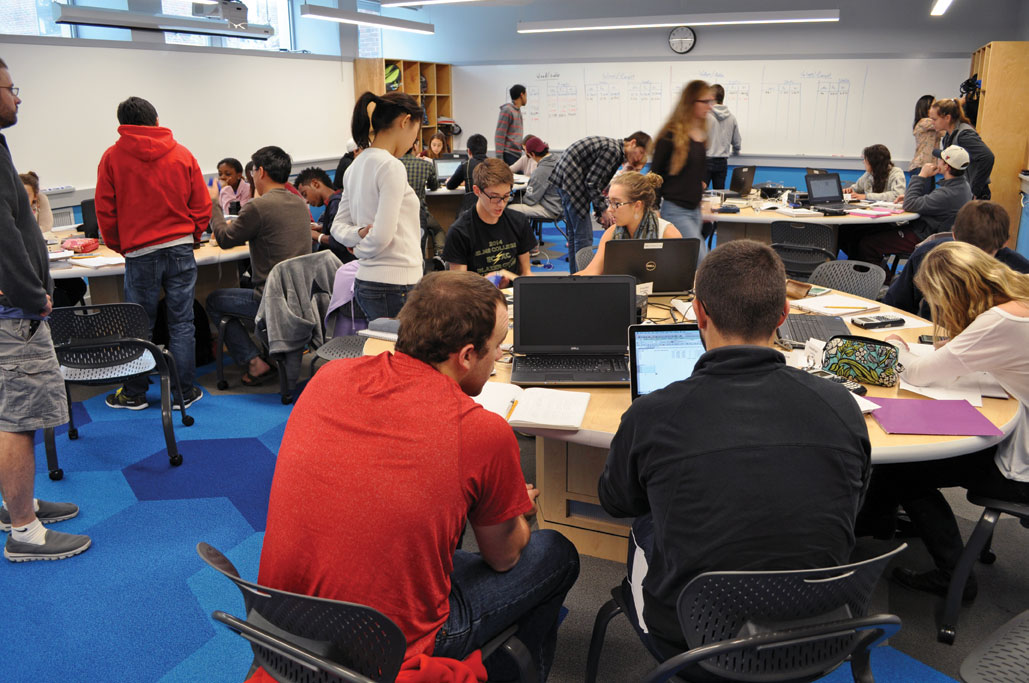 The introductory course is required for students who, like Avagyan, plan to take advanced physical science or engineering courses as upper-year students. So, most of the 30-plus students – all with an aptitude for STEM (sciences, technology, engineering, and mathematics) – trooped into the classroom in the McCook Academic Building  with a similar set of expectations. Traditionally, college introductory physics has been taught using a series of weekly lectures, in which fundamental ideas about physics were covered by a professor, and one weekly laboratory session during which students explored those ideas experimentally, collecting and analyzing data. Trinity was not an exception.

However, when Avagyan and her peers showed up for the first day of class last September, they found that paradigm had been tipped on its head. The course, a concentrated exploration of mechanics, had been completely redesigned.

As an undergraduate at Doane College, in Crete, Nebraska, in the late 1990s, Professor Barwick had experienced, firsthand, a novel approach to the subject that impressed him. “Doane had a new science building, and the professors were inspired to use a more active learning approach to teaching physics,” he recalls.

Barwick liked what he experienced at Doane and hoped to transplant those ideas when he joined the Trinity faculty in 2010. He soon found an eager ally in Associate Professor of Physics Barbara Walden. “It’s a goal of the department to attract more STEM students, who’ll choose physics as a major,” says Walden, a member of the Trinity faculty since 1991. “Revising the introductory course made sense. Research has shown this approach to teaching physics for first-year students produces positive results.” 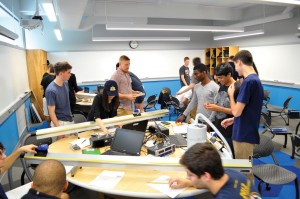 Indeed, there is a growing body of evidence. “Many studies over the past decade have demonstrated that hands-on learning is more effective than a traditional lecture-based approach,” says Walden, who taught a section of Physics 141 last fall. “Students find it more interesting and better understand the concepts when they are actively engaged in solving interesting, carefully designed problems and questions.”

The new course was patterned after a model called SCALE-UP, pioneered at North Carolina State University. SCALE-UP is an acronym for Student-Centered Active Learning Environment for Undergraduate Programs, and “active learning” is the key to its success. How it works is succinctly summarized in the introductory passage of the course overview students received on the first day of class: “The goal of the course is … to help you begin to think like a scientist – to understand how to solve complex problems, analyze data, design experimental ways to answer questions, and communicate scientific ideas.”

The class meets three times each week, for two-hour sessions, essentially the same overall amount of time as a traditional lab-lecture course. However, as the overview asserts, “There will be very little lecturing. Most of your time in class will be spent actively doing and thinking about physics – working in small groups to solve problems using theory, modeling, and experimentation. Laboratory work will be integrated directly into what we do each week. The course will be highly collaborative, hands-on, and interactive, and you will need to prepare well for each class session.”

Taking the revamped course from drawing board to physical reality did not happen overnight. For starters, it called for a completely redesigned classroom. Walden spent a year seeking funding for the renovation. During that time, she and Barwick consulted with professors at several other schools where similar programs have been offered. “Talking with others helped us to think through both the big picture and the small details,” she says. 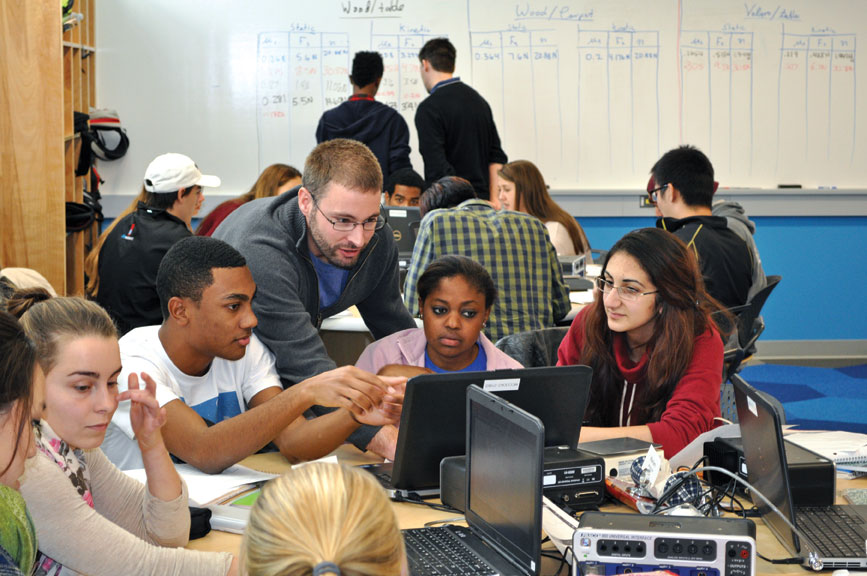 The new room, with its bright, colorful carpet, reflects that research. Instead of desks, it features commodious triangular tables supported by central pedestals. The tables’ rounded corners, and the fact that they have no legs, make it easy for three groups of three students to work together comfortably, designing experiments to help them answer questions and using computers to collect and analyze data. Moreover, since three groups work at each table, cross-pollination of ideas is encouraged.

Because students are often called upon to solve problems mathematically, the walls of the room are coated with “walltalkers,” a wallpaper that can be written upon and erased like a whiteboard. “Walltalkers fosters collaboration,” says Walden. “Three students standing at the wall, writing on a large surface where they can all see what is written, provides a very different dynamic than three students sitting at a table looking at a small sheet of paper upon which only one person can write at a time. I strongly feel that this is the most important piece of technology in the classroom.” The wall work also makes it easy for instructors and teaching assistants to scan ongoing class work, allowing them to observe and offer guidance.

Classes begin with brief lectures and discussion. Since students have daily reading assignments from a text, each class features a short quiz. The balance of the class is devoted to solving problems.

“We spent a lot of time designing the actual course,” says Barwick. “We looked for problems where students’ physics intuition was likely to be wrong. The learning opportunity lies in discovering why.”

Dean of the Faculty Thomas Mitzel said the new approach to the Physics 141 course reveals an appreciation from the faculty that students learn best by working on concepts in a physical manner, while simultaneously learning the theory behind the experimentation. “The hands-on approach to learning gives students power over their education by helping them run the required experiments that will give rise to the theory they will carry forward in their education. I applaud the work Professors Walden and Barwick have put into reconfiguring this important gateway course and will follow enthusiastically the assessment of their new pedagogical approach in the coming years.”

In addition to its most apparent benefits – that students learn physics more quickly and retain the subject matter longer – the redesigned course offers many advantages over the traditional approach to teaching physics, says Walden. For starters, it’s more enjoyable – for both students and professors.

“The classes would fly by,” says Avagyan, a Karl W. Hallden Engineering Scholar. “Solving the problems was a lot of fun, especially when you were working with two other students.” 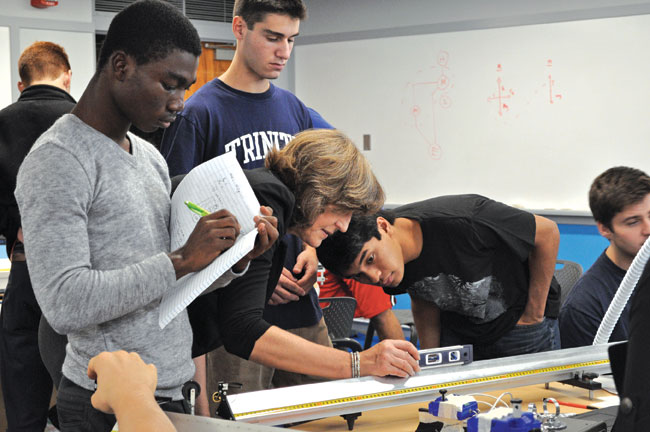 Walden and Barwick note that the success of the three-student teams hinged, in part, on their own work before the class designing the student teams to take advantage of student diversity and to bring together trios in which each student’s unique skills and experience complemented those of their partners. “Research has shown that the kinds of solutions students come up with in groups are often better than what the best students can come with on their own,” says Walden. “Collaboration is an important aspect of the course. In the real world, scientists seldom work alone. They are generally part of a team.”

Though he attended a high school that used a similar program to teach physics, Matt Lucas ’17, a Chicago native, came to Trinity expecting a traditional model. Like Avagyan, he found the course highly enjoyable. “I had a close friend who was in the class, but most of the students didn’t know each other,” says Lucas. “We quickly got to know each other and became friends. I think the social aspect of the class is part of its success.”

Beyond Education Scholar Paul Ntege ’18 concurs. “In my high school, in Uganda, physics was taught in a more traditional way,” he says. “This course was much more enjoyable. Solving problems helps students experience physics as something that explains the real world. I learned a lot and made many friendships.”

It’s too early to know how much better the new course, which is part of a two-semester program, is than the traditional approach, but early signs point to success. “In the past,” observes Walden, “a large number of students – perhaps 20 percent – would drop out after the first semester. That didn’t happen this year.”