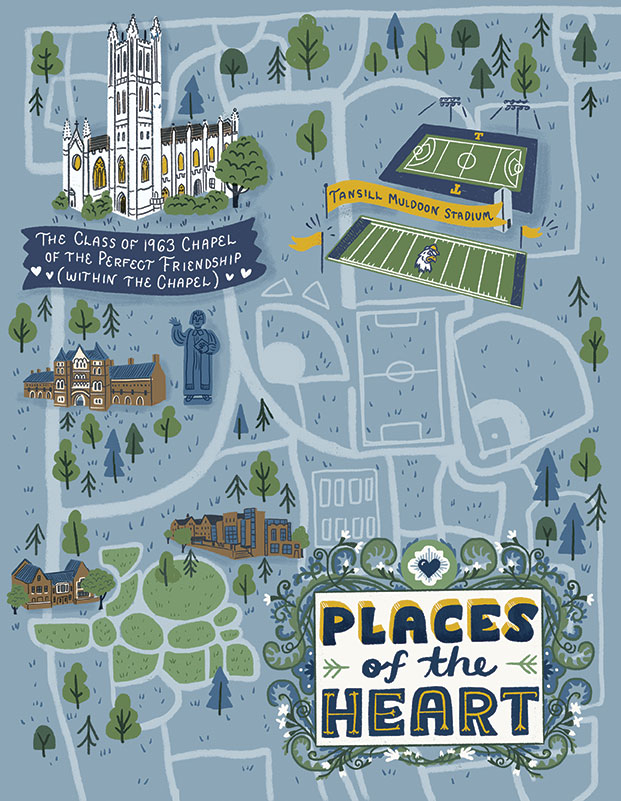 Many places on Trinity College’s historic campus hold special meaning for  alumni—places where lifelong learning was kindled and lifelong friendships were forged. At the same time, the challenge of maintaining and updating aging campus facilities is persistent and ongoing. Thanks to the generosity of Trinity alumni, families, and friends who have made recent significant gifts to the college, important progress is being accomplished toward upgrading athletic facilities and in initiating repairs and renovations at the Trinity College Chapel. Those who have contributed to these projects have honored and celebrated the Trinity experiences, people, and places they love. And all members of the campus community will surely benefit from the campus upgrades, described on the following pages, that these donors have made possible.

Tansill Muldoon Stadium: enhancing the game-day experience for all

For Trinity teams, coaching staff, and spectators, a major highlight of fall 2021 was the September 18 opening of the Tansill Muldoon Stadium, coinciding with both the season-opening football game and the NESCAC-opening field hockey contest. Serving more than 270 student-athletes from six teams, the new stadium complex sits between Jessee/Miller Field, home to the football and track and field teams, and Robin L. Sheppard Field, where the field hockey and lacrosse teams practice and play.

The Tansill Muldoon Stadium was funded entirely by philanthropy from Trinity alumni and families. Phase I of the project, which is complete, includes new spectator stands with ample and accessible seating, a new press box for Trinity coaching staff and members of the media, two rooms for alumni and parent gatherings, and a viewing deck with clear sightlines of both Jessee/Miller and Robin L. Sheppard Fields. Phase II, which will complete the project at Robin L. Sheppard Field, will provide warming rooms for Trinity athletes and visiting teams and a pavilion that will provide additional viewing areas for field hockey and women’s lacrosse games and an event/gathering space for athletes, coaches, and fans. This portion of the project is slated to be ready for fall 2022.

At the forefront of the successful fundraising effort were members of the Tansill and Muldoon families, including Trustee Emeritus Douglas T. Tansill ’61, P’91, ’96 and his wife, Dhuanne. Says Doug Tansill, a recipient of Trinity Athletics’ George Sheldon McCook Trophy for his outstanding contributions to the football, track and field, and basketball teams (including as 1960­–61 basketball captain), “Being a Trinity athlete has been extraordinarily important in my life, and I am pleased that we have this opportunity to give back.”

Tansill’s father, Frederic Tansill, Class of 1922, was captain of the football and basketball teams during his own Trinity career and later attended all of Doug’s football games.

Today, 40 percent of Trinity students compete as intercollegiate athletes (either varsity or club). “So it is a huge group of Trinity people who benefit from the opportunity to be a student-athlete and will benefit from these facilities,” says Doug Tansill. “Frankly, I think my participation in athletics and experiencing that commitment to being part of a team helped me get into graduate school [Harvard Business School] and ultimately to have some success in the business world.”

Representing a third generation of Tansill family alumni, Peyton Tansill Muldoon ’91 joined her father for the stadium ribbon-cutting ceremony, as did her husband, Arthur “Art” F. Muldoon ’88. Tansill Muldoon, who played on Trinity’s women’s soccer and lacrosse teams, says, “Sports are such an integral part of any educational experience, and I want them to remain strong at Trinity.”

Muldoon, a former captain of Bantam freshman and varsity rowing teams, says, “We were really excited about this as it came together. In addition to supporting the college and our belief in the positive impact of a liberal arts education, we believe in the importance of opportunities to participate in collegiate athletics. We also were honored to support the legacy of Peyton’s dad and the Tansill family, who’ve been so involved in the college for so many years.”

Additional Tansill family alumni athletes include Luke Tansill ’96 (Doug’s son and Peyton’s brother) and Luke’s wife, Sally Tansill ’98. Luke played one year of football and four years of lacrosse and served as co-captain of the lacrosse team senior year and was a first team all-league selection. Sally was a member of the women’s squash team.

Several other alumni families, current parents, and two groups of former teammates contributed significant gifts to the project. One of two named alumni suites in the stadium complex was made possible by members of the 1993 undefeated football team, who wished to honor their legendary coach, Don Miller. A second alumni suite is named for Class of 1987 football team members, as several donors from that class wished to celebrate their memorable gridiron experiences in this enduring way.

Completion of the Tansill Muldoon Stadium meets a key objective of Trinity’s ambitious athletics fundraising campaign, which aims to raise $65 million by the college’s bicentennial in 2023. To learn more about how to help, please see below.

Renaming the Chapel of the Perfect Friendship: a perfect way to honor the Class of 1963

“It’s an interesting thing about the Chapel,” observes Scott Reynolds ’63, P’92, H’11. “People love the Trinity College Chapel for many different reasons. For some, it is the music. Of course there are people who love it for spiritual reasons. There are those for whom it’s a beautiful piece of architecture and an iconic building.” Yet another reason, notes Reynolds, might be community-minded chaplains over the years “who turned the whole Chapel outward facing. They made the Chapel a living part of campus life and a very important force, no longer inward looking.”

Several members of the Class of 1963 will tell you that at least one, if not many, of those reasons inspired in them an abiding endearment for the Chapel. Also, inside the Chapel is a gathering space known as the Chapel of the Perfect Friendship, a place where Class of 1963 alumni have met many times before. That Chapel-within-the-Chapel seemed the perfect meeting space when classmates got together over Homecoming Weekend 2019. It was at that gathering—the last time before the pandemic that a large group from the class could meet in person—when they decided to adopt a new class project to raise money for needed repairs and upgrades at the Chapel and to accept the renaming of the Chapel of the Perfect Friendship for their class.

Soon after the Class of 1963 Chapel fundraising project became official, Gary Knisely ’63 stepped forward with a major contribution made possible by two recently matured charitable remainder trusts he created some 20 years earlier when he sold his business, a Manhattan-based executive search firm. “I wanted Trinity to use the trust proceeds to meet an important need,” says Knisely.

“Trinity College financed at least 50 percent of my college education,” adds Knisely, the lead donor to the project. “I felt this would be a great way to honor my class and help Trinity jump-start this project.” Also, Knisely notes, “I came to the realization that the Chapel was only 10 years older than I am. It seemed to me that my money could be best spent to prolong the life of the Chapel into another century.”

Reynolds says, “Our class has become very special for the college in that we have, more than most other Trinity classes, been successful in keeping our friendships current and staying relevant in each other’s lives. This is something worth celebrating and remembering.”

Adds Jim Tozer ’63, P’89, ’90, GP’22, “There’s a certain pride and a certain pleasure among my classmates that through bonds of friendship and our broadly shared commitment to the Class of 1963 Scholarship, our class has stayed uniquely close to each other, to our spouses, to our scholars, and, as a result, to the college itself. Given these multidimensional ties of quite perfect friendship, why not have the class take a leadership role in funding the Chapel renovation in the name of the Chapel of the Perfect Friendship?”

At the deadline for this issue of The Reporter, the Class of ’63 had raised approximately $3 million for its Chapel project and was planning an April 4, 2022, ceremony to dedicate the Class of 1963 Chapel of the Perfect Friendship. The Class of ’63’s Chapel fundraising efforts are part of the current Trinity College Chapel fundraising initiative, which seeks to raise $10 million to restore and endow the building and its programming. To learn more about this initiative, please see below.

For information about the Trinity College Chapel fundraising initiative, please contact Linda Minoff, director of gift planning, at linda.minoff@trincoll.edu or 860-297-5353.