Project Concern, a city-to-suburb voluntary integration program, attempted to challenge the traditional rule that your address determines your education. In 1966, hundreds of Hartford minority students signed up to ride busses to predominantly white suburban school districts that agreed to participate. On the front lines of this integration program were two women- Marjorie Little, an African American paraprofessional and Mary Kennedy, a white suburban school teacher. 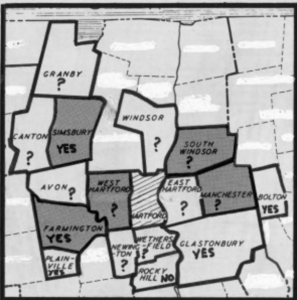 In the 1960s, school desegregation was a major issue within the Connecticut Public Schools specifically within Hartford, CT. School desegregation was an attempt in ending the practice of separating children of different races from each other and into distinct public schools. The historical nation wide case, Brown vs. Board of Education (1954) sparked a step in the direction towards desegregation within public schools. Numerous Supreme Court decisions since this case have pushed our constitutional rights pertaining to the desegregation put forth in Brown vs. Board of Education. Within the year of 1966, a program was created known as a Project Concern consisting of a two-year experimental plan. This plan stood for a guide to desegregate schools and eliminate any racial imbalance within Hartford, Connecticut. Today this program is known as Open Choice.

Marjorie Little first heard of Project Concern in 1966. Little and her husband lived in Stowe Village, where they attended “workshops”, discussing topics like education with tenants. Little felt that Hartford could educate her children and that it would be unnecessary for them to travel out of the city to receive a solid education- until she witnessed the failed education of her first child, Joseph. Little was raised in Hartford and attended Hartford schools until grade four. Her family then moved to South Windsor and she attended schools there until grade seven. Little went back to Hartford for seventh, eighth, and ninth grade. And then back to South Windsor for the rest of high school, finishing school in 1951. Little believed that she received the same caliber education at both her urban and suburban schools so she felt that her children would have the same experience in their schooling. She later found that to be untrue. Little had already been working for Project Concern when she learned that her son, in 9th grade, was reading the same book as the 5th graders at the school she aided in South Windsor. Little was active in PTA at the school Joseph was attending and thought that the school was doing a fine job. It was then, though, that her opinion of Project Concern completely shifted. She became a full supporter explaining, “The parents who wanted a different type of education for their child should have the opportunity.” Little sent her middle three children to private schools and her last child, Philip, went through Project Concern from grade one to twelve. 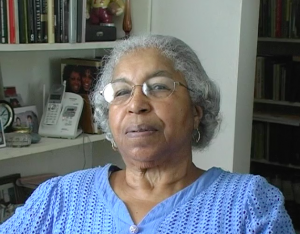 Marjorie Little acted as a teacher’s aid, meaning she would ride the bus with children traveling from Hartford to South Windsor and worked closely with the students at school. Parents felt they could trust her and the rest of the aids. Hartford parents who were apprehensive could contact Little or any of the other aids with questions and concerns. Many parents were nervous about the safety of their children, but the aids were there to reassure them that everything would be okay. Some South Windsor teachers were against the bussing, but Little did not feel that South Windsor was an area greatly opposed to Project Concern. Little, though, explained that the greatest obstacle for Project Concern were Hartford Board members. Every year advocates had to fight to keep Project Concern a part of the education system. Board members felt that kids traveling to suburban schools were draining Hartford of money. Little and others worked tirelessly so that their children would not have to leave the suburban schools that were providing a better education than the Hartford schools were capable of.
Around the same time that Little was beginning her work with Project Concern, Mary Kennedy was a fourth grade teacher at Eli Terry School in South Windsor. New to the area, Kennedy was determined to uncover as much about the town and its education system as she possibly could. South Windsor became one of the first communities to utilize Project Concern and adopt the bussing program. Kennedy recalled one of her first experiences with Project Concern. She attended a public hearing which “wasn’t pretty”. She recalled, “One parent stood and she said ‘I’m Trude Johnson, I’m from Tower Avenue in Hartford’ and she said ‘Please, give our children this chance.” and it was beautiful.” Kennedy described this encounter as one of the strongest examples of how important this program was to Hartford residents. Kennedy became most in favor of the program when she first taught students from the program. She still keeps in touch with them today. 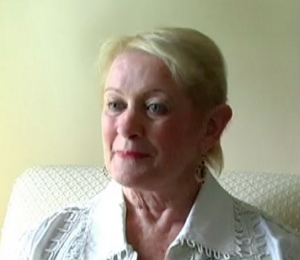 Kennedy, for the most part, had a white, suburban perspective on Project Concern as it was where she was living and the connections she developed there. She wouldn’t be sending a child through the program and she wasn’t a minority living in Hartford. It wasn’t until Kennedy met Marjorie Little, a paraprofessional with Project Concern assigned to South Windsor, that she began to see Project Concern from the perspective of Hartford residents who truly needed the program. Little brought Kennedy to areas of Hartford she had never traveled to. Little taught Kennedy more than just how the education system worked, but also about the people and culture of the area. Little and Kennedy became more than just coworkers, but also friends. Little encouraged Kennedy to apply for the job of Research Teacher with the Project Concern Program and when the position opened, Kennedy filled it. After a year, though, Kennedy resigned from this position and became an employee of the Hartford Board of Education assigned to Project Concern, specifically for the town of South Windsor. Kennedy attributes Little partly for her ability to work closely with families and students. Kennedy sat in on Hartford Board meetings and listened to the teachers union’s dislike for the program. They argued that the best students were being taken out of Hartford, even though both Kennedy and Little explain that children were selected to participate at random, or at least based on demographics not test scores. The board also feared that the children leaving Hartford schools would take their heavily invested parents with them. Kennedy described the attitude towards Project Concern as, “If anything was wrong with the school system in Hartford it was because of Project Concern.” Even through the negativity Kennedy explained “Our kids became successful; they became successful because things were put in place to make them successful we had that supportive team.”
In 1982, Kennedy became director of Project Concern, around the same time that the Hartford Board of Education was most heavily pushing to end the program. The Board declared that the program could no longer be used in parochial schools. A year later they were voting to end the entire program, blaming the budget. However, the program continued. “All of the districts waived the tuition fee that had been paid to them at the time so that the, our budget was reduced that way. We did lose some staffing but we were able to keep some of the supportive staff and the transportation.” Hartford could no longer declare Project Concern a budget issue. Project Concern did end though in 1998. When Project Concern ended, CREC (Capital Region Education Council) asked Kennedy to join their program, Project Choice which has now become the Open Choice Program. From 1998 to 1999 Kennedy worked at CREC as a Hartford administrator and in 1999 she retired from the Hartford Board of Education and worked for CREC fully. Kennedy left CREC full time in July of 2001 but continued working part time until 2002.
Open Choice Program within the Hartford region gives opportunities to students to attend the non-magnet district schools within suburban towns, and also allows the students in the suburban communities the opportunity to attend non-magnet district schools within the city of Hartford at no attentional cost to the family. If a family wishes to enroll their child in the Open Choice Program they do this voluntarily. To apply their children to the program they must fill out and submit a RSCO lottery application. After the application is sent the child is either placed in a school or on a waiting list. This process is all through the RSCO lottery. Students who are eligible for placement and currently have a sibling within the program are allowed a preference within the lottery, but only for the town where their sibling attends. This rule also applies to families that choose “Open Choice on the RSCO lottery application”. Transportation is also provided at no fee for Hartford families and even for suburban students who attend Hartford schools.
Students enrolled in the Open Choice program have a much higher chance in receiving a post-secondary education, and the majority attend four – year college institutions. Open Choice allows any public school student of any “talent, english language learners, and students receiving special education services” It pushes to be equal and open to students from “diverse racial, ethnic and socioeconomic backgrounds”
Mary Carroll Kennedy and Marjorie Little were backbones for the Project Concern Program. Kennedy, a white, suburban teacher, and Little, a black, urban parent, symbolize the urban, suburban partnership driving equal education. Both women, passionate about Project concern, and deriving from very different backgrounds, agree that the success of Project Concern can be heavily attributed to the paraprofessionals that are missing from the Choice Program today. Kennedy states that the paraprofessionals, like Little, “were that bridge between the Hartford parents and the suburban communities.” The paraprofessionals were there to support the students attending suburban schools. Kennedy, addressing current legislators, says:
“Go back to the original design of Project Concern and look at it, read it, become familiar with it and put that in place. Otherwise stop calling the Capitol Region Choice program a continuation of Project Concern because it isn’t. The support services for these children are vital.You are taking a student from the city of Hartford that has a struggling education program and you are placing them in highly academic suburban communities and without any support and that isn’t right. I’m sorry but it is the education of these children that they should be looking at, not the numbers that they need to make the Sheff lawsuit. And that’s what they’re doing now. It’s a numbers game between the Sheff people and the state and these children are suffering because of it.”

2 thoughts on “1966: The Women Behind Project Concern”