#13 How do you locate a scholarly reviews of Doug Harris’ book, Value-Added Measures in Education? Describe your search strategy and summarize criticisms of his book.

To say the least, I was not entirely sure on where to begin my search for scholarly reviews of Doug Harris’s book, Value-Added Measures in Education. In part, my confusion was attributed to the ambiguity of the term “scholarly.” What exactly determines what would make a review “scholarly?” Is it a review written by a professor and/or a person with some higher level education affiliation? Regardless, I knew I had to start somewhere.

That said my motto has always been “when in doubt, use Google,” so I simply typed in “Scholarly reviews of Doug Harris’s book Value-Added Measures in Education.” Unfortunately (yet admittedly, unsurprisingly) my Google search did not provide me with much other than some blogs and articles citing the book. None of which seemed “scholarly” or at least appeared “scholarly” based upon my interpretation and understanding of the word.

I then decided to turn my attention to the “Search Strategies Resource Page” (compliments of Jack) and checked out WordCat.org. Unfortunately, my attempt was yet again unsuccessful, as no results matched my search of “Value-Added Measures in Education au: Doug Harris.” I decided to make my search less specific and took out the “Doug Harris.” To my delight, I did get results, however, there were far too many “matches” and only one of which actually applied to Doug Harris’s book. Yet again, no “scholarly” reviews were found and it was back to the drawing board. 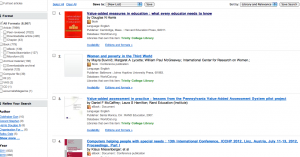 With an escalating frustration, I decided to make an appointment with Jack the following day. Together we went through and discussed various alternative search strategies. I began by searching EBSCOhost for “Value-Added Measures in Education” in the “title field.” I was relatively successful with two matches—one written by Stephen Sawchuk called “‘Value Added’ Use at Secondary Level Questioned” and another review written by Lane B. Mills, featured in School Administrator. Two matches was a good start, but I knew it was not enough and my search resumed.

More hopeful, I decided to try my luck again and check out the “Google Scholar” search engine. I used the “advanced search” and typed in “Value-Added Measures in Education” in the “with exact phrase” box and clicked on the “Since 2012” link to the left. 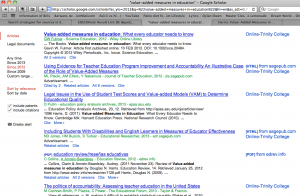 To my delight, about 36 searches appeared in approximately 0.06 seconds. One of the results I found was a rebuttal to a rebuttal, as you will.  The authors had written a review of Harris and his book, which was later greeted by a response from Harris and low and behold, here I was reading the reply to Harris’ rebuttal. It was written by Clarin Collins and Audrey Amrein-Beardsley of Arizona State University where they were essentially defending and standing by their original interpretation of Harris’ belief that “value-added is good enough to be used for educational accountability” (Collins 2012 pg.3). After quoting various sections of Harris’s book, they conclude by asserting that they are standing by their original review of Harris’s book and furthering that “value-added is not good enough to be attaching any sort of consequences much less any such decisions to its output. Value-added may not even be good enough even at the most basic, pragmatic level” (Collins 2012 pg. 4).

In summarization, the book was incredibly controversial. Generally speaking, the criticisms of Harris’s book did not vary greatly. Many of the reviews praised Harris in his ability to express the pros and cons of value-added most comprehensively (Collins 2011 pg.2) Most common of the criticisms was that there was no real definitive conclusion in the book and in effect, “…readers will take away various perceptions on the author’s stance” (Collins 2012 pg.3). Furthermore, many of the criticisms featured claims that Harris’s logic was often times confusing “…even for readers who are familiar with value-added and the research” (Collins 2011 pg.2). Support for this claim was Harris’s belief that demographic information should be left unaccounted for when calculating value-added, however he maintains that “research evidence” indicates that students deemed as disadvantaged grow at slower rates (Harris pg. 75). Critics of Harris argues that this claim “counter[s] his logic that these factors should go away over time” (Collins 2011 pg.3). Additionally, Harris has been criticized for downplaying the importance of the various concerns and issues presented in the book that completely contradicts the very essence of value-added and its sensibleness—drawing support from Harris’s segment on the method’s inability to properly judge teacher effectiveness and the inadequate attention said issue received.

For some interesting reviews on Harris’s book Value-Added Measures in Education check out the following:

One thought on “A Strategic Search for Scholarly Reviews: Doug Harris’s Value-Added Measures in Education”