Today, Native Americans are one of the most under represented groups in the hierarchy of American culture. In the past they have been viewed as savages and lower level members of society. Attempts to educate the Indians were based on the ideals of assimilation or nothing at all. Policymakers never took into account that Native Americans had their own set of skills and intellect that they could bring to the table. In general, the system of mass education, not only Native Americans but for other immigrants has been based around deculturation and not ingratiation. This process is successful in creating a mostly unified nation but it fails to account for aspects of ethnic identity that cannot be drawn out and erased. The reason why Native Americans have done so poorly in decades following the 19th century is because the assimilation or Americanization process was in opposition to their culture so it was destined to fail.

How and why did the leaders of Hampton Institute attempt to assimilate Native Americans and African Americans (particularly during 1870s-1900), and how similar or different were the experiences of the two groups of students?

The 19th century saw the rise of the common school movement, which changed American education forever. The common school movement led to the collective socialization of the American population. Native Americans and African Americans have a similarity in that they were conquered and marginalized by whites. An Americanization process was inevitable. We will look at Hampton Institute in the 19th century in order to understand how this Americanization process happened for both Native American and African Americans. Both the techniques  used and the outcomes are important in comprehending the educational values of both of these marginalized minorities today.

Hampton University is a historically black college in Virginia. In 1885 its founders described it as “a school for freedmen, which gradually, under the care of the American Missionary Association, came to assume proportions which showed beyond question that situation, surroundings and opportunity had combined to make it one of the educational centres of the South.” The school began in 1868 as Hampton Normal. It started with 15 students and two teachers. In 1878, a party of seventeen Indians were brought from St. Augustine, Florida where they had been prisoners of war. This became the nucleus for the Indian Department at Hampton.

“For a majority of cases the three years’ Normal course is preceded by a year in the Night School, during which time the students work eight or ten hours daily and study two hours in the evening an arrangement which…weeds out effectually the incapable or unwilling.”

“The entire course includes, or more correctly begins and ends with the essentials of a good English education. Nothing more is attempted because experience has shown us that nothing is more needed to fit our students for the work which is before them.” (p. 8)

Its important to look at the rhetoric that this writer uses when describe the education of Native Americans. “Will Indians study? Can they learn.” “Will Indians work? Can they be broken into civilized pursuits?”

In this time period the rhetoric used to describe the Native Americans was very disrespectful and it is representative of the negative perspective that the white American ideology had on Natives. 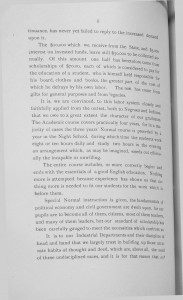