Prompt: How do you find reviews and essays about video documentaries? Describe your search strategy and cite the 5 most thoughtful reviews or background essays on a designated video documentary. Your search results may include scholarly and/or popular press, but do your best not to include those featured on the film’s companion site. (Hint: the goal of this question is to help your classmates identify thoughtful sources that do not necessarily agree with the policy stance taken by the film.) Add a brief explanation for why you recommended each of the five sources you selected.

For this assignment I met with a Trinity librarian, Erin Valentine, who significantly helped me in answering how to find thoughtful reviews and essays about video documentaries, in particular “The Cartel” by Bob Bowdon.  We began the search on the Trinity College Library homepage, and since I was looking for reviews, Erin told me to search under “Articles”.  From there, we searched by database title and chose “Education Full Text” and then hit “Go”. 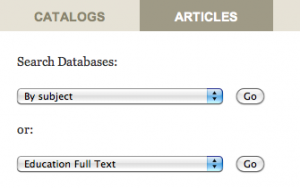 On the next page, I was told to select “Choose Database” and chose a few other relevant databases such as Social Sciences full text, Humanities full text, and Readers’ Guide full text. 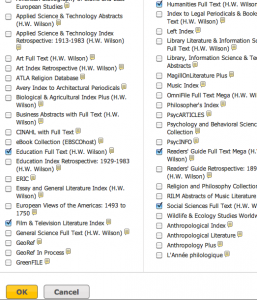 I then searched under “The Cartel”, but the results pertained to mainly drug and oil cartels and had nothing to do with the video documentary.  I then went back to the previous page and added the writer/director’s name, Bowdon, to the search.

Since this only provided three reviews of the film, I added the database “Film and Television Literature Index” to my search.  This also only offered five reviews, which Erin suggested was probably the result of how recent the film was made.

A few of the reviews found from that particular search proved thoughtful and informative, but not all five.  After my next search in JSTOR was unhelpful, I then targeted Google as my next method of researching.  Google News and Google Scholar both left me empty-handed, and simply searching “The Cartel Bob Bowdon” under Google mainly produced biased positive reviews from companion sites.  However, this same search led me to the Wikipedia site for the film, whose “References” section surprisingly produced the two most thoughtful and insightful reviews I found.

Interestingly enough, many of the reviews I came across found that Bowdon had the right idea in mind and agreed with his general stance, but they do not write favorably about the film.  Most reviews were harsh critiques and portrayed the film in a negative light.  This is the advantage of using reviews from databases other than the companion site because they are not biased and give both negative and positive feedback.  Below I have listed and explained the five most relevant reviews of Bob Bowdon’s “The Cartel”.

“A Digestible Lesson in Public-School Failures” by Wesley Morris

Morris takes an unbiased stance on the film, praising the message that Bowdon is trying to get across that current public school systems are corrupt and dysfunctional, but he also critiques the quality of the film itself and the righteous and condescending way Bowdon portrays himself.

MacQuarrie gives less of an opinionated account of the film and more so sheds additional light on the problems and absurdities within the public school system in New Jersey.  He seems to reiterate and agree with many of the film’s points, showing Bowdon and his film in a positive light.

“Children Left Behind” by Jeannette Catsoulis

From the New York Times, Catsoulis provides a rather negative portrayal of the film, pointing out that Bowdon merely focuses on the single state of New Jersey even though the film is supposed to be targeting the public school system on a national level.  She calls the film “a bludgeoning rant against a single state” and finishes her review by stating that the film is “visually horrid and intellectually unsatisfying…demonstrates only that its maker has even more to learn about assembling a film than about constructing an argument”.

“The Cartel” by John Anderson

Taken from an entertainment magazine as opposed to a major newspaper, this review presents the film as ubiquitous oxymoron.  Anderson argues that its central message of the dire need to change dysfunctional public school systems is undeniably correct, but Bowdon makes several crucial mistakes such as ignoring the ramifications of the No Child Left Behind act, limiting the film to New Jersey public schools when the film is supposedly of national scope, and presenting a one-sided and voiced-over interview with Joyce Powell, the president of the New Jersey Educational Association.

Brion-Meisels, an editor from the Harvard Educational Review, shines light on the tone of the movie, which she suggests points towards the idea that the culture of charter schools is more valuable than the cultures from which underprivileged and low-income students come from.  She notes that the film seemed more like a negatively charged method of propaganda towards teacher unions by simply showing failing statistics and not detailing the stories behind them.

A special thanks to the librarian, Erin Valentine, for helping me through my research.

One thought on “Finding Reviews about Video Documentaries and Avoiding Bias”