Prompt: How do you find reviews and essays about video documentaries? Describe your search strategy and cite the 5 most thoughtful reviews or background essays on a designated video documentary. Your search results may include scholarly and/or popular press, but do your best not to include those featured on the film’s companion site. (Hint: the goal of this question is to help your classmates identify thoughtful sources that do not necessarily agree with the policy stance taken by the film.) Add a brief explanation for why you recommended each of the five sources you selected.

When starting my source detective question the first thing I did was go to the Google search bar and typed in what I was trying to find; in that case the film Waiting for Superman. Initially the first thing that popped up was the movie’s website. Before watching a movie I’d like to do some prior reading so the Wikipedia link is my first instinct to click on. The reason why Wikipedia is actually a useful source is because it can be edited, therefor is always relevant, and anyone can contribute whether biased or unbiased. The Wikipedia source helped me have a brief understanding of what the film is about. 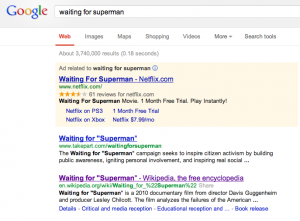 But then, I wanted to see some actual clips of the movie, maybe the trailer. YouTube gave a quick 2 minute trailer showing the emotion and almost the drama that a Wikipedia article cannot show. Although it is biased in the film’s favor, it gives the future viewers what to expect when watching. However the trailer only gives a single perspective. Rotten Tomatoes gives the perspective of nearly 17,000 raters and 114 critics. Seeing that the average rate was a 4/5 stars I figured that the audiences felt touch in what they were watching. The comments ranged from those who had similar experiences while in school to actual teachers totally agreeing with the message of the film. 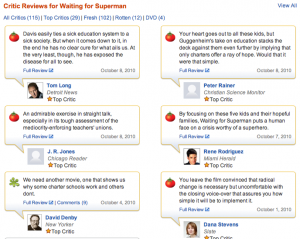 However out of the 114 critics, there were 12 who considered the movie to be “rotten” and they expressed how some of these teaching strategies don’t work or how the director did a poor job not portraying the obstacles students faced outside of school that led to failing performances in school. Overall Rotten Tomatoes was a great source for me because it shows the good and the bad. Not to mention it being number 5 out of 3,540,000 search results on Google.

After unsuccessful attempts on JStor and the Trinity library data base searching for essays, I went back to Google. I spotted a Time Magazine link and knew Time likes to write up these “heroic” articles in order to give a normal person praise. In this example it was Geoffrey Canada and Michelle Rhee, two ordinary teachers who cared about the lives of children rather than their own salary. According to Time, these are the types of people that we need in the education system to “save our schools”. I feel that the purpose of a Time article is to help turn regular people into heroes, unlike the simple essay done by a college professor. In my opinion they do a good job because they depict these people as “tough sheriffs brought in to clean up a bad town”. 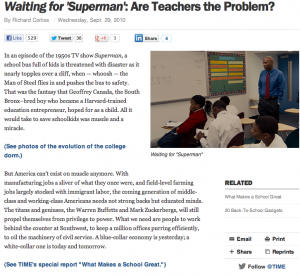 Scrolling down allowed me to find an article called NOT Waiting for Superman so I clicked on it in a heartbeat. This article is basically stating that the film is like a fairy tale, misleading everyone who is watching. I found it to be comical because it’s saying the steps that are being made to improve public schools: getting rid of “bad teachers”, firing principals, and bringing in new charter school teachers will not work and will end up hurting public schools. This alternative article attracts a bunch of commenters, most who are teachers who agree that the teachers cannot control a situation outside of school that is causing their students to fail and the “charter school solution” is not the way. This source helped me see the negative side of the film.

I was finished with Google and I wanted to check out what the Hartford Courant had to say. One of the first articles that popped up was one by Diane Ravitch. Since I had been reading her book The Death and Life of the Great American School System I was fascinated to see what she had to say. I liked this article because she gave a lot of statistics about state test scores which the other sources don’t give. Rather than being so much of a critic about the film, Ravitch gives out useful facts that can help an audience understand how students are actually performing in the schools that are failing and charter schools will help pan out the future of failing students.

One thought on “How do you find reviews and essays about video documentaries?”