Governor’s Scholarship will direct funds to the neediest students first as it shifts state-funded financial aid from being institution centered to student centered. Armed with a 21 page Briefing Book, the Office of Higher Education (OHE), led by their Executive Director Jane Ciarleglio, broke down Governor Malloy’s proposed policy shift on financial aid into a palatable, comprehensive plan before the Higher Education subcommittee of the Appropriations Committee on March 5th.

Under Governor Malloy’s proposed scholarship program, the three programs currently in existence: Capitol Scholarship Program, Connecticut Independent College Student Grant Program (CICSG), and Connecticut Aid for Public College Students Program (CAPCS) will be streamlined into one program that has one single set of goals. Ciarleglio stressed that “at this point we are trying to make one single program with the same goals. One single way that people will be assessed on what your need is. This will direct funds to the neediest students first.” The goal is to have all students treated the same regardless of what institution they are attending.

As the state-aid program currently exists students were never assured the same award from differing institutions as aid was determined by the delta between Cost of Attendance (COA) and Expected Family Contribution (EFC) as explained by Mark French, from the Financial Aid department of the OHE. Under this arrangement, cost of attendance will not be factored in meaning that the Governor’s program is just based on need.

The committee interrupted with questions constantly during the presentation as the “lingo” of financial aid and all the acronyms involved are dizzying.   Representative Walker asked for clarification on what “COA stands for?” indicating that she was unclear on some of the language used. Ironically, this is one of the points the OHE was attempting to get across- that financial aid as it exists on the state level and federal level is confusing, convoluted and lacking in transparency to students.

While they can only deal with state aid, their hope is that by creating this uniform system it will give students a base to work off of. Students will be flat funded under this program, meaning regardless of where they choose to go they will receive the same amount from the state.

Representative Fleischmann raised concerns that this flat funding may not incentivize students to move up and asked “are we creating an impediment to this ladder?”. The ladder he was referring to is the process of transitioning from either high school to higher education or from community college to a 4-year school. Ciarleglio emphatically stated “NO, this is not an impediment as students will actually know their award and this policy change directs the limited state funds to be used for direct educational costs”. Direct educational costs are tuition and fees, which these awards are limited to being used for.

She continued on to say that “the current programs were designed to encourage access to higher education and are funded and awarded based on institutional needs and goals. Because they are based on institutional priorities, they pit institutions against each other for state funds and their use of state funds cannot be measured in any consistent manner to meet state-wide results requirements such as the RBA. The policy change moves the programs to a single set of goals for access, retention and completion that are student centered.” The proposed program seeks to achieve retention and completion by providing “incentive awards” to students who are on timeline to graduate in two or four years (from community colleges and four year schools respectively) and who exceed the minimum satisfactory academic performance. This plan also includes a time limitation on how long you can receive the funds- 3 years for a 2 year degree and 6 years for a 4 year degree, which hopes to increase completion as this cap previously did not exist.

State aid only represents 9% of the available financial funding for students, this plan hopes to “make best use of that small money for the most needy kids” and in turn alleviate the debt burden for these students. Most of the committee was shocked that state aid represents such a small portion of funding available to students. In 2011-2012 47% of aid came from institutions themselves, 39% was federal aid and the remaining 5% from private funders.

Although initially it was indicated that awards will go to full-time, degree-seeking undergraduates at Connecticut non-profit colleges and universities. Representative Willis indicated that the Governor had indicated that part-time students will be included in these programs also during the course of the meeting.  This alleviates one of the many critiques of the plan, as funding only full-time students was strongly opposed when the proposal was first introduced.

While the proposal seemed to make sense at the end of the hour long presentation State Representative Roberta Willis, State Representative Victor Cuevas and State Representative Toni Walker still expressed having concerns about how these changes will play out in students receiving the funding they need to attend college. More explanatory sessions like these will occur in the future as more questions will arise regarding the state of financial aid in our state. 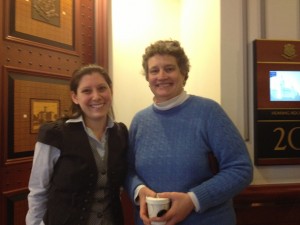 State Senator Beth Bye and myself

Rachael is a Trinity College IDP student. She is majoring in Educational Studies with a concentration in civic engagement in community colleges and how policy must change to reflect the shifting roles of community colleges in our new economy.   She is a proud graduate of Norwalk Community College.