On Tuesday, March 5, the Hartford Board of Education gathered in the library of Hartford Public High School to hold a workshop meeting.  At roughly 5:30pm, the meeting commenced with a brief introduction and expression of gratitude from the Chairman, Matthew K. Poland, to the parents, teachers, and other observers who filled the room.  After discussing the School Climate Data Review, the Board transitioned to the Talent Management Report.  This report, led by the Hartford Office of Talent Management, aims to significantly improve Hartford public schools by employing energetic and talented educators with the intent of closing the present student achievement gap. 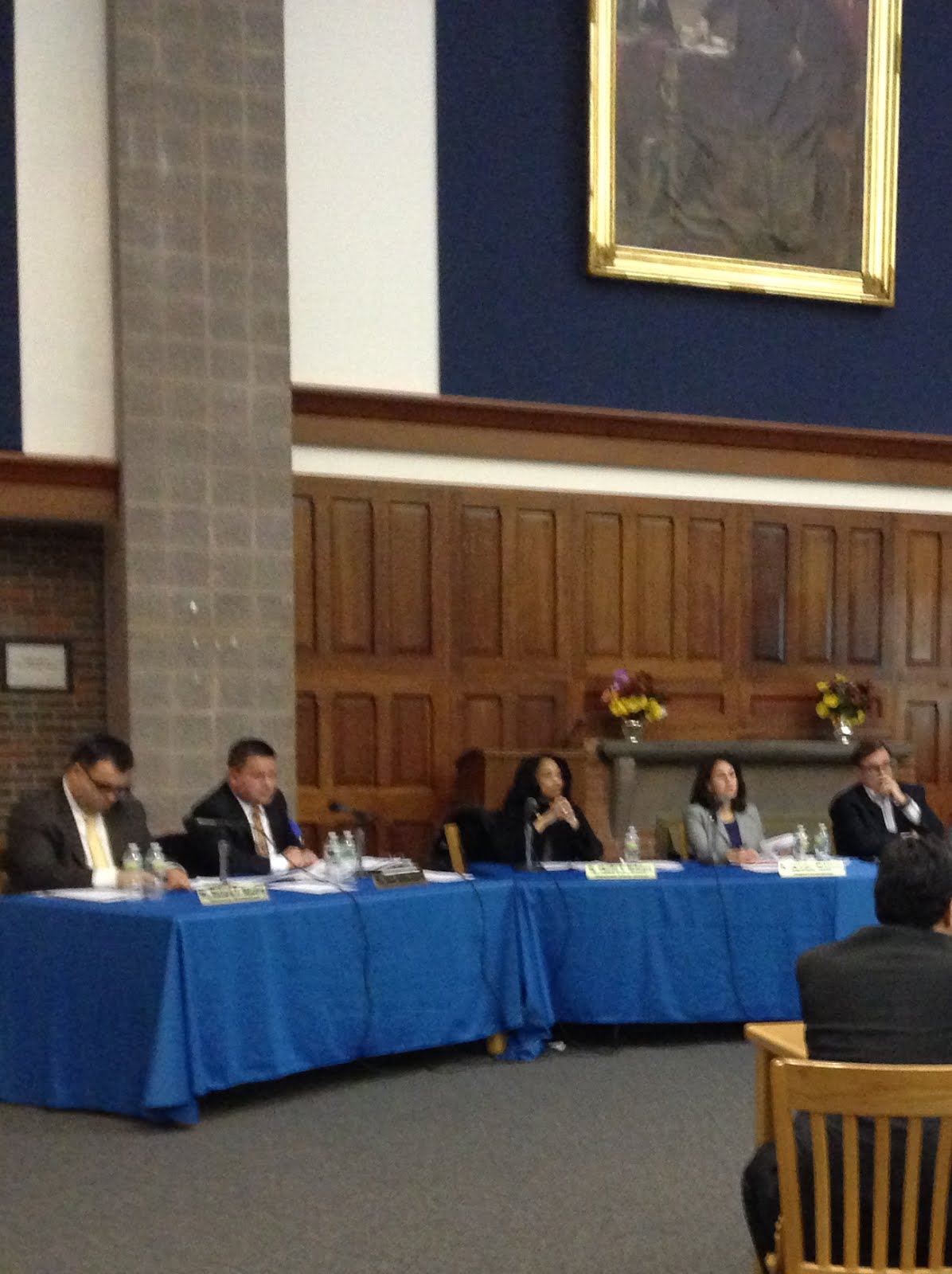 Headed by the Chief Talent Officer Jennifer Allen, seven representatives from the Hartford Office of Talent Management began their presentation. She explained that as part of Hartford’s school reform initiative to close achievement gaps among students, the Human Resources Department was converted into the Office of Talent Management (OTM) in October of 2010.  As stated in the handouts available to the guests, the purpose of the OTM is to “ensure that each school is led by an effective leader and that each leader has the support to develop and retain highly qualified teachers from recruitment to induction and ultimately through their career path development”.  Allen stressed that their office aims to seek extremely intelligent and effective teachers, with a special focus on retention. The OTM will not simply look at the mechanics but at what they can offer these teachers to help guide them towards attaining greater student achievement.  She then introduces the five departments of the office, which she calls the “buckets” for the “deliverables”, or in other words the catalysts for their accomplishments.

The five departments of the Office of Talent Management include: Recruitment, Staffing, Professional Development, Performance Management, and Information Management.  Each objective was explained by a different representative of the OTM, all with different goals and intentions.  Tasha Cannon, Coordinator of Recruitment, after having already met with 44 prospects as educators for the 2012-2014 school year, noted that the most challenging and important part of her task is convincing these intelligent and qualified prospects to actually apply for positions as teachers in the Hartford public school system.

As someone who was educated in Hartford school systems, Natasha Durrant, Director of Staffing, had a unique interest in creating a culture that allows people to grow, learn, and connect in many ways.  As she explained, her job entails keeping up efficient and effective employee relations, or simply providing custom service.  One of her goals included “increasing the satisfaction of our human capital managers (principals) to 95% or better”.  The current rate of satisfaction is 85%.  After Board member Richard F. Wareing questioned how satisfaction is measured, Durrant replied that this evidence is concluded through multiple surveys given to the principals.   She noted that the current rate is 85%, and after being questioned by the Board member Richard F. Wareing how satisfaction is measured, she replied that they conclude this evidence through multiple surveys.

Joanne Manginelli, Director of Professional Learning, commented that her job is to ensure the retention of effective teachers and leader as well as assess what the children are learning and to implement an instructional core that is “supported by a rigorous curriculum… that addresses the needs of the diverse learners within the Hartford Public Schools”.  She stated, “we want to retain our ‘irreplaceables’”, or their highly valuable teachers.  Similarly, the Director of Performance Management, Scott Nicol, pointed out that one of the most important aspects of student performance is to retain teacher effectiveness. Also, increasing the number of classroom observations will help measure the credibility of a teacher and make sure he or she is effectively teaching the students.  With more accurate measurements of teacher performance, students will benefit from more effective methods of teaching and in turn be more likely to perform well in the classroom.  The most significant measurement of performance is the increase in the number of classroom observations.  Compared to last school year, when the number of required observations was 1,000, the number this year is 4,000.  They plan to require 5,000 by the 2013-2014 school year.

Guillermo Garcia, Director of Information Management, spoke about the last of the five departments.  His department’s objective is to convert the employee life cycle into an information life cycle, which would collect, process, maintain, disseminate, and archive all of the OTM’s data.  They want to create a data warehouse, which will be set up as a reporting tool to allow information from different departments to be integrated and linked.  These enhanced reporting capabilities would provide increased feedback on what needs improvement.

To end the entire presentation, Allen, the Chief Talent Officer, restores her turn with the microphone and quickly summarizes the priorities, or as she calls them the “deliverables” of the OTM.  She emphasized the need to “integrate culturally responsive pedagogy into the core instruction”, and explained how the office is “working on building a diverse talent pipeline”.  Her method of “grow your own” relates to the concept of attracting educators with Hartford roots, like the OTM’s very own Natasha Durrant, to come back and teach.  This idea is also heavily stressed in the informational video, which is more like a sales pitch, on the homepage of the Office of Talent Management’s website.

During the “questions” segment after the presentation, the OTM representatives met a bit of criticism and uncertainty from the Board of Education members.  In particular, a moment of extreme tension was felt by everyone in the room when the Chairman, Poland, expressed his disdain for the term “human capital” by naming it his pet peeve and saying it “leaves me feeling stone cold… do not call our people ‘human capital’… seems like we’re doing this for numbers and metrics, not for people…doesn’t feel right”.  His chastisement was met with Allen’s awkward understanding and follow-up defensive remark, “I hope you wouldn’t think that’s our attitude about working with people”.

After several questions regarding the rate of attrition for principals, the result of potential continuous attrition of educators, and the strategy for underperforming teachers, Manginelli vaguely responded with a strategy that included making sure these underperforming teachers have what they need to move forward and progress and to make certain that principals are participating in this process of increasing teacher performance as well.  She also noted a strategy she called “peer coaching” where educators from different schools and districts could meet and discuss ideas and methods of improving their performance.

Although this discussion did not end in a concise manner where definitive action was decided upon, the presentation and the questions asked by the Board of Education helped clarify the main goals of the Office of Talent Management for the years to come as well as the means of attaining these goals.  Manginelli pointed out that the OTM is looking forward to working toward developing a baseline, which will not begin until the 2013-2014 school year is in session.  Even though there were some discrepancies with the implementation of the Office’s goals, it is a promising attempt at future educational policy reform in the heart of Connecticut.