In Kate McEachern’s 2005 essay, she wanted to know when major newspapers began using the phrase “teach to the test,” and found a creative way to answer this question. Describe her approach and replicate how she did it.

In Kate McEachern’s 2005 essay she set out to find out when the phrase “teach to the test” was first used in major newspapers. In her essay she describes going to the New York Times Historical Archive Database, which led her to the answer of 1966. In order to replicate her search eight years later I went to the ED300 page of search strategies for sources. Towards the bottom of the page I found a link to search additional national newspapers such as the New York Times. The link took me to the ProQuest advanced search for News and Newspaper where I typed in “teach to the test” or “teaching to the test”. I then specified “Newspapers” and “Historical Newspapers” as my source type as well as all dates. 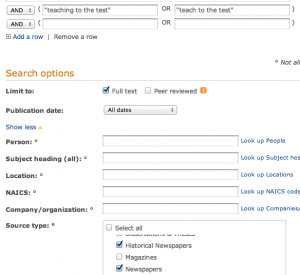 I then chose my sort results to be by oldest publication date first. Although illegible the first relevant search result was a New York Times article from February 16th 1969 by Fred M. Hechinger called “Why an ‘A’ by Any Other Name Smells Bad”. Surprisingly after searching both ProQuest and the New York Times Historical Archive Database the 1966 article was not found. The New York Times Article Archive gives two options when searching the archives. The first is from 1981 to present and the second is 1851 to 1980. Yet certain articles are only available to subscribers. Therefore when I searched for Leonard Buder’s specific article called “Report Card for Schools?” from May 29th 1966 I was unable to view the document.

One thought on “Replicating a Search”