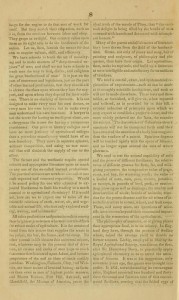 In the mind of many educators, colleges created by the Morrill-Land Grant Act of 1862 have come to represent the vehicle to the American dream. When created, they boasted “flexible entrance requirements, free tuition, expanded courses of study, and democratic atmosphere [which] were unprecedented in universities in the United States or anywhere in the world” (Cross). No scholar denies that the signing of the Morrill Act was itself historic. The missions of Land Grant institutions were explicitly aimed at creating non-elite colleges where members of the working classes could obtain a practical and liberal education. Historians, during both the centennial and sesquicentennial anniversaries of the Morrill Act, were motivated to interpret how higher education has evolved as a result of this legislation.

Given the context in which these histories were written — the early 1960’s and then again in 2012 — it would be a fair assumption that different stories would be told upon its 150th anniversary than on its hundredth. After all, hindsight is 20/20. It is surprising then, that in a fifty year period historians provide rich descriptions with more similarities than differences when interpreting this Act. This paper is an exploration of the Land-Grant Act and how four different historians– two centennial, two sesquicentennial – have explained it.

The Land-Grant Act of 1862 provided states with a grant of land or land scrip amounting to 30,000 acres for each senator and representative to fund colleges in each state with the distinct purpose of:

… the endowment, support, and maintenance of at least one college where the leading object shall be, without excluding other scientific and classical studies and including military tactic, to teach such branches of learning as are related to agriculture and the mechanic arts, in such manner as the legislatures of the States may respectively prescribe, in order to promote the liberal and practical education of the industrial classes in the several pursuits and professions in life. (The Morrill Act)

Named for its sponsor, Vermont statesman Justin Smith Morrill, the act is officially titled “An Act Donating Public Lands to the Several States and Territories which may provide Colleges for the Benefit of Agriculture and the Mechanic Arts.” Signed into law by President Abraham Lincoln on July 2, 1862, sixty-nine colleges were funded with a tripartite function- instruction, research, and extension.

The Act initially included a provision excluding any state that was in rebellion or insurrection against the government. However, in the Reconstruction period following the Civil War, former Confederate States and eventually all states and territories were included. Presently, as the outcome of subsequent legislation, there are one hundred and six institutions with the Land-Grant designation. These institutions provide 85 percent of Bachelor’s degrees, as well as 70 percent of graduate degrees and 50 percent of doctoral degrees, respectfully. Thus, without the Morrill Land-Grant Act, the  landscape of higher education as we know it today would not exist.

Around its 100th anniversary, two of the most widely acknowledged works on the history of the land-grant college movement  were written: Edward D. Eddy’s Colleges for Our Land and Time: The Land –Grant idea in American Education (1957) and Allan Nevins’ The State Universities and Democracy (1962).  Eddy and Nevins regard the movement as an inevitable product of the educational demands within a growing democracy. They consider the Morrill Act a pivotal piece of educational evolution in the United States. Both historians attribute educational reform as a response to demands of farmers as being the principle motivation for this legislation. Centennial historians, by and large, agree that the chief motivating factor in the passage of the Morrill Act was educating the “ordinary person”.

In anticipation of the Act’s centennial anniversary, Eddy published the first general account of development in Land-Grant Colleges. This book offered the first account of the Land-Grant movement from its beginnings to the point at which it was published. The foreword to the book was written by Executive Secretary of the American Association of Land-Grant Colleges and State Universities, Russell Thackerey. Thackerey credits Eddy with writing the most thorough synthesis to date. He acknowledges that much had been written about these institutions, but none have dealt with the Land Grant movement as wholly as Eddy. Eddy represents the dominant view held by historians of his generation. While there were some dissenters, his work is still cited by many today.

Eddy’s book is a success story of the land grant colleges, whose several thousand facts range from the number of books in select land-grant college libraries in 1876 to the number of research projects undertaken in 1920. While Eddy lays out facts and figures, he places even more emphasis on his supposition that the Morrill Act was merely an idea on which a nation built– what we know now as the “people’s colleges”. This simple idea was to train the sons of farmers and mechanics as the next phase in the development of a new type of freedom- an American freedom. This freedom maintained the credo that opportunities must be given to all; as all individuals have supreme worth.

Resulting from the flexibility of this idea, institutions were empowered to move from institutions of limited dedications to “instruments of broad public service to every class and kind … as universities in purpose and fact” (Eddy). Therefore, they were able to dedicate themselves to the trilogy of American ingenuity in an autonomous fashion.

The dominant theme of Eddy’s work, as well as the work of his peers, is the democratic nature of these colleges. Written in the context of the Cold War, democracy screams out to the reader on almost every page. Nevins’ historical perspective rests on the premise that the passage of the Morrill Act was an “immortal moment in the history of higher education in America” and that the most important idea in the genesis of the land-grant colleges and state universities was that of democracy, because it had behind it the most passionate feeling” (Nevins) Further supporting this focus on democracy, Eddy and Nevins histories argue that the federal government passed this legislation as a response to demand. The people ask, and the governments’ response is democracy in action. Both historians shy away from examining how this act was an important piece of federal economic policy.

Eddy makes no attempt to pretend to fully comprehend Morrill’s purpose in introducing this bill. He acknowledges that Morrill, a practical man, argued that this educational framework was necessary because of certain conditions such as the inadequate existing offerings of collegiate education, the rapid dissipation of public land to private interests and the way in which America was lagging behind demonstrated success in Europe— courtesy of agricultural and industrial schools.  While Morrill’s name has become synonymous with land-grant colleges, Eddy, too, credits the perseverance and enthusiasm of Jonathan Turner, “a disappointed schoolmaster and an academic jack-of-all-trades” (Eddy) with laying the foundation from which the movement arose. Turner’s name in the works of latter historians has merely been reduced to a footnote.

Eddy is clear that this is a story of evolution, “a gradual, slow, but steady evolution reflecting the needs of the nation. Sometimes the colleges were ahead of need, sometimes behind, but almost always they responded in some fashion to national demands and changes” (Eddy).  Similarly, the sesquicentennial historians agree that progress was slow. However, when discussed by contemporary historians, the subtle difference is that they indicate a long a period of stagnation due to external factors. These factors are the hindrance of funding to build and improve these colleges as a result of the Civil War. Additionally, two subsequent acts were ratified within this time frame which flooded the market with federal land and caused compensation for the sale of the land to be disadvantageous.

The sesquicentennial anniversary arose at a time when America’s economy finds itself in dire straits. Therefore, funding for the institutions created by the Land-Grant Act are constrained by limited resources and are being asked—more than ever—to prove their worth.  At the start of 2013, President Barack Obama unveiled his “College Score Card”. Created by the U.S. Department of Education’s College Affordability and Transparency Center, these scorecards are intended to help potential students find more bang for their buck when it comes to pursuing their college education. Given the context of this anniversary, it is not surprising that historians’ view of Morrill institutions has become even more idealized and romantic.

In 2012, a collection of essays commemorating the 150th anniversary was published titled, Precipice or Crossroads? Where America’s Great Public Universities Stand and Where They Are Going Midway through Their Second Century. Daniel Mark Fogel, former President of University of Vermont, penned the introduction to this compilation. Coy F. Cross, a professional historian, wrote the chapter entitled Democracy, the West, and Land-Grant Colleges. Additionally, Cross wrote the only recent biography of Morrill, Justin Smith Morrill: Father of the Land-Grant Colleges (1999).

Cross refers to the Nevins work multiple times within his essay. Even though neither mention Eddy by name, his romantic themes of democracy and meritocracy by and large persevere. These historians though, go beyond just reinforcing the earlier perception of the impact of the Morrill Act. They argue that “our great public universities are under threat, and some would say they are facing their hour of maximum peril.”(Fogel) Fogel and Cross drive home upon their readers that these institutions represent the most important sector of higher education and they are facing challenges unlike any that Nevins could have imagined when he wrote his history.

Cross’ piece provides a full timeline of the development of the legislation. Similar to the centennial historians he emphasizes that it was an inevitable outgrowth of westward expansion. Expansion to Cross, was tied to the belief held by 19th century Americans that opportunity and democracy were the American ideal.  Education and democracy were hand in and hand. It was the responsibly of the American government then to avoid the oppression and appalling conditions “urban, industrial life had on British factory workers” (Cross). This would be accomplished by not only instructing farmers and elevating agriculture to a science but as the children of farmers and mechanics became educated, democracy would strengthen as more of the citizenry became educated voters.

Fogel offers the opinion that “without the extensive capacity they provided after WW II to receive returning veterans and, later, the children and grandchildren of the veterans’ generation, America’s postwar prosperity and power would have been unthinkable and unattainable.” (Fogel) Therefore concluding that for America to regain its economic prestige, greater investments must be made in land-grant institutions and thereby American democracy.

The historiography of the Morrill Land Grant Act of 1862 has evolved only in the sense that its impact and successes are now seen as even more vital and far-reaching. In the big picture, whether through the lens of democracy or the economy, both sets of historians argue that this legislation forever changed higher education in America for the better. While there are slight differences in the way they prove their points, centennial historians by pointing to the fulfillment of the American Dream and sesquicentennial historians by the sheer number of students enrolled, the interpretation of this event has not shifted. The work of these historians point to the idea that “democracy could not survive unless every man had the opportunity to pursue any occupation to which he aspired, without restriction” (Cross). Therefore, these land-grant institutions are the paradigm of equality, democracy, and opportunity for all- the values which America hold near and dear.

Cross, Coy F. “Democracy, the West, and Land-Grant Colleges.” Precipice or Crossroads?: Where America’s Great Public Universities Stand and Where They Are Going Midway through Their Second Century. Albany: SUNY, 2012. 46-61. Print.

Fogel, Daniel Mark, and Elizabeth Malson-Huddle. Precipice or Crossroads?: Where America’s Great Public Universities Stand and Where They Are Going Midway through Their Second Century. Albany: SUNY, 2012. Print.