Hartford Board of Education held a Workshop Meeting at the Asian Studies Academy at Bellizzi School in Hartford Connecticut, on the evening of Tuesday March 4th 2014. The Workshop was held in the auditorium of the school, a panel of the Board of Education faced the audience, and across from them sat the two men giving the presentation on their study of Adult Education Feasibility. The meetings goal was not to pass any legislation but instead to have a conversation about the information found in the study and pose any questions and concerns the board had.

The meeting began with background information about the Superintendent and Board of Educations’ agreement with the CREC to manage a feasibility study of Adult Education Services. The goal was to acquire information and find potential resources for adult education. Adults (16 +) are eligible for a free education by Connecticut state law, if they are not enrolled in school. The presentation provided detailed information about the labor market, business stakeholders and partnership opportunities, resources and feasibility study recommendations. The statistics found in the study were quite eye opening, 30.2% of the adult population in Hartford (18+) has not received a high school diploma and 15.2% of the adult population does not speak English. Poverty and unemployment in Hartford are direct results of illiteracy that were found in this study. The study also found that 72% of adult education students reported that their reason for joining the program was because they wanted to obtain or maintain employment. Most adults who go through the program are not concentrated on advancing into a higher education; most of these jobs want middle-skill sector jobs. As one presenter said, “ These students need to learn the skills and fundamentals of reading and writing of 1st, 2nd and 3rd graders.” That statement truly shows why an Adult Education Mandate is needed in Hartford, where an immense amount of adults are lacking the fundamental literary skills that are crucial in life.

The Adult Education Mandate divides its students into two groups: Students who need help with basic literacy skills –these students are further away from employment through the program, and students that are closer to the possibility of being successful – who have had jobs and they have the necessary skills to keep a job. One board member raised an interesting point that was missing from the research, and that was whether or not the researchers had conducted any interviews with students who are currently in an Adult Education Program. One in the audience could tell that this made the presenters a bit uncomfortable when they replied saying that they had not conducted any interviews with students. Most individuals would find that this would be a very useful piece to incorporate into the study and the same bored member continued to pose questions that the presenters couldn’t answer. The meeting was not held to get any legislation approved but it is evident that there are some holes in the study that would have been useful information for the board members to know.

Connecticut has the largest achievement gap in the country and Hartford has an even larger achievement gap than the rest of Connecticut. With that said their needs to be major reforms and mandates in Hartford to try and close the achievement gap. Right now there are four Adult Education Mandated Programs: Elementary School Completion/ Adult Basic Education, Secondary School Completion (GED, National External Diploma Program), United States Citizenship, and English as a Second Language. After studying several education reforms I’ve learned that many reformers say that inadequate funding is preventing their reform for taking off. The researchers found that the funding for Adult Education was not nearly enough, with a statewide budget of 20 million 65% state – 35% local funding. With those funds the enrollment is only 1,323, which is only .03% of what the community needs. Inadequate funding is one of the major problems that it preventing the Adult Education Mandate from taking off and making a difference.

This board meeting attracted many middle-aged women and men whom may have been interested in the Adult Education Mandate. The arrangement of the meeting was a little off putting with the two presenters backs were faced to the audience. Based on the questions that the board members were posing it seemed that the two presenters were not as prepared as they should’ve. They were not able to answer several of the board members questions, the questions posed should have been able to be answered. Overall the meeting was informative because we had not known of the Adult Education Mandate. A mandate that would help not only individuals struggling with illiteracy and unemployment but it would also help Hartford as a whole by improving employment and closing the achievement gap. 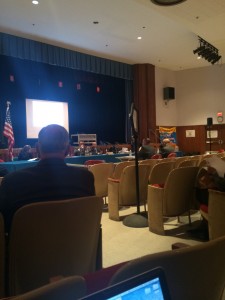