Hartford Board of Education February regular meeting took place  at 5:30pm on Tuesday, Feb.21, 2017 at Journalism and Media Magnet Academy in Hartford. In dialogue session, several issues concerning education policies in Hartford public schools were brought out by representatives from community and local organizations. It was not the first time to hear complaints for certain issues from the public.

The first group presented their concern about closure of elementary schools in North End. They stated that the closure of schools would lead to safety concern of crowded classrooms, high student-teacher ratio, as well as low teaching quality. Doctor Foster, representative from State Chapter of NAACP and the Institute for Cross-Cultural Theological Education, continued saying that the closing of schools also imply the upcoming economic challenge to the community and disturbing message to children and parents. Even with the budget deficit, he stated that “the quality and equity should be the keys in education decisions making. ” Schools that students and parents can relate to would make a difference in students’ growth.

The dialogue session also touched on how effectively using budget can make an impact of students’ life. One group suggested spending more money on repairing schools and improving after school programs. Another representatives from the community said, “We don’t want a billion of managers. We want a computer person to make sure when computer breaks, there’s person that can take care of it…We want people who can make impacts on our children’s life. ”

As new board members were assigned at the beginning of the meeting, an African-American representative, in terms of the undemocratic constitute of Hartford Board of Education, stated that “public Board of Education needs to be voted instead of appointed. Public voice needs to be heard.” He also voiced out his dissatisfaction of lack of colored teachers in Hartford public schools, a major issue that hadn’t been solved for years, “The face of teachers in classroom should reflect of who they teach.”

School safety was another concern that has been brought up for a couple of times. Community hoped for not only a cleaner and safer school environment but also a more justice learning condition for students to grow up. The board was expected to work on policies on child abuse, as one mid-aged lady said, “as mother and grandmother of Hartford students, I’ve heard complains of physical assault from other students and adults.” Voices of Women in Color also articulated that “school should be a place where children are nurtured, not negated, where they are educated, not emasculated.” Bully Referral Form itself does not meet the goal of alleviating the pain children would endure. Bully policies should be written more strictly to execute the punishment on child abuse reports. 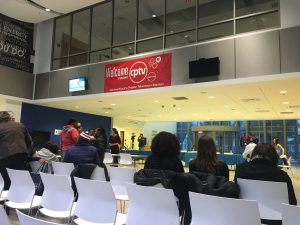