Davis Guggenheim’s Documentary, Waiting for “Superman” explores the corrupt American School system. The video explores several of the problems within the system, and tells the personal stories of several families and communities who have been impacted and disadvantaged by the broken education system. The documentary follows the students and families struggling to win in a losing education system.

The filmakes use the case of Daisy to engrain into viewers the extreme problems within the system. Daisy, an elementary student from Los Angeles, wants to go to medical college and become a surgeon. They map out her path to medical school. They show at Stevenson Middle School she will need to take eighth grade algebra, and this is supposedly where her medical journey will begin. By the time she graduates from middle school, only thirteen percent of her classmates will be proficient in math. Then the map moves across the city to Roosevelt High School, where Daisy will go to high school. The school is known to be one of the worst schools in Los Angeles. Los Angeles works in a way that you have to take a set of 16 courses, A through G, and you need to pass all the course in order to be accepted into a four year undergraduate university.

The filmmakers then switch to a group of girls racing on a playground, most likely during one of their gym classes. The way they shot this scene metaphorically presents the way the Los Angeles school system is set up in a way to create competition amongst the students. As the girls are racing the narrator gives the statistics about colleges (Guggenheim 21:30). At Roosevelt High School, only three out of hundred students will graduate with the amount of courses necessary in order to be accepted into a four-year university, and a 57 percent of the students do not graduate at all. The filmmakers intentionally have the girls running in this scene, showing that only the best will actually get to the finish line and prevail in the failing school system (the finish line is perfectly framed and held by an adult figure). The scene then abruptly cuts to a John Hopkins Professor claiming that right from the start, it is clear which students are going to graduate and which are going to not. The way this scene is shown is extremely powerful, because it sets the stage for how these “drop- out factories” work, and in the end only the lucky prevail.

The documentary is extremely successful in unveiling the problems within the public school system. But the film is biased, and does not tell the stories of the individuals who benefit from a tracking system. They manage to express the horrors of the education system, but fail to highlight to positives, which gives the video an overlying tone of hopelessness. The film mentions for a successful change to occur, an entire societal change will need to happen. They show how to system inhibits learning, but hardly no mention of how it motivates it. The film ends showing a boy managing to get in to a charter school, but even he struggled to get in the first round in the lottery. The case of this one boy is so minute in comparison to the rest of the film. There needs to be some sense of hope in order for the education system to move forward, and help benefit the youth of America. 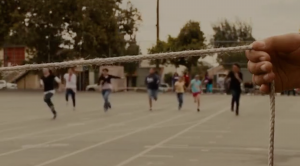