In the documentary “Waiting for Superman” author/writer Davis Guggenheim delivers a very though provoking piece on education reform. Guggenheim touched on all recent debates/controversy of school reform, whether it be school choice, lack of funded, a over complex system, teachers unions and the public school systems, and measuring/rewarding the effectiveness of teachers. However ultimately it is made clear by the end of the documentary that Guggenheim believes that true reform must start with teachers. Guggenheim begin to define the problem by criticizing teaches unions and ten year. From minute 39:35-46:00, Guggenheim defines ten year,  and the “lemon-dance”, or the system in New York commonly known as the rubber room. Inside this 6-7 minuets of the documentary the audience learns that teachers once they receive ten year; which is essentially automatic in the public school system; are close to impossible to fire. As seen in the 39:35-46:00 minute clip teachers can choose not teach, and/or  commit assault physical and sexual and are still allowed to teach. In fact in minute 46:20 there is a figure presented showing the audience just how rare it is for teachers to loose their credentials in the U.S in comparison to doctors and lawyers. 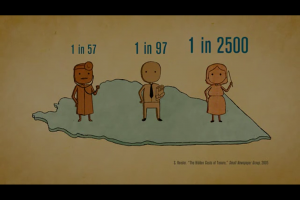 Guggenheim also introduces Michelle read the Superintendent of DC schools. In 2007 when she was appointed reads goal was to turn the system in DC on its head. Like Guggenheim she believed that bad schools were a result of bad teachers. In order to help solve this issue she began clearing house closing 23 schools and reducing the number of employees within her office. Read was public enemy #1 to both teachers unions and communities. However her drastic decisions lead to an improvement in the DC education system. The author credits read with looking to expand on such success and blames the sudden halt in reform on the system. Re could not effectively evaluate her teachers, she could not implement fundamental changes that replicated charter programs like Kipp or Harmlem Success. Read tired to solve the issue of teacher effectiveness by introducing a policy that would change tenure. She decided to offer an option teachers could choose tenure or a potential salary increase based on teacher effectiveness. Ultimately the proposal was thrown out and not voted on. After this defeat read stated that when it came to education reform it was always about the adults (referring to the teachers) not the kids (referring to the students). (Guggenheim 1:23:50-1:26:03) This statement further confirmed Guggenheims belief that what is stop school reforms are the teachers and their unions, and that reform can only happen when teachers and their union fight for it.