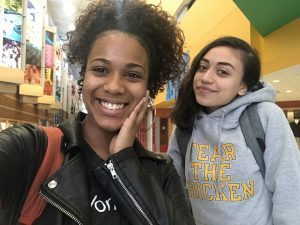 On Tuesday, February 20th, 2018 parents, school staff, and other members of the Hartford community gathered at the Sports and Medical Sciences Academy for the annual Board of Education meeting. These meetings are designed for the community to express concerns, ask questions and make requests. On the panel was the superintendent Dr. Leslie Torres-Rodriguez, along with a 8 other individuals who also work in public schools. The committee opened with a moment of silence to remember those hurt in the recent school shooting in Stoneman Douglas High School in Florida.

Coming into the meeting, we knew there would be a public hearing, but we didn’t know what to expect. Once the public hearing began, we listened to the speakers, who thanked, asked questions, and expressed their concerns to the board.

An unidentified subject mentioned that students were not receiving a proper education because teachers were not present. According to this source, who seems to be a parent, stated that teachers were on leave with pay for up to 5 months! In the meantime, students are being taught by substitutes who do not have control of the classroom. I was confused as to what school they were referring to, but as other people spoke, it all began to make sense.

Another parent spoke on behalf of her two daughters. We spoke to this parent after the meeting to get a better understanding of the issue. At first we thought the school (Batchelder) was closing, until she clarified that the school was not closing, but in fact being improved in the case that 436 students (including her daughters) would be kicked out and replaced with 200 students from the suburbs. Being a magnet school was the only way this school would receive funding from the state.

The parents and their students were anxious because they did not know what school they were being sent to or even when that will take place. They did not even know who their teachers were. She asked the board to get to know their students and their building by visiting, not just making decisions without realizing the longing impact on the children. Three separate parents expressed to the committee the treatment they experienced at the Welcome Center- a place for families to ask questions about school relocation.  Each parent mentioned that she was laughed at and not taken seriously!

The energy of the committee was definitively odd to us. Firstly, the entire board arrived 15 minutes late, which says something about how serious they take this meeting. Additionally, throughout the evening, they were writing down the concerns that were raised, but their face expressions did not seem welcoming. It seemed as though they had made their decisions. The parents felt the same energy. Someone asked, “What guarantee do we have that all of these concerns are being considered? You want us to trust you, but we have seen no change.” We empathize with the concerns and the fears that were raised in this meeting and got a better grasp on the current relationship between parents and Hartford Board of Education.

Read more on the issue here.