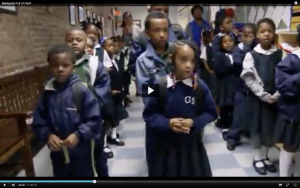 The documentary, A Backpack Full of Cash, reveals a provocative truth about charter schools and their effect on public school education. As our class sat in McCook auditorium watching the film, I heard gasps of astonishment and horror at the inequalities presented. This documentary focuses on Pennsylvania’s attempt to improve their schools. The strategy they adopted was to run schools as businesses, adding charter schools for kids to apply to. The problem with this, however, is that the application process and the weeding out of kids in these school is unequal. Charter schools were originally intended to be used as labs to be adopted by public schools (Mondale, Backpack Full of Cash,10:50). Although charter schools must be open to all students in a lottery system, some cherry-pick to get students likely to have higher test scores (Mondale, Backpack Full of Cash,16:55). Some schools require that students buy expensive uniforms out of pocket so those less fortunate cannot attend (Mondale, Backpack Full of Cash,18:29). Additionally, some use strict punishments to weed out students with disabilities or behavioral issues, such as sitting with their hands folded on top of their desks. This results in the schools not working with the children, and working instead against them (Mondale, Backpack Full of Cash,18:47). This concept had a strong reaction from those viewing the film. One student at Trinity College even saw their high school in the documentary saying, “I had to ask to pick up my pencil if I dropped it.” One key scene in the film shows students going to a Catholic school because of the voucher program. The filmmakers shot this scene as children stood in lines, looking unhappy, reciting biblical passages, showing how this type of schooling was forced upon them. How is it legal for public funds to be put towards religious schooling under the Establishment Clause of the First Amendment? And how can these voucher programs be beneficial for students if they are in toxic learning environments?