In America, in even the most poverty-stricken communities, a basic need that the government provides for is public education to children. Public education has been thought of as leveling the playing ground for children by providing them all with some baseline of education, that will allow them to apply to colleges of their choice and prepare them to enter the workforce. However, a recent trend has thrown the concept of public education and American democracy into a spiral. And that is the privatization of schooling into institutions such as charter schools. Charter schools essentially are managed by private companies, however paid for by local tax dollars. Although it may not sound like that large of an issue, the fact is that these charter schools actually deprive traditional public schools from their funding, lead to shut-downs, and overall severely hinder the education that these children are receiving. In Sarah Mondale’s Backpack Full of Cash, the director explores these devastating effects and conveys them effectively into her documentary. 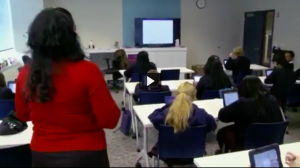 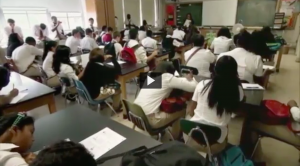 The reason that these two images are so important is that show the audience the toll that charters have on traditional public schools. In addition to charters receiving public funding, money also pours in from wealthy investors. As such, it’s no doubt that they are able to provide their students with digital labs, the arts, varieties of physical education, and iPads in the classroom to assist with their learning. In the images themselves we see a beautiful white classroom with a smaller student to teacher ratio and pupils who are actively involved in their education. Conversely, film-makers included a classroom at a traditional public schools where children are not even guaranteed a place to sit when they come to class. One would expect that charter school students would outperform public school students, considering the additional resources they are provided with, however this is definitely not the case. One could make the argument that if test scores are not different between the two different types of schools, that the system is working perfectly fine. However, the fact is that creativity is being completely crushed at traditional public schools, where students don’t even have a music teacher for all the instruments and gear that remains in the school as a remnant of the times before charters. Additionally, the experience that students have with traditional public schools in areas of extreme poverty likely negatively impacts their own self perception. Why should they receive the worst that public education has to offer just because of their socio economic condition? Why is it ethical for students to be ripped out of schools they have come to love and instead have to travel far distances to get to new schools? In my personal opinion, it’s simply not. Additionally, parents would clearly want their students to receive the best education they can, and if they look at these two images it’s clear where they would want to send their children. However, a plethora of barriers also exist for enrollment into charters where privileged children are essentially “cherry-picked” to attend. This therefore poses the question, is having charter schools even just to students? As clearly the playing field is not equal for students at either school.

Monroe clearly makes multiple strong arguments in her documentary, and uses a plethora of student anecdotes, figure-head speech, and statistics to solidify her claims. In my education reform class, the documentary left a good majority of students in a state of disbelief that young children are having to bear the effects of privatization. A number of us expressed a desire to somehow change the system, and were proud when individuals in the movie moved upward to help with reform for traditional public schools. However, it was upsetting to know that other movie-watchers, including some parents and older individuals in the audience, were not as moved by the documentary. They seemed to express more hesitancy toward the concept of changing a system that is already in motion. I agree that their may have been some minor holes in the movie that causes this hesitancy. For instance, including information from a smaller geographical area (i.e, only charter schools in the states of Philadelphia and New Orleans) may have lead certain audience members to feeling as if though this isn’t as large of a problem as it appears. Personally, coming from a very privileged neighborhood and having attended traditional public schools in that community, I never had to face the issues that public school students in the movie did. Although the documentary did include one city where this relationship isn’t as parasitic, it isn’t a large focus or point of discussion. As such, I would find it really interesting as to what the other side of the argument holds. Regardless, student’s displeasure toward the system stemmed deeply from the fact that even if students all over America are not exposed to such dire public school conditions, there are students that are. And we feel a sense of responsibility of speaking out for students who live in poverty, have mental, learning, or behavioral problems, or come from families of immigrants.