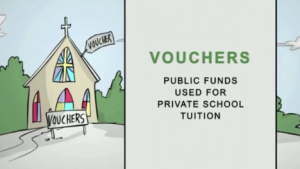 which is kind of ironic because the school is funded by public school money.

In my opinion, an important, or at least revealing, scene was when statistics of the different percentages of school groups were shown. This portion of the video showed groups of people such as English Language Learners, children with Autism, students involved with the 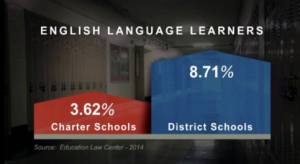 juvenile court system, etc. There was a much greater percentage of students in every one of these groups attending traditional public schools, not charter schools. This reveals that charter schools are not fulfilling their initial goal towards being inclusive to all students, 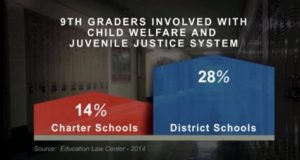 especially students who need a lot of help. Instead, they manipulate the entrance system to cherry-pick students who will get the highest test scores. 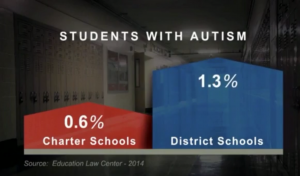 I think it is intentional that Mondale modeled the video in this way. She has scenes where she focuses on student art on a chain-link fence. 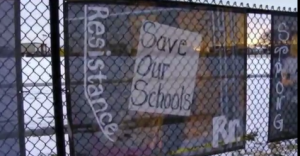 She has interviews with parents and children upset about the schools closing because of funding. She inserts news footage and information about charter schools being viewed as a good thing right after or before a tragic event happened to a public school to appeal to the viewer’s pathos. Mondale is extremely strategic with the slow zoom-ins when the moment is sentimental, and this strengthens her interpretation that charter schools are essentially redirecting traditional public schools money into an institution that has a partial negative impact on the community that the money was originally intended for. Overall, many of the key scenes help to reveals the way that Mondale views the public-school budgeting issues and policies/political leaders that she is against. (Mondale, Backpack Full on Cash, 0:27)