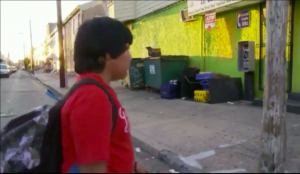 The scene with the kid young kid walking to school is an important scene. The camera follows the young kid to school, a 30 minute walk by himself. When I think of a long commute I think of an older kid, potentially a high school kid taking a bus to school, but this was different. This is a young kid, who walks to school every day on his own. His mother and sister both work, so they are unable to accompany him to school. As he explains the why his mom or sister are unable to take him, he doesn’t complain, he just states it how it is. He doesn’t have another option. While the scene only shows him walking outside by himself, you know that most likely he woke up and got ready on his own to get to school.

He is responsible for getting himself to school.

Schools are shut down, because there is not enough money. Students are relocated into public schools outside their neighborhood, because there is not enough money, Privatization of school sounds like a good idea, and everyone would rather go into a charter school that had more resources, yet not everyone had the privilege to attend one. When people start focusing on the privatization of schools, students from low-income background are left unseen. 30 minutes is a long time to walk to school by yourself. Yes, the kid might be responsible, but what about other children who might be younger or live in neighborhood that are unwalkable.