Research Question: When did drug education first become part of our schools’ curriculums and how have changes in American culture impacted these drug education programs?

Why I think this question should be researched: When people look back on America’s cultural history, they often consider the many wars America has participated in, the Great Depression, the iconic 50s housewife, Hollywood and Marilyn Monroe, the Space Race, Woodstock, McCarthyism, the internet technology boom of the ’90s, and the revolutionary work of Steve Jobs. While all of these are important events in our history, people often fail to consider another large aspect of American culture: the struggle we continue to have even to this day over illegal drugs and their abuse, commonly referred to as the “war on drugs.” These two aspects of American life are much more closely related than one would believe. I am curious to know not only how these historical events led to the mainstream drug use, but how American education became a platform for anti-drug rhetoric for the “war against drugs.” When exactly did recreational drug usage become an epidemic severe enough that educators felt the need to include such anti-drug rhetoric in their students’ required curricula? Additionally, how have these efforts changed with time as different cultural factors and drugs have emerged into the mainstream culture? Was there a noticeable shift in focus around these educational programs when the crack cocaine epidemic hit America in the mid-80s through early ’90s, etc. In researching this question, I feel that one can learn more not only about the history of American drug culture but also about the educational politics and the resulting relationship between them. This research topic is also extremely significant as the misuse of drugs is not only a problem of the past, but one that continues to haunt American youth in the present.

To first begin the research for this paper, I wanted to first understand the history behind America’s pattern of drug abuse so that I might be able to pinpoint certain epidemics that might have resulted in a change in the educational methods regarding drug abuse. I began with the website for the government’s Drug Enforcement Administration (D.E.A.) which was created in 1973 and enforces controlled substance laws and regulations. There, I found useful fact sheets on different drugs that have risen and fallen in popularity throughout history such as marijuana/cannabis, cocaine, LSD, ecstasy/MDMA, heroin, and many other which have arguably risen to epidemic levels of abuse in the recent decades. Additionally, I learned from the website that the D.E.A. has a museum, whose site I also visited.

The museum’s website was also helpful for my understanding the history behind the rise of modern drug abuse.

The museum was also helpful for me to understand the rise of modern drug abuse. On the site there are also virtual exhibits, which proved useful in further understanding how small cultural changes, such as how a change in music style might influence drug use and later, drug awareness education. The museum website provides graphics, timelines, and other resources that will be helpful in fleshing out the story and link between history, drug culture, and educational practices.

Another thing I did in researching this topic was to input the phrase “drug education” into Google’s Ngram viewer, to see when people first started using this phrase regularly. The Google service suggested that the phrase wasn’t commonly used until the ’60s, and essentially peaked at around 1977. Obviously, the term “drug education” is still commonly used, but has potentially taken a hit as other terms came into fruition such as the Gates D.A.R.E. program of the 1980s.

The next thing I researched was the D.A.R.E. program itself. As I went to a parochial institution in New York, I am actually unfamiliar with this program. I first asked a friend of mine who grew up in Massachusetts about it, and then chose to Wikipedia it, for an overall summary. From the Wikipedia page alone I was able to glean interesting facts about the initiative such as the fact that it has been implemented into 75% of the nations school districts. From this page, I was able to also see potential resources related to the topic of the Drug Abuse Resistance Education program that is so popular, even thirty years after its inception.

HARTFORD, CT– On Friday morning March 7, 2014, the Appropriations Committee of the Connecticut General Assemble held a public hearing to discuss the potential amendments and concerns for Bill S.B. No. 340, a relatively recent Act raised concerning the further implementation and expansion of two-generational school readiness plans throughout the state of Connecticut. The Bill proposes an active plan to promote “long-term learning and economic success for low income families by addressing intergenerational barriers to school readiness and workforce readiness,” which would hopefully lead to the closing of the gap between the rich and poor in terms of income and education within the state.

This meeting was chiefly overseen by Appropriations Committee Co-Chairs Toni E. Walker and Beth Bye. Other members of the Committee present included: Republican Senator Robert Kane, House Republican Melissa Ziobron, Democratic Frank Nicastro, Robert Sampson, and State Representative Gail Lavielle. Presenting their proposed changes and concerns for Bill S.B. No. 340 were Commissioner Sharon Palmer from the Connecticut Department of Labor, Roderick Bremby from the Department of Social Services, Executive Director of the Office of Early Childhood Myra Jones Taylor, Theresa Younger from the Commission on the Status of Women, and Elaine Zimmerman, the Executive Director at the Connecticut Commission on Children.

First to present was Commissioner Sharon Palmer, from the Connecticut Department of Labor. While she agreed with and was pleased by the general concepts of the Bill, Palmer cited a need for further investment in job training, adult education, subsidized employment, transportation, and childcare. According to statistics collected by her department, 63% saw lack of childcare as a “significant barrier” for employment and 67% cited transportation difficulties limiting their employability. These statistics, which surprised Appropriations Committee Co-Chair Beth Bye with their severity are cited by Palmer as being the two largest factors preventing disadvantaged Connecticut residents from holding a steady job.

Second to present was Commissioner Bremby, from the Department of Social Services. Like Palmer, Bremby too cited a lack of access to affordable childcare for working parents or parents seeking adult education as a primary barrier in equalizing the gap between income and education level in Connecticut. Bremby also called for better coordination between the different providers of care and services. Too often, he claimed, individuals are forced to leave their adult education classes in order to meet with their social worker, which has a detrimental effect on their education, and, if this happens often enough, their ability to advance both in their education and in their level of employability.

Next to take the podium was Theresa Younger. As a representative from the Commission on the Status of Women, her approach to Bill S.B. No. 340 was more focused on gender parity rather than solely on education and economic improvements, though these issues were still relevant to her department. According to Younger, this two-pronged approach to educational and economic reform set forth in the Act proposed would help to bring families out of poverty, rather than just the parents or children. To Younger, further investment in adult education and quality childcare are insurmountably important to increasing the number of parents who can in fact work on a regular basis or go to school to further their employment opportunities so that they might stand a change to earn a somewhat sustainable income. The focus and additional funding on and for quality childcare would also help prepare the next generation, the children, for school.

Next to speak was Myra Jones Taylor, from the relatively new Office of Early Childhood. Taylor, in her testimony, highlighted a potential model already in place called the Even Start program, which operated using the two-generational approach proposed in Bill S.B. No. 340 to successful outcomes. According to the organization’s statistics, 35% or fewer had not made it past high school, 56% had had some high school, 86% were either at or below the state’s poverty level. The 40% of the children of these individuals were infants, and 52% were between the ages of three and six. Taylor notes that, after participating in the Even Start program, 48% had completed high school, and 82% of the students in the program were meeting grade proficiency standards. Despite these marked improvements, federal funding for the program was cut, and Taylor’s testimony suggested that the new Bill put forth highlight the Even Start program, and perhaps increase funding for it and programs like it to expand throughout Connecticut.

Last to speak on the proposed bill was Elaine Zimmerman, from the Connecticut Commission on Children. It was her belief that a two-pronged approach would be particularly beneficial to the children as “adults are more involved in their child’s learning if they are learning too.” This is to say that, by opening up opportunities for adult education and employment, one could also foster a sense of increased involvement from the parents in their children’s schooling. In order for this to work, however, Zimmerman stressed that educators teaching adults had to be better trained for addressing the needs of young adults, who were easily discouraged from furthering their education. By assuring their involvement in their education, Zimmerman argued, their children would also benefit. In her testimony, Zimmerman noted the reality that the state does not have unlimited funds, and rather highlighted the idea that funds be re-appropriated from less impactful uses to her proposed addition to the Bill.

As Co-Chairs Walker and Bye heard these different opinions on the Bill, it became more and more evident how necessary such a refocusing of government funds was needed in order to aid the struggling families of Connecticut. Only time can tell if the propositions made by the speakers will be adopted in the final passage of the Bill, which is suspected to in the relatively near future. 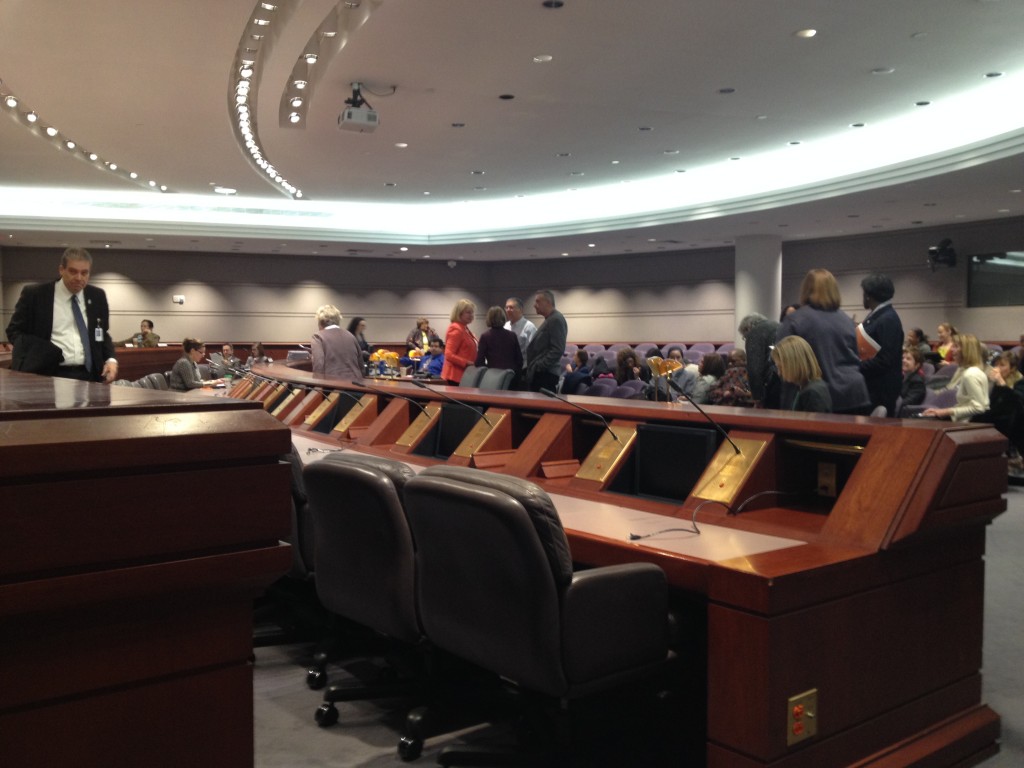 By taking this course I seek to further understand the way in which American history and politics that have shaped the way we view education today. Having a great interest in socioeconomics and public policy, it is my hope that this course will further my knowledge of both, through the lens of American education.