Senior Grant Sorensen ’19 is a student-athlete on Trinity’s campus who has excelled both academically and athletically. Hailing from Moore,OK, Grant is a co-captain on the wrestling team and majored in English literature. Want to get to know Grant even better before he embarks on his life after Trin? I sat down with Grant to learn a little more about his academic and athletic pursuits, as well as his aspirations for the future. 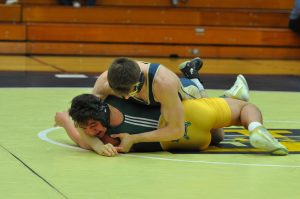 Grant came to Trin from a private high school in Oklahoma City where he wrestled and figured out early on that in the future he would like to continue his wrestling career. He was also interested in going to an academically prestigious and challenging school, so, when Trinity College made it onto his list of prospective schools, his college counselor also highly recommended looking into Trinity because she and her husband were graduates of NESCAC schools.

he said. While in season, Grant brings passion and attitude and trains accordingly—equal amounts of intensity and competitive energy. His dedication and strong work ethic to his team and to his academics has awarded him three times Academic All-American. He was also a 2018 NCAA qualifier, and two-time Regional place winner. Most recently, Grant was honored as the male recipient of the Robert R. Bartlett Award, given annually by the athletic department during Trin’s annual Senior Athletic Awards Ceremony.

It hasn’t always been easy maintaining a healthy balance, as Grant explained,

A valuable piece of advice that Trinity’s head wrestling coach, Marques Gales, gave Grant directly relates to what he has been able to accomplish as a student-athlete, “Control what you can: 1.) Attitude 2.) Effort.” 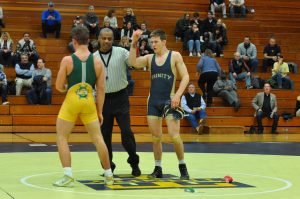 Outside of the normal work/life balance, Grant’s biggest challenge came freshman year, when he came to Trin fresh off of a knee injury, and then again at the end of this past year, when he experienced another knee injury. It wasn’t ideal, but along with his coaches, they made the most educated decisions they could at the time and did the best they could given the situation.

Looking towards the future, he said,

wrestling has shaped who I am and will influence who I am going to be. I find that the accountability, pressure, and the feelings of both pain and happiness are unique in wrestling compared to other general athletic experiences. 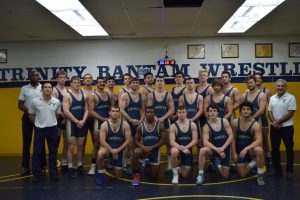 His biggest piece of advice for incoming freshmen student-athletes is to have fun, grow close to your teammates despite minor differences, and the job search comes faster than you might think!

“Grant has been a pleasure to coach for the past four years and has been a model student-athlete here at Trinity,” coach Gales. “He is extremely dedicated; a great role model for his peers, and has also been very active in the community. He is the type of person to make everyone around him a greater version of themselves and he will continue to do great things in life after Trinity.”

And, as Grant reflects on those four years in college, and as he prepares for graduation, his proudest moment has been being able to see some of his teammates have their greatest performances at the end of their careers. As wrestling team captain, he has found that he has developed a strong ability to talk to and connect with teammates and coaches. He now better understands the elements, which are essential to creating a successful team. Most importantly, as a captain and a teammate,

I have taken away newfound brothers who will continually be some of my closest friends for the rest of my life.