The Reality of Racialized Tracking at Magnet Schools 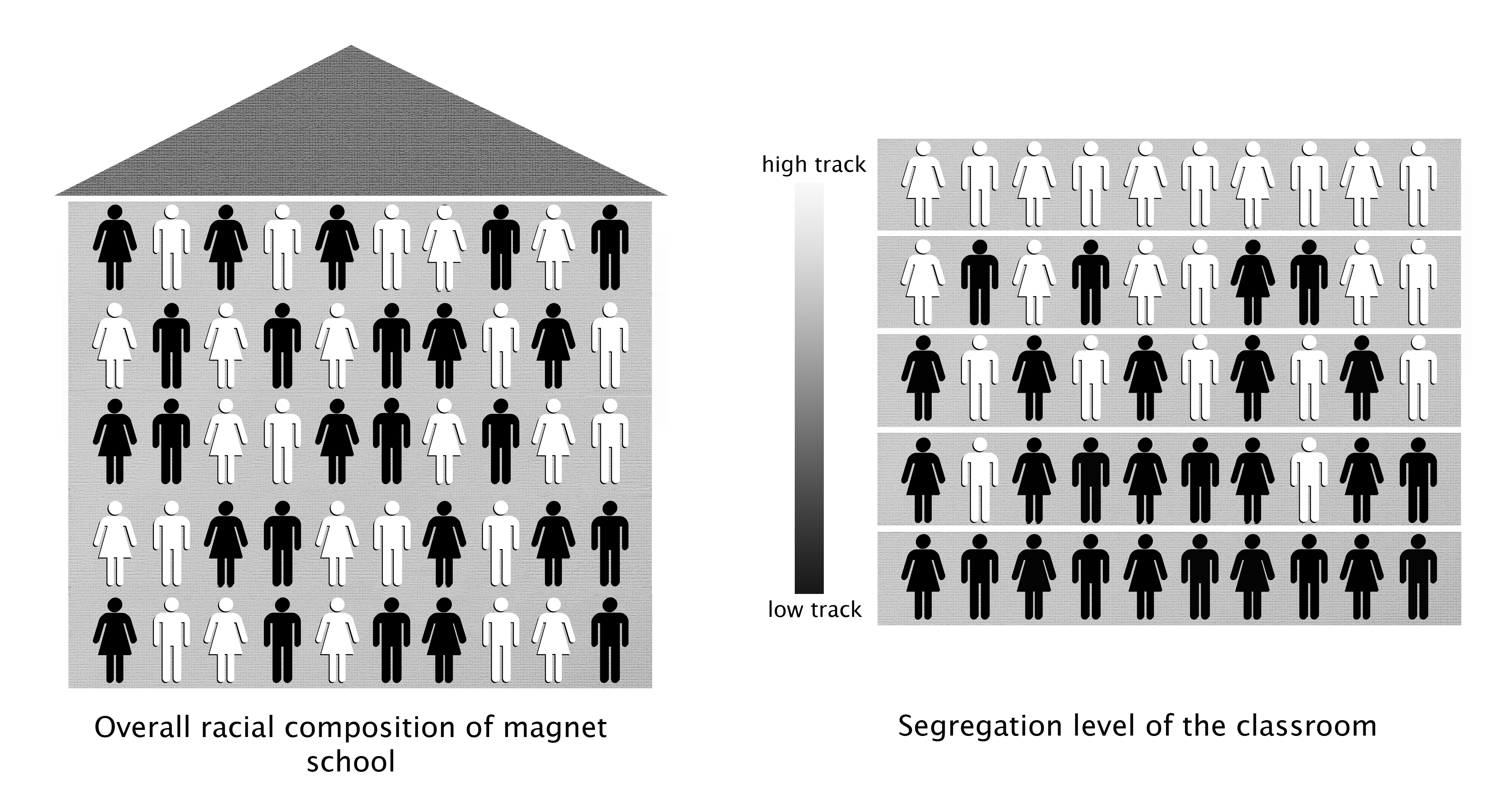 Over the past decades, politicians, civil rights leaders, and community organizers have worked to give every Hartford child the opportunity to attend a racially and socioeconomically integrated school. Sheff v. O’Neill is a landmark civil rights lawsuit filed by Elizabeth Horton Sheff and other parents against then-Governor William O’Neill in 1989, claiming that the severe racial and socioeconomic isolation of Hartford school children violated the state’s constitution. However, this situation is not unique to Hartford. The Sheff case has implications for the dynamic between urban and suburban disparities nationally. The de facto segregation that the lawyers argue is to blame for the poor educational opportunities of Hartford students is, in fact, pervasive in nearly every city nationwide. All students stand to benefit from more racially integrated schools.

Sheff plaintiffs advocated for the State of Connecticut to uphold the constitutional rights of children in Hartford schools to equal opportunity. They argued that the Connecticut’s districting system based upon city and suburban boundary lines led to racially segregated schools. 3 “Hartford Public Schools’ population consisted of 91 percent minority students, surrounded by suburban district comprised of 88 percent white students.” 4 Although in 1996, the State Supreme Court ruled in favor of Sheff plaintiffs, “the Court did not specify a goal, remedy, or timetable to resolve the problem, stating that this responsibility belonged to the legislative and executive branches.” 5

In 2003, the Sheff v. O’Neill reached to an agreement, to provide at least 30 percent of public school minority students with an educational experience with reduced isolation by using interdistrict magnet schools, the Open Choice program, and interdistrict cooperative programs. 3 Moreover, the agreement required the state to open and maintain two new interdistrict magnet schools in Hartford per year. Even though the state was pressured to take actions to alleviate the violation, this goal is not directly enforceable. Four years later, the goal was only met with approximately 10% of students attending less racially isolated schools. 5

Since the state failed to make significant progress towards the goal (Sheff I), the plaintiffs returned to Court several times and lead a discussion on a second settlement. The Sheff plaintiffs claimed that the State was not doing enough to fill new magnet schools to capacity, declaring the state’s efforts to integrate Hartford students inadequate. Thus, the plaintiffs saw very little progress made by the state. On the other hand, the State “responds that it has complied with the settlement by opening two magnet schools per year, while phasing in grade levels as planned.” 8 The State managed to create 22 interdistrict magnet schools and enrolled 1,000 minority Hartford children in suburban schools. Both parties expressed common interest in increasing the racial, ethnic, and economic integration of Hartford Public School students.

Under the current settlement agreement (Sheff II), the plaintiffs requested more magnets schools to be built and increasing the number of seats for Hartford children in suburban public schools. In addition, the state and the plaintiffs agreed to achieve at least 35% of Hartford minority children have access to racially integrated schools by 2010-11 and 41% by 2013.

Check out the original 1989 complaint here!

What are magnet schools? What is its role in public education?

Higher socioeconomic diversity and more specialized curriculum are benefits of magnet schools. There are, however, multiple drawbacks. Magnet schools are not neighborhood schools. Students sometime travel considerable distances to their magnet schools. If the distance along isn’t enough, the community dynamic present at a magnet school can be different than that at a zoned neighborhood school. This is not to imply it is worse, rather only that it is different. Also, unlike regular public schools, admission to magnet school is not guaranteed. Admission is based on academic merit or lottery. For example, in Hartford where admission is lottery based, a parent could apply to several inter-district magnet school but be accepted to none. Because of widespread popularity certain schools have large numbers of applications limiting acceptance to only a lucky few. Magnet schools are not without their faults and are not guaranteed to successfully create desegregation.

Jeanie Oakes argues that there is a strong relationship between race or ethnicity and tracking as well as indirectly related to other socioeconomic characteristics. Her research found “the predominant pattern in racial composition, with disproportionately large percentages of white students in high-track classes and of nonwhite students in low-track classes.” 9 Her studies illustrate “classroom segregation does exist in many schools that are racially balanced at the building level…and evidence suggests that magnet schools often operate racially imbalanced classes”. 1 Minority students are over-enrolled in basic or remedial classes because of racialized tracking policies.

“The two factors repeatedly identified as causing classroom segregation within otherwise desegregated buildings are (1) methods of assigning students to academic programs, such as tracking, ability grouping, and remedial pull-out programs and (2) disciplinary practices that discriminate against minority students”. 1 There are differences in the quality of the educational experiences in different track levels. Disproportionately large percentages of poor and minority students are more likely to be placed in low-track classes. They benefit least from schooling and receive a poorer quality of educational experience in classrooms. On the other hand, affluent white middle and upper class students are more likely to be placed in the high-track classes and receive better quality instructions. High track classes prepare students for success in college academic work, while the low-track classes prepare students low occupational level jobs. As a result of students in different track levels being exposed to different material, nonwhite students do not have the same opportunities to learn the same content as the white students. This creates inequality in the distribution of knowledge.

We propose schools to practice detracking in the classrooms. Detracking is a response to remedy the inequalities caused by tracking. We are not arguing that tracking itself is the problem. Rather, we argue the problem is the failure to effectively address the strong correlation between race and academic track in school desegregation policies. “In detracked setting, educators intentionally group student heterogeneously, balancing groups in terms of race, gender, and academic ability.” 12 When classes are detracked, students from various backgrounds are brought together. As a result, it breaks down socioeconomic barriers and allows students to benefit from one another academically. Low-track students are given the opportunities to develop academic skills, while white students’ preconceptions and stereotypes about minority students’ abilities are diminished. To provide a better education for all, classes should be detracked. Consequently, detracking is a reform that would help lessen the academic disparities among low-income and minority students.

What We Know and What We Don’t

Each year, the State of Connecticut publishes strategic district and individual school profiles. Each district and every public K-12 school is included. Click here to see a sample school profile: HMMS Strategic School Profile (2009-2010). This information is all publically available on the CT State Department of Education. The school profiles provide a wealth of specific information, including racial demographics, testing performance, total hours of instruction time, along with many other quality indicators. However, references to tracking are absent from the report. Much of this is following No Child Left Behind (NCLB) regulations that require enrollment and school testing data be disaggregated according to gender, major racial and ethnic groups, disability, English proficiency, and economic status. NCLB addresses the fact that historically, the academic progress of limited English proficient students and certain minority groups was inadequate. Because performance data was only assessed previously at the school-wide level, variations among subgroups remained hidden (1). Although this stipulation of NCLB has had significant impact on awareness of educational disparities, it only requires that schools disaggregate testing data. It does not require schools address other forms of racial disparities within the school environment, such as tracking.

The Sheff v. O’Neill settlement set guidelines for school desegregation. The case legally defined desegregation, which now defined as no more that 75% minority students. However, even when combined with the previously discussed NCLB testing standards this percentage enrollment does not sufficiently address tracking patterns within school. Schools do not officially report racial demographics of the different academic tracks. Although through ethnographic data and other academic research it is recognized that minority students are disproportionally placed in low-track classes, there is minimal state or district wide data on this subject. Searching through the CT Department of Education website, individual district or school pages, and CEDaR (the CT government database for education statistics and research) yields no specific information. While a school may be considered desegregated and report testing differences among historically under performing subgroups, we have no information regarding racial demographics within the classrooms. Put simply, we have no widespread statistical data regarding school tracking.

The Sheff plaintiff measures its goal of integrated schools by having the state meet at least 30% of Hartford minority public students educated in racially integrated settings, which is defined as having a student population that is no more than 75% minority. According to the case, “reduced-isolation setting refers to an educational setting with reduced racial, ethnic, and economic isolation”. Schools “provide a reduced-isolation setting if its enrollment is such that the percentage of minority students in the school does not exceed the Desegregation Standard.” 13 Simply, schools can be labeled reduced isolation settings without acknowledging academic disparities within the school. As long as the school meets the enrollment percentage the school is considered desegregated. However, how can true desegregation and equal opportunity be defined using only a simple numerical standard?

We believe that measuring desegregation only at the overall school level is ineffective because it does not provide insight into intra-school policies or practices. Minority students enrolled in a magnet school meeting Sheff desegregation guidelines may in fact be racially isolated within the school because of tracking practices. It is not enough to just evaluate the level of desegregation based on the calculated percentage of Hartford minority students who were enrolled in magnet schools. We argue that court’s definition of desegregation should apply to classrooms as well as schools. In order to analyze effectiveness of desegregation, there needs to data on classroom racial balance. “Nevertheless, because academics have failed to evaluate desegregation plans in terms of their success in eliminating within-school segregation, magnet schools have been deemed effective desegregation tools”. 1 Although we realize that school desegregation is an enormously complex and highly politicized issue, we believe that more can be done with respect to how desegregation is defined at the policy level. Future legislative goals should incorporate the racial composition of the classrooms to more fully ensure that students are receiving an integrated education. Requiring racially integrated classrooms is necessary to bridge the educational disparities between cities and suburbs.

If you are interested in more information about the Sheff Movement or magnet schools, we encourage you to visit the links below:

Pornpat Pootinath  is a sophomore at Trinity College, CT majoring in Educational Studies and Sociology. She serves as an academic facilitator at Hartford Magnet Trinity College Academy and teaches ninth-grade mathematics. On campus, she is a resident assistant, teaching assistant, public relations of AASA, and an active member of Stop the Raids.

Nathan Walsh is a senior Educational Studies Major at Trinity College. His academic interests include urban education reform and the role of public education as a tool for social change.

One thought on “Desegregated Schools with Segregated Classrooms: The Reality of Racialized Tracking at Magnet Schools”