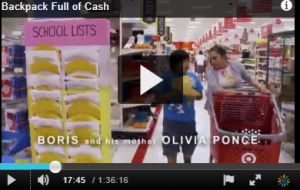 Immediately following the scene discussing South Philadelphia High School, this part of the film begins a more in-depth analysis of charter schools. I found this part of the film to be of particular importance because it begins the documentation of real-life examples of barriers students and families face when trying to attend a charter school. Often touted as another type of public school open to everyone, charters still find subtle ways to prevent large populations of students from enrolling in them. This screenshot begins the first of these examples. Here, a Mexican-American mother is explaining the language barrier she has with her sons school. As a Spanish-speaking individual, she expresses difficulty in advocating for his education. She states herself that “[she] can’t fill out all the paperwork to put him in charter school” (17:57). Next, the film talks about the costs of school uniforms, and how those prevent low-income and poor students from attending charters. A young female student was talking about the high price of her uniform, and said that because of it, “charter school isn’t really an option for me” (18:26). The scene goes on to describe the intense disciplinary rules that guide the classrooms, often punishing students at higher rates than traditional schools. In charter networks like Success Academy and Mastery, students are held to standards akin to military academies, leading to more suspensions and expulsions. So while charter schools are “public” schools theoretically, they are accessible almost exclusively to English- speaking families who can afford the expenses and who are willing and able to follow their strict guidelines. In order to convey these stories in the powerful way that the film does, it was necessary to gain access to students and families experiencing charter schools. This most likely required their consent and all necessary documentation. They also added screenshots of various articles exposing charter school policies and experiences. Moreover, while I understand that the film is suppose to offer a critique to the charter school movement, I personally feel like their are many success stories being left out of the conversation. The film descibes charter schools as performing on par with traditional schools, but my school actually performed better than traditional public schools.