adiant Cool” has the makings of a gripping noir thriller: a missing body, a tough-talking female sleuth and a mustachioed Russian agent mixed up in a shadowy plot to take over the world. But the novel, by Dan Lloyd, a neurophilosopher at Trinity College in Hartford, is also a serious work of scholarship, the unlikely vehicle for an abstruse new theory of consciousness.

Lured in by the sinister atmospherics (a possible murder victim turns up on Page 1) and clipped, Sam Spade narration (“He was a fool and a moron, but I never wanted to see him dead”), readers soon find themselves enrolled in a heady tutorial on Husserl, phenomenology, neural networks and multidimensional scaling.

Mr. Lloyd says that embedding his theory of consciousness in a novel was essential for making his scholarly case. “I’m trying to show the way that consciousness is personal and idiosyncratic and especially bound up with time,” he said. “If you put those factors together, you end up with a novel as a way to express those ideas.” (“Radiant Cool,” which will be published by M.I.T. Press in December, has a 100-page appendix explaining the theory in technical terms, in case scholars fail to grasp the literary version.)

Of course, Mr. Lloyd is not alone in using literary techniques to convey difficult scientific ideas. Michael Frayn’s play “Copenhagen” (1998) made high drama of atomic physics, just as David Auburn’s”Proof”(2000) and Tom Stoppard’s “Arcadia” (1993) did of advanced mathematics. At the Sundance Film Festival this year”Dopamine,”a romantic comedy about computer programmers and artificial intelligence, won the Alfred P. Sloan Foundation’s first $20,000 prize for the best feature film about science and technology. And this month Norton inaugurates Great Discoveries, a series about scientific breakthroughs, with two books, including the technical but stylish “Everything and More: A Compact History of Infinity” by the novelist David Foster Wallace.

“I think there is a growing trend,” said Alan P. Lightman, a former astrophysicist who is now an adjunct professor of humanities at M.I.T. and, as the author of “Einstein’s Dreams” (1993), a best-selling novel about relativity, a pioneer in what he called “this recent stuff by people really using fictional devices to write about science in very imaginative ways.”

Take “Faster Than the Speed of Light” by João Magueijo, a young theoretical physicist at Imperial College in London. The book caused a sensation on both sides of the Atlantic last winter, less because of the author’s heretical claim (so far untestable) that the speed of light may not always be constant than his brash, tell-all style (including tales of all-night beach raves, wanton drunkenness and nasty academic intrigue) that made the book a first for a popular physics primer: a delicious page-turner.

“This is almost certainly the first time in print that anyone has referred to Einstein as a `lucky bastard,’ ” marveled the reviewer for The Daily Telegraph in London.

Mr. Magueijo’s book aspired to the novelistic, but other scientists have gone further down the literary path. In addition to Mr. Lloyd’s novel, this fall M.I.T. Press is publishing “Turing (A Novel about Computation)” by Christos H. Papadimitriou, a professor of computer science at the University of California at Berkeley. In May, Joseph Henry Press published “The One True Platonic Heaven,” a novel about quantum logic featuring Einstein, Kurt Gödel, J. Robert Oppenheimer and John von Neumann, by John L. Casti, a mathematician affiliated with the Sante Fe Institute and the Technical University in Vienna.

The book is Mr. Casti’s second experiment in what he calls “scientific fiction” after “The Cambridge Quintet” (1998), about an imaginary dinner party attended by five real-life scientists including the physicist Erwin Schrödinger. There is also “Properties of Light” (2000), a critically acclaimed romance about quantum mechanics by Rebecca Goldstein, a professor of philosophy at Trinity College.

Mr. Lightman, perhaps the best known author of the lot, argues that “what’s happening now is somewhat of a return to a more holistic approach to human inquiry.”

For most of the last century, such an idea would have been unthinkable. The arts and the sciences were seen as separate countries with hostile borders and few foreign tourists. In the influential formulation of the physicist C. P. Snow, they were “two cultures.” And between them, he argued in a famous 1959 lecture on the subject, lay “a gulf of mutual incomprehension — sometimes (particularly among the young) hostility and dislike, but most of all lack of understanding.”

The schism is also a peculiarly modern phenomenon. To the ancient Greeks, the distinctions between literature and science remained extremely fuzzy. Empedocles of Acragas (circa 495-435 B.C.), for example, recorded his speculations about the universe in a poem, “On Nature,” while Heraclitus (circa 535-475 B.C.) packed his into proverblike epigrams.

“There was not a sense of specialization,” said Daniel Mendelsohn, an author and classicist who is writing a book about Archimedes for Norton’s Great Discovery series. “The earliest works that we would think of as science were written in verse.”

By the early modern period, however, the sciences and the humanities had begun to take their distinctive — oppositional — modern forms. There were occasional exceptions. Mr. Lightman cites “Conversations on the Plurality of Worlds,” a work of scientific fiction from 1686 by Bernard le Bovier de Fontenelle, a nephew of Corneille and a secretary at the French Royal Academy of Sciences, as a rare example of disciplinary boundary blurring. In it Fontenelle depicts a philosopher and a marquise in a moonlit garden, deep in flirtatious conversation as he explains the latest scientific breakthrough: the Copernican solar system.

The 19th century also produced at least one notable work of scientific fiction: “Flatland” (1884) by Edwin A. Abbott, a British clergyman, Shakespeare scholar and math aficionado. A whimsical lesson in basic geometry — and a witty sendup of repressive, caste-bound Victorian England — the book relates the adventures of A. Square, an unusually reflective inhabitant of the strictly two-dimensional Flatland who accidentally discovers Lineland (one dimension), Spaceland (three dimensions) and Pointland (no dimensions). He also muses on the likelihood of a fourth dimension but is unable to find a world that embodies it.

In the 1940’s the physicist George Gamow, a founder of the Big Bang theory, made forays into literary science, publishing two patiently instructive books about relativity and the expanding universe featuring a bank clerk and amateur science enthusiast named C. G. H. Tompkins. (His initials stood for the three fundamental physical constants: the velocity of light, c; the gravitational constant G; and the quantum constant, h.) But for the most part 20th-century scientists regarded writing for the public — let alone writing with imaginative flourishes — as vulgar and an abdication of professional responsibility.

Then, with a rush of ink beginning in the late 1960’s, that attitude changed. Prominent scientists including Stephen Jay Gould, Lewis Thomas, Steven Weinberg, Carl Sagan and James D. Watson began to publish essays and books aimed at lay audiences. Many of their writings were extremely influential, and some of the books, like Mr. Watson’s”Double Helix”became best sellers.

“There had been a strong taboo against scientists writing for the general public,” Mr. Lightman said. “These people, who were all very respected scientists, greatly weakened the taboo. They legitimized the activity and started a new wave of science popularizations.”

This first wave of popular science writing, Mr. Lightman said, paved the way for today’s provocative twist. When he published “Einstein’s Dream” 10 years ago, Mr. Lightman was one of few experimenting with the genre. (Carl Djerassi, the Stanford chemistry professor who synthesized the first birth-control pill was another.) Now, as the field becomes more crowded, the entries are becoming more diverse as well. And while they may not all be as sophisticated as Mr. Lightman’s highly regarded novel, they are proof that scientists are thinking about their fields — and how to communicate their findings — in increasingly creative ways.

Mr. Papadimitriou, the Berkeley computer scientist, is already at work on his second venture in scientific fiction. “Are you ready for this?” he asked eagerly. “It’s called `Logicomix.’ It’s a graphic novel and mathematical biography. It traces the story of the development of logic throughout the 19th and 20th centuries and how it led to computers. It’s an incredibly sad human story because most of the people involved ended up insane.” 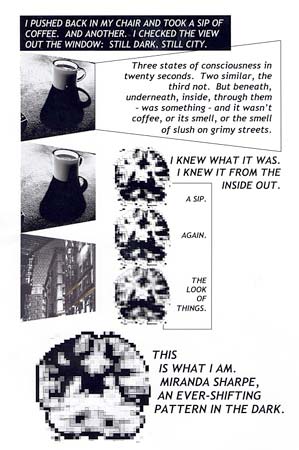 An illustration from Radiant Cool.