HARTFORD, CT- In the Superintendent’s Conference Room (located at 960 Main St. in Hartford next to Capitol Community College) for the Hartford Public School System, Chairman Mark Poland and the Board of Education called a special meeting February 28th to discuss the proposed renewal of the Great Path Academy Magnet School in Manchester, CT.  Great Path, founded in 2002, is seeking to renew its charter with Hartford Public Schools instead of CREC, but has come across some unexpected resistance from the Hartford Public School system.  A Capitol Region Education Council (CREC) academy, Great Path shares a campus with Manchester Community College and is one of a growing number of “middle colleges” that align the latter years of high school with collegiate education.  Great Path initially served 11th and 12th grades but expanded to a 10th grade in 2008.  Part of their proposed internal reforms going forward include the formation of a 9th grade, which they believe (and historical data in Hartford confirms) will increase parental and student interest in the academy.  Given the educational framework laid out in President Obama’s recent State of the Union address, middle colleges will likely play a critical role in streamlining, coordinating and improving the path from high school to college and eventually employment.  These schools and similar academies that place high school students on college campuses have serious logistical issues they must first conquer if they wish to play an increasingly important role in the educational progression of American students.

The special session began with a presentation by Manchester Community College and Great Path’s management staff showing the school’s financial data and student body breakdown.  Board members immediately questioned why the school had shown a decrease in the amount (and ratio) of Hartford students at their academy.  For the Hartford Public School system to eventually take over Great Path (which they hope will occur within three years), the board strongly emphasized that that number would have to increase.  HPS would like to see a higher ratio of Hartford students than had been allowed by CREC if it is going to manage the academy going forward.  The ratio of Hartford to Suburban students peaked in 2009 but has since decreased.  From a quantitative standpoint, the number of Hartforders at Great Path has increased at a decreasing rate since 2007, and the Board and Superintendent Poland explicitly stated that it should be an area of particular concern.

After the meeting began as a prepared presentation by Great Path’s representatives and questioning by the board members, the session took a sharp turn when the discussion turned to school discipline at Great Path.  Great Path and Manchester Community College worked with Manchester State Senators to introduce Senate Bill 857, a recently rejected measure that would have treated Manchester Community College students and Great Path Academy students equally with regards to discipline.  The measure was defeated due to intense pressure from the American Civil Liberties Union and other educational groups.

Chairman Poland first inquired about Great Path’s stance on student discipline and Senate Bill 857, and the remainder of the meeting dealt with the issue of student discipline.  The polemical nature of the proposed legislation and of Great Path’s disciplinary history stems from their use of the Manchester Police Department as an enforcement body.  When a MCC student commits a crime, the police take over from a putative standpoint, but current Connecticut law dictates that a magnet school student must face disciplinary action (and, if necessary) a hearing through their home or “sending” district.  Senate Bill 857, Great Path’s representatives say, was designed to streamline and centralize the disciplinary process at magnet schools, especially those that share a campus with an institution of higher learning.  In a skeptical and prepared response, board members raised a statistic about Great Path saying 63 incidents had occurred in which a Great Path student was involved in that brought police involvement.  Speaking with Chairman Poland after the meeting, he agreed that there is a qualitiative difference between a high school student (especially an early high school student) and a college-age adult.  Clearly, Matthew Poland and the majority of the board were worried about the disciplinary tactics employed by Great Path.

The whos, whats, how and whys of student discipline are all complicated issues for a school like Great Path because of the mixing of collegiate and high school students in the same space.  Clearly it is not appropriate to treat college students as one would treat a high school student when it comes to disciplinary action and vice versa, making the issue a frustrating and contentious one for educational policymakers.  What was intended to be a terse special session for a previously tabled issue became a 90 minute debate on the complex reality that is magnet school, middle college and high school/college partnership student discipline.  The meeting ended without a final vote on the Great Path charter renewal, and the issue was further tabled.  While the board praised the school’s principal, teachers, management and campus, it found serious flaws with its disciplinary strategy and student body demographic ratio.  It seems like Great Path has hit some serious roadblocks on the way to a renewed charter through HPS, but the individual debate on disciplinary strategies on mixed campuses is indicative of the larger frustrations that officials at similar schools and policymakers face nationwide.  Ultimately, the qualitative differences between one student and another at a mixed educational setting will likely make the road to charter renewal a bumpy one for Great Path and similar institutions going forward.

******As an extra inclusion, the issue of student discipline in high school/college partnership environments appears to be left unsettled when it comes to Trinity College’s partnership with Hartford Magnet Trinity College Academy (HMTCA), formerly known as Hartford Magnet Middle School).  While the high school currently only has a 9th grade, it is expected to expand each year until it is a four year institution that allows seniors to take certain courses at Trinity.  The issue of how HMTCA students would face disciplinary action while taking classes at Trinity College have not been entirely settled in the school’s code of conduct.  It appears like a disciplinary strategy will be worked out in the two years between now and when the first HMTCA students step into a McCook classroom as students, but it is clear from the Great Path and Senate Bill 857 debates that the formulation of said strategy will likely be a contentious issue for HMTCA and Trinity College officials going forward.******

ADDENDUM: Great Path’s transfer from CREC to HPS was recently approved by the Board of Education at another meeting.  Here’s the article from the Hartford Courant. 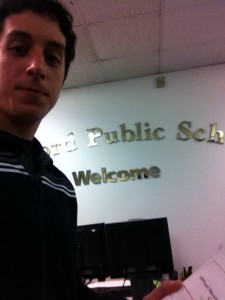 George Phillips is a sophomore at Trinity College (CT) from Allentown, PA. A Public Policy and Law and Urban Studies double-major, he also works with Hartford's iQUILT plan. View all posts by George T. Phillips

One thought on “Great Path Magnet School and Student Discipline”