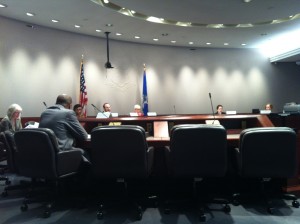 HARTFORD, CT – On February 29, 2012 the Interagency Council met at the Legislature Office Building to discuss the Achievement Gap in Hartford.  The meeting was called “Interagency Council on Ending the Achievement Gap Meeting.”  About 20 people attended this meeting and there were 9 delegates on the panel.  The meeting started with Shefan Dryor speaking about “Community Schools for Connecticut.” Community Schools for Connecticut’s motto is “Every child and every school is capable of excellence given the right conditions for learning. “  Dryor touched on many different components of the Community Schools, like what does a community school look like, how do they accomplish the schools, and what do Community Schools cost.  He continued to demonstrate the various details of his plan through the usage of 6 key principles. In order of 1-6 his principles state:

2. Authorize the intensive interventions and enable the supports necessary to turn around Connecticut’s lowest-performing schools and districts

3. Expand the availability of high quality school models, including traditional schools, magnets, charters, and others

4. Unleash innovation by removing red tape and other barriers to success, especially in high performing schools and districts

5. Ensure that our schools are home to the very best teachers and principals working within a fair system that values their skill and effectiveness over seniority and tenure

6. Deliver more resources, targeted to districts with the greatest need provided that they embrace key reforms that position our students for success

These six principles were all accepted and applauded by the members of the panel.

One of the panel delegates responded to Dryor by saying “I applaud what you did, it was very well executed,” she followed this compliment by telling Dryor that she believes education is the cornerstone of economic success so whatever she could do to support him, she’d be more than willing.

After we heard from Shefan Dryor, Miguel Cardona, and the Principal of Hanover Elementary School, spoke a few words about how he was excited to hear about the new plans for Community Schools in Connecticut.  Cardona said, “I’m really glad to see urgency, we need urgency!”  Cardona stressed that although the students are their first priority in education, people need to reach out to the parents in order to really help schools succeed.  Miguel expressed his hopes that they’d get many people to come and support these new Community Schools.  He also quickly mentioned the fact that there were hundreds of people at the meeting to keep liquor stores open later in Connecticut (a fact that many people in the audience were snickering about) and that he hoped they could get a similar turn out.

One of the more interesting parts of the meeting was when David Fink spoke about housing and how it can relate to educational success.  Fink started first by saying that he supported the new ideas for the Community Schools but he said that failing to address the period between 3pm and 9am when students are out of school could make the classroom gains “unsustainable.  Fink gave us some solid facts right away saying, “The problems faced by children and their families are quite simply, the lack of supply of affordable homes.  We don’t have a wide enough array of affordable options. Because of a supply shortage, 51% of renters and 39% of homeowners spend more than 30% of their income on housing.  Of about 400,000 renting households in CT, 27% make less than half the median income and spend more then half that meager income on housing!”  Fink also continues by saying that parents who cannot afford nice housing, generally live in old houses that may still have lead paint and asbestos which can lead to bad health problems for the children.  I found these facts to be disheartening.  It is very interesting to think that while everyone is worried about education reform, there are so many factors outside of the classroom that influence a students education.  Fink told us that in order to develop more affordable housing, we should build these houses along the railways so that low-income families are in easy access of transportation to schools.

The panel agreed with Fink saying that housing and support outside of the school are both extremely important but they questioned what the zoning boards in many towns would say about creating low income housing in their neighborhoods.  Fink was well prepared with answers.  He told us that you have to tell the zoning boards things like, there won’t be criminals moving into the houses, there will be hard working parents who want to help their kids succeed.  He says, “You tell the zoning board these things, and they’ll believe what they want.”

Overall, the feeling of this meeting was very hopeful.  People called this year “the year of education” and everyone seemed excited and positive about the Community Schools.  The next meeting for the Leadership Team is on April 12th.

Bobby and Caroline inside the Legislature Building