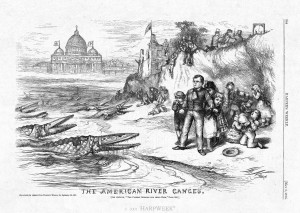 What was the companion article to Thomas Nast’s political cartoon? In our next class we will examine a political cartoon by Thomas Nast, titled “The American River Ganges: The Priests and the Children,” which appeared in Harper’s Weekly, May 8, 1875, page 384. The cartoon is freely available online. In fine print at the bottom, it refers to a companion article, “The Common Schools and their Foes,” on page 385 of same issue. Describe your search strategy to locate the article and summarize its content. (Hint: Sometimes the past is only available in print.)

This week, I had the opportunity to do some real detective work to find my source. The first stop of my search was the Watkinson Library at Trinity College (Hartford, CT) and it happened to be my only stop. I was greeted at the door by an extremely well-dressed elderly gentleman, Mr. Peter Knapp, Special Collections Librarian and College Archivist who was eager to hear about my problem and see how he could be of assistance. When I showed him Thomas Nast’s political cartoon, “The American River Ganges,” I could tell by the smile on his face that he was quite sure what I needed. He asked, “Harper’s Weekly?” and with an astonished look on my face, I simply responded, “Yes, please.” I took the courtesy of leaving the main floor for a few minutes while he searched for the Harper’s Weekly 1875 Edition (It is standard procedure that guests of the Watkinson cannot be left unattended on the main floor.) 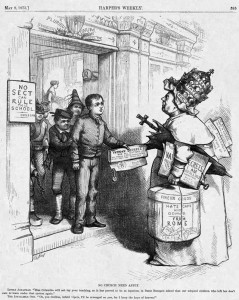 When Mr. Knapp returned, he brought with him an extremely dense book titled “Harper’s Weekly – 1875” and suggested that I could find what I was looking for on page 385 (in reference to American River Ganges). When I opened to page 385 I found the companion article titled “The Public Schools and its Foes.” Directly above the article was another political cartoon by Nast. This cartoon titled, “No Church need apply” depicts a Catholic bishop handing out Vatican decrees to young school-aged boys. The boys stood in the doorway of a school, and the sign beside the doorway read, “No Sect can rule this school,” the main theme of the companion article.

The companion article written by Eugene Lawrence highlighted the greatest enemy of the common schools as being the Roman Catholic Church and its leader Pope Pius IX as well as other religious/political institutions that did not promote American common schools. The article favored the condition of the common schools and emphasized what we consider today to be the separation of church and state:

“Their people have become conscious that the common school is the source of ease, comfort, wealth; that it doubles the value of their lands, build towns, factories, railroads; and hence all over the south there is a plain advance toward a new condition of society.” (p.386)

Lawrence speaks to his readers as an advocate of reason and truth, he says that the “newspaper is the natural fruit of the common school” (p.386) which would allow readers to give credence to his published article on the evils of the Roman Catholic Church and other Religious institutions and their corruption of American schools:

“At Des Moines, when an episcopal clergyman assailed the common schools from his pulpit, members of the congregation rose and left the church, in protest of religious bigotry…” (p.386)

He goes on to say that schools under the jurisdiction of Pope Pius IX were “never needed” and questions why they were built in the first place – while alluding to the fact that they were built to contest the traditional common school system.

Lawrence mentions that the public (common) schools offer “ample room for all the children of the city” (p.386) in reference to the many parochial schools in New York City. He goes on to say that Papal priests were in association with Boss Tweed and Peter Sweeney and had a direct involvement as conspirators in the political ring. This piece of the article was towards the very end – almost as if to tell his readers: if you still aren’t convinced…here’s more proof.

Lawrence ends his piece with two very important quotes, which sum up his article on the separation of church from American schools, but even more importantly, the vilification of all who opposed the common schools. The first quote stood out to me because of the notion that those who did not support common schools must not support their country as loyal Americans:

“No patriotic American of any creed of race will suffer his own honest and necessary principle of un-sectarian education to be tainted by any dangerous compromise…” (p.386)

Finally, Lawrence urges his readers to understand that: “the only sure defense we have against it, is to vote it down…” (p.386) in reference to the church’s presence in American schools and the political authority that  common citizens yield through their right to vote.

A very special thank you to Mr. Peter Knapp and the Watkinson Library staff for allowing me to use their vast archives.

One thought on “No Sect Can Rule This School: A Journey through Harper’s Weekly (May 8, 1875)”