We arrived at M.D. Fox Elementary at 4:45 PM and headed to the auditorium where this month’s Hartford Board of Education meeting was being held.  A crowd was already gathering at its closed double-doors. A safety officer guarding the door informed us that they would not be opened until 5:00 pm. At 4:50 the doors were opened. Everyone shuffled in with papers in hand, filled with speeches, data, and open letters. Dozens of members from the Hartford Federation of Teachers, a chapter of American Federation of Teachers, packed in. Each of them sported a white t-shirt adorned with the HFT logo emphasizing their presence. One hung a handwritten sign over her neck that read, “HARTFORD COMMUNITY SHOUT: HARTFORD PUBLIC SCHOOLS DISTRICT IS CUTTING ART OUT.” Attendees lined up at a small folding table accommodating two microphones to sign up to speak. The opportunity to sign up was eliminated once the meeting was called to order by vice chair Beth Taylor, an usual move according to regular attendees noting that meetings typically run for hours.

Typically, these meetings consist of one or two dozen people. This one filled nearly every seat in the auditorium. The meeting came at the brink of proposed layoffs due to budget cuts and the consolidation of the upper and lower schools at Bulkeley High School’s located on Hartford’s South End. Jobs in the school’s lower school could be eliminated. Luis Delgado, a staff member at Bulkeley was the first to speak at the meeting and set the tone of displeasure, frustration, and confusion of succeeding speakers by declaring that there was a “Trump-like attempt to build a wall to divide us,” referring the school community and the district. Jane Russell, School Governance Council co-chair and a parent of three children who each attended Bulkeley High School expressed concerns over what she felt was a lack of transparency between the board and the council. “Make decisions with us, not to us,” was her request. According to her, budget changes were not voted on by the governance council. 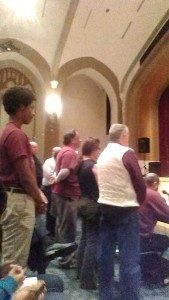 Levey Kardulis, the head custodian at Bulkeley pointed out nonessential expenses by the school district. One example he made was the location of the school district’s administrative offices, “paying rent at the G. Fox building,” located in Downtown Hartford where the cost of rent is notoriously high. Operating in a building downtown instead of in one of the vacant properties owned by the district was money that could be going elsewhere. A statement that resonated with many teachers who claimed that their schools lacked necessary implements such as computer labs and library printers.
Another school represented by meeting attendees and speakers was Martin Luther King Elementary located in the city’s North End neighborhood. The building has been in Hartford’s North End since the 1920s. It was Thomas Snell Weaver High before its renaming in the 1970s and members of the community have built ties there. Closure for renovations will require the students to be relocated to a temporary location at the newly renovated West Middle Elementary School in the city’s Asylum Hill neighborhood, a move many have welcomed. However, many in the community fear that instead of a makeover, the school may close for good. One parent stressed the school’s dilapidating physical structure and pointed out the lack of transparency between the school’s community and the school district, a theme that was widespread throughout the evening. As she pleaded for a meeting between the superintendent and parents, twenty community members marched to the front of the auditorium to stand in front of the board wearing green ribbons, in solidarity with the parent speaking. “Yes or no?” She asked again. The answer was yes.